Carl Frampton: I HAVE to beat Tyler McCreary 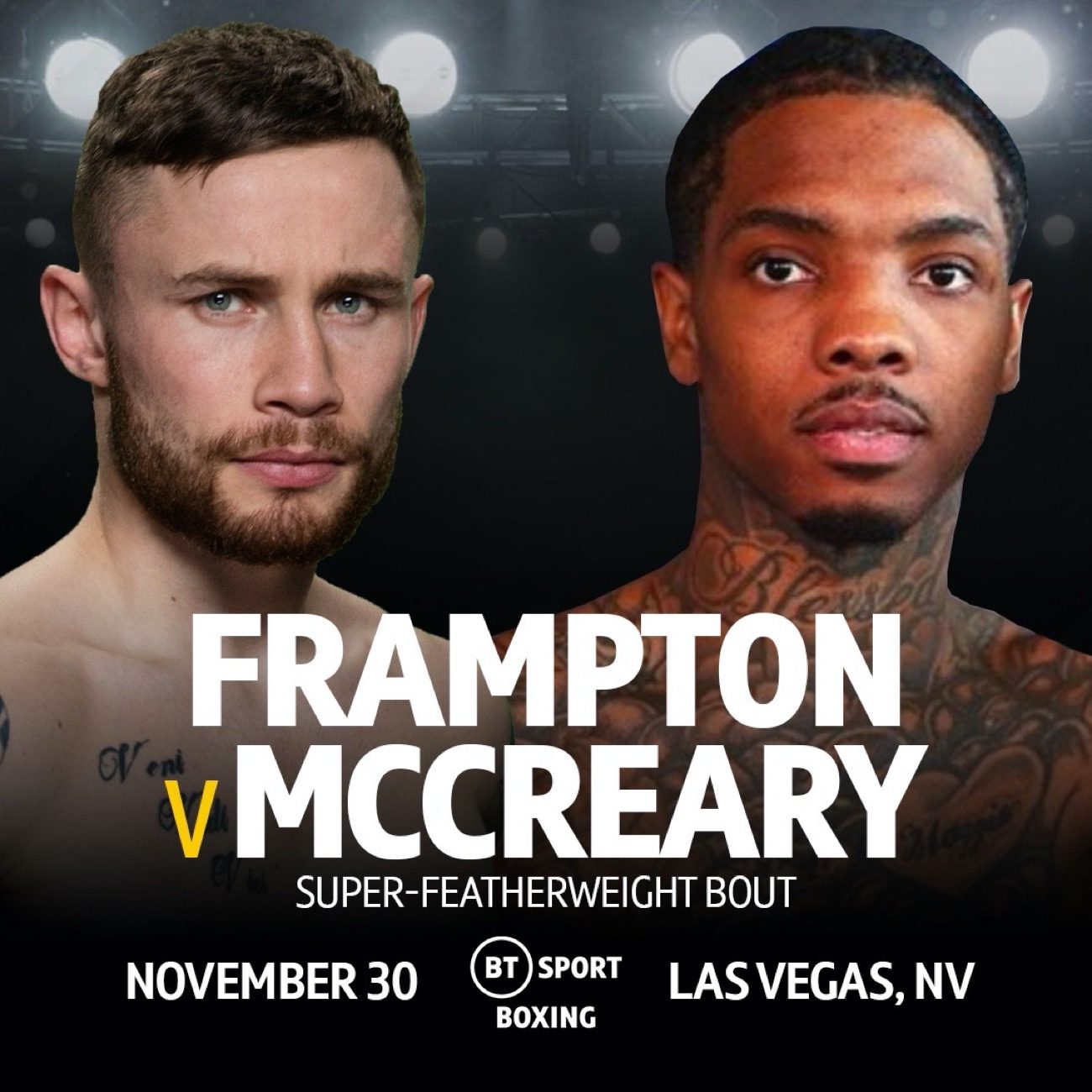 By Charles Brun: Carl Frampton is in a MUST win situation for his fight this Saturday on the Oscar Valdez card LIVE on ESPN+ in Las Vegas, Nevada.  Former two division world champion Frampton (26-2, 15 KOs) faces Tyler McCreary (16-0-1, 7 KOs) in a 10 round fight at a 128-lb catchweight.

A victory for the 32-year-old Frampton could lead to him getting a world title shot at super featherweight. That’s what Frampton was, because he wants to capture his third division world title. It’s not going to be easy for Frampton, given that the champions at 130 are all solid fighters.

Frampton is signed with Top Rank Boxing. So what they’re likely going to steer Frampton into the direction of him fighting for the WBO super featherweight title against champion Jamel Herring, if he still has the belt by the time Carl is ready to fight for it.

Valdez will be getting a shot at Herring before Frampton does. So there’s a good chance that Frampton will wind up taking on Valdez for the WBO title in 2020. Frampton will need A LOT of luck for him to beat a talented fighter like Valdez.

Frampton vs. McCreary is the co-feature on the Oscar Valdez vs. Andres Gutierrez (38-2, 25 KOs) card this Saturday, November 30 at the Chelsea Inside The Cosmopolitan of Las Vegas. This is  doubleheader. Both fights are scheduled for 10 rounds on ESPN+.

McCreary will be looking to upset Frampton

“I’m looking forward to this fight. It’s been nearly a year since I’ve been out of the ring,” said Frampton to Top Rank Boxing. “I’m fighting Tylor McCreary on Saturday. A good, hungry, undefeated young kid. This is his big chance. I’m pretty sure that if he beats me, his next fight will be for a world title. But it’s not going to happen. I’ve prepared very, very hard for this fight,” said Frampton.

Carl has been out of action for 11 months since his last fight against IBF featherweight champion Josh Warrington on December 22, 2018. Frampton lost that fight by a 12 round decision, but it was close. Warrington’s work rate and energy was too much for the weight drained Frampton.

Carl was supposed to come back months ago, but he suffered a freak hand injury after a pillar fell on him while he was at a hotel.

The Jackal Frampton treating fight like he’s the underdog

“I’ve prepared like I’m an underdog, and I’m going in to put on a show,” said Frampton in talking about his fight with McCreary. “I want to win this fight, but I want to knock this kid out. I’ve had some huge fights in my career. No matter who my opponent is, it’s always going to be the biggest fight. The situation I’m in now it’s a MUST win,” said Frampton.

McCreary is a threat to Frampton, because of his youth and his size. Frampton is moving into a new division at super featherweight, and he’s taking on a lightweight in McCreary. You can’t assume anything in this fight. Although the 5’9″ McCreary isn’t one of the best fighters at 130 or 135, he’s still a solid fighter, and he’ll have the size advantage over the 5’5″ Frampton. Carl will be giving away 4 inches in height to McCreary, and that could make it tough for the Irish fighter to land his shots.

McCreary has a good blueprint to follow in how to beat Frampton by following what Warrington did in outworking him with volume punching.

Frampton: I must win this fight

“I have to win this fight to fight a champion in my next fight,” said Frampton. “I want to fight for a world title in my next fight, and I must beat Tyler McCreary. That’s why I’m looking at it as the most important fight of my career. My plan is to become a three-weight world champion.

“That’s my goal. Ireland has a rich history in producing world champions. We’ve produced so many great fighters, and we’re still doing it. But the guy on top, and the first guy to win three division world titles would mean the world to me,” said Frampton.

It’s believed that Frampton, 32, will retire from boxing if he loses to McCreary. He doesn’t want to just stick around as a contender, and no longer be a world championship level fighter. If Frampton beat a non-ranked fighter like McCreary, then it’s clear that he won’t be able to defeat the champions at 130. As it is, Frampton might not have the youth, size and power to defeat any of the champions at super featherweight.

The one guy that you can say that would be good for for Frampton is WBC 130-lb champion Miguel Berchelt. That would be a nightmarish fight for Frampton to have to deal with the talent of Berchelt. If Top Rank steers Frampton towards a title shot against Berchelt, it’ll likely badly for Carl.