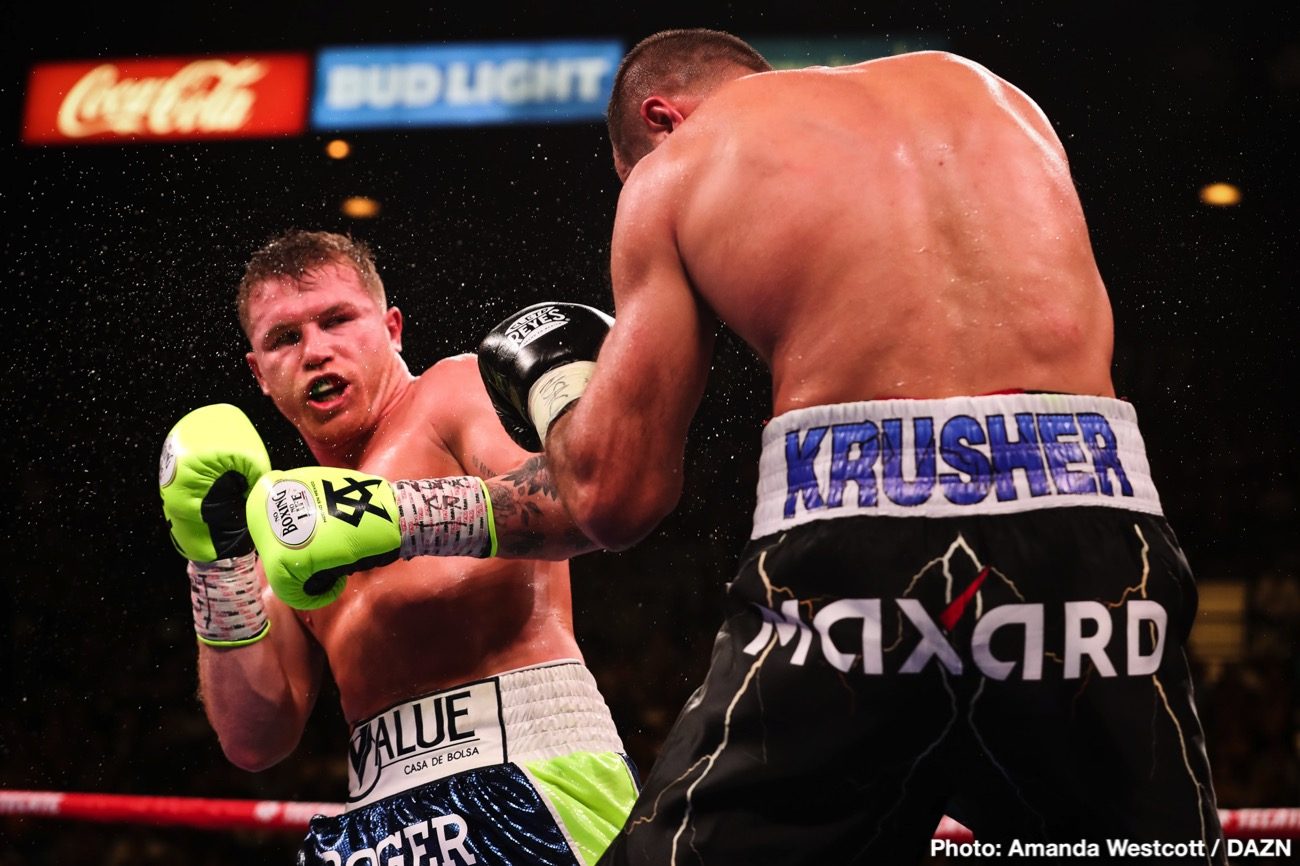 This is a predictable move on Canelo Alvarez’s part in relinguishing his WBA title, since it was a low prestige secondary title with little value. Callum Smith is considered to be the REAL WBA super middleweight champion by virtue of his win over George Groves last year.

Canelo’s next move is open for debate. While Hearn continues to say that Canelo will either be fighting Callum Smith or Billy Joe Saunders next, it’s unlikely he’ll face either of those fighters. Hearn doesn’t realize that CASUAL American boxing fans don’t know who Saunder or Callum Smith are. They don’t know these guys. As such, Canelo gains NOTHING from fightng Callum or Saunders. Those are wasted fights for Canelo. It’s more likely that Canelo will fight of these guys next:

It didn’t help Canelo to be viewed as the secondary champion BELOW Callum. Hearn wants Callum to be available for Canelo or Billy Joe Saunders. Fighting Ryder again wouldn’t be a big money fight that Callum is looking for, and there would be a lot to lose for him if he gets beaten.

With Canelo’s popularity, he had no reason to hold onto the WBA ‘regular’ 168-lb title, because he calls the shots in the division against anyone. The 29-year-old Canelo won the WBA belt last December in stopping then champion Rocky Fielding in the 3rd round at Madison Square Garden in New York. It was troubling that Canelo fought Fielding in the first place, considering that Callum had already knocked out in the 1st round in 2015.

If Ryder, 31, were to agree to face the undefeated Allen (22-0, 14 KOs) for the vacant WBA 168-lb belt, he would be taking a lot of pressure off the shoulders of both Hearn and Callum Smith.

“The WBA ‘regular’ title, which is held by Canelo, is now vacant, Lennox Allen has been put forward as the WBA Gold champion. John, in my opinion, should be ordered to fight,” said Eddie Hearn to Matchroom Boxing.

Ryder (28-5, 16 KOs) lost a controversial 12 round unanimous decision to WBA Super World super middleweight champion Callum Smith (27-0, 19 KOs) last Saturday night in Liverpool, England. A lot of people felt that a robbery in plain daylight, and Hearn and Callum are NOT interested in giving Ryder an immediate rematch despite the controversy.

Hearn is talking about wanting Ryder to either fight Lennox for the WBA ‘regular’ belt or have fight someone else, and then ask the WBA to make him the mandatory for Callum in 2020. In the meantime, Hearn wants Callum to be available to fight Canelo Alvarez or WBO super middleweight champion Billy Joe Saunders. Hearn says if neither of those fights happen for Callum, then he would be open to making a rematch with Ryder. He thinks that’ll be a big fight in the UK in 2020.

If Ryder beats Lennox for the WBA ‘regular’ 168lb title, he WON’T be seen as the champion by the boxing public. He’ll be the secondary champion below Callum Smith. It would be an appeasement move on Hearn’s part to have Ryder fighting Allen for the WBA ‘regular’ title, but it wouldn’t be the fight that he wants. Ryder wants the rematch against Callum, who he feels he beat last weekend.

It’ll be interesting to see what Ryder’s next move is. If he agrees to face Allen, then he can flushing any chances of a rematch against Callum if he loses that contest.


« Eddie Hearn working on Usyk vs. Chisora fight for February

Emanuel Navarrete wants Luis Nery to fight him at 122 »