By Scott Gilfoid: Referee Michael Griffin says Anthony Joshua didn’t quit in the 7th round against Andy Ruiz Jr. last June. He says Joshua (22-1, 21 KOs) wanted him to give him more time to recover and he couldn’t let him have that under the rules. Griffin couldn’t give Joshua more time. As badly hurt as Joshua was, he might have needed minutes to recover, and not just seconds.

AJ spit his mouthpiece out to try and buy time

Joshua had been knocked down twice in the 7th from the thunderous punches from challenger Ruiz (33-1, 22 Kos),and he was desperate to buy time to try and survive the round. The first thing that Joshua pulled out of his bag of tricks was him spitting out his mouthpiece after the second knockdown.

The second thing Joshua did was turn his back on the referee Griffin. Finally, the last straw was when Joshua chose not to walk forward off the ropes. At that point, Griffin had no choice but to waive it off. Joshua didn’t quit in the technical sense, but her certainly quit in reality.

Referee Griffin: Joshua wanted me to give him those seconds

“I was looking into his eyes. He was struggling with something. And he wasn’t quitting. He was looking for more time,” said referee Michael Griffin about Joshua after he was knocked down for the second time by Ruiz in round 7.

“He turned his back on me. I picked up his mouthpiece. I don’t think in any sense he was quitting the fight. He just wanted those seconds, but the rules don’t allow me to give him those seconds,” said Griffin. “If you watch that fight, and you look at Andy in the corner, he’s reading the same body language as me,” said Griffin.

The way Joshua looked, Griffin could have given him an hour to recover, and he still have been dropped straightaway. There was a big gap in talent between him and Ruiz, and it was a situation where a referee couldn’t save him. Joshua needed a lifeline, but there was none there. His trainer Rob McCracken had no ideas to keep him getting knocked out. If he had spoken up during training camp, he would have told him not to come into the fight at 247 lbs, looking like a bodybuilder.

It would have been interesting if Griffin had given Joshua the time he wanted to try and recover. If Griffin had given Joshua ages to recover, the fans would have been all over the referee afterwards. There was no excuse to not stop the fight. Joshua had already spit out his mouthpiece, and then he didn’t walk forward when told to. He even turned his back on the referee. It was endless all the things Joshua was doing to try and recover. 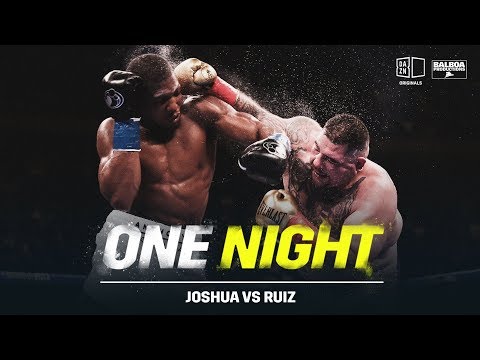 The referee that worked Joshua’s fight against Joseph Parker was badly trashed by boxing fans during and after the fight with the way he officiated. The referee didn’t allow inside fighting, which gave Joshua a big advantage. It was the only advantage that he needed to defeat the shorter fighter Parker.

“Arms on the ropes, it means he doesn’t want to go out there,” said Sylvester Stallone. “He’s done. He’s exhausted, he has no wind, and he’s been beaten down in front of all his fans. Stop this nightmare. He’s like, ‘I’m exhausted, I don’t know what to do, I don’t have a strategy to beat this guy.

“He’s getting stronger, and I’m getting weaker. I mean, this guy is running through the alphabet of emotions. He’s laughing on the outside, crying on the inside. He’s terrified. That’s when the pure savagery kicks in. Andy smells blood, and he [Joshua] smells defeat. He spit the bit,” said Stallone.

What Stallone isn’t saying is Joshua was effectively done after the 3rd round, because he had nothing left from that point. Ruiz wore Joshua out with his flurry of heavy shots that he hit him with in the 3rd, and that emptied his gas tank. If Ruiz had responded the way that Wladimir Klitschko did by backing off, and letting Joshua recover after dropping him, he might have gotten his second wind. Ruiz wasn’t crazy.

Ruiz knew that he couldn’t let Joshua off the hook the way Wladimir did, because his chances of winning a decision against the popular fighter were slim. It was clear that Ruiz had to knock him out to win, and you can argue the same thing applies for their rematch on December 7.

“I think he was just psychologically defeated,” said Dolph Lundgren about Joshua in the 7th round. “He had no Plan-B. He had nothing to pull out of the bag. That was it.”

Joshua tried to box Ruiz after he was knocked down twice in round 3, and he had a small measure of success in doing so. But once Joshua opened up with the heavy artillery again in the 7th, it was like a grenade going off.

Ruiz really went after Joshua at that point, and he quickly put him down twice. It was obviously a mistake for Joshua to wake a sleeping giant when he hit Ruiz with a hard right hand in the 7th. He seemed to have him looking passive in rounds 4-6.

That might have been because Ruiz was too tired from his energy expenditure in the 3rd, because he was carrying around a lot of weight. But after Joshua hit Ruiz with a hard right in the 7th, it was like a wakeup call for him to spring into action.

At that point it was like 3 all over again with Ruiz charging forward, and nailing Joshua with combinations to the head. Joshua tried to fight back, but was quickly dropped. After he got up, Joshua looked exhausted and hurt, and was an easy mark for Ruiz to drop for the second final time in the round.

“A little embarrassed. He may have thinking, ‘I got no chance to win,'” said Mike Tyson about Joshua. “Everytime the guy touches him, he goes down. He looks pretty defeated. He’s not looking at the opponent. He’s looking at the referee. He indicated that he’s a defeated man right now,” said Tyson.

“And he really wasn’t into this. He was consciously doing this,” said Evander Holyfield. “It’s not like somebody knocked it out. He spit it out.”