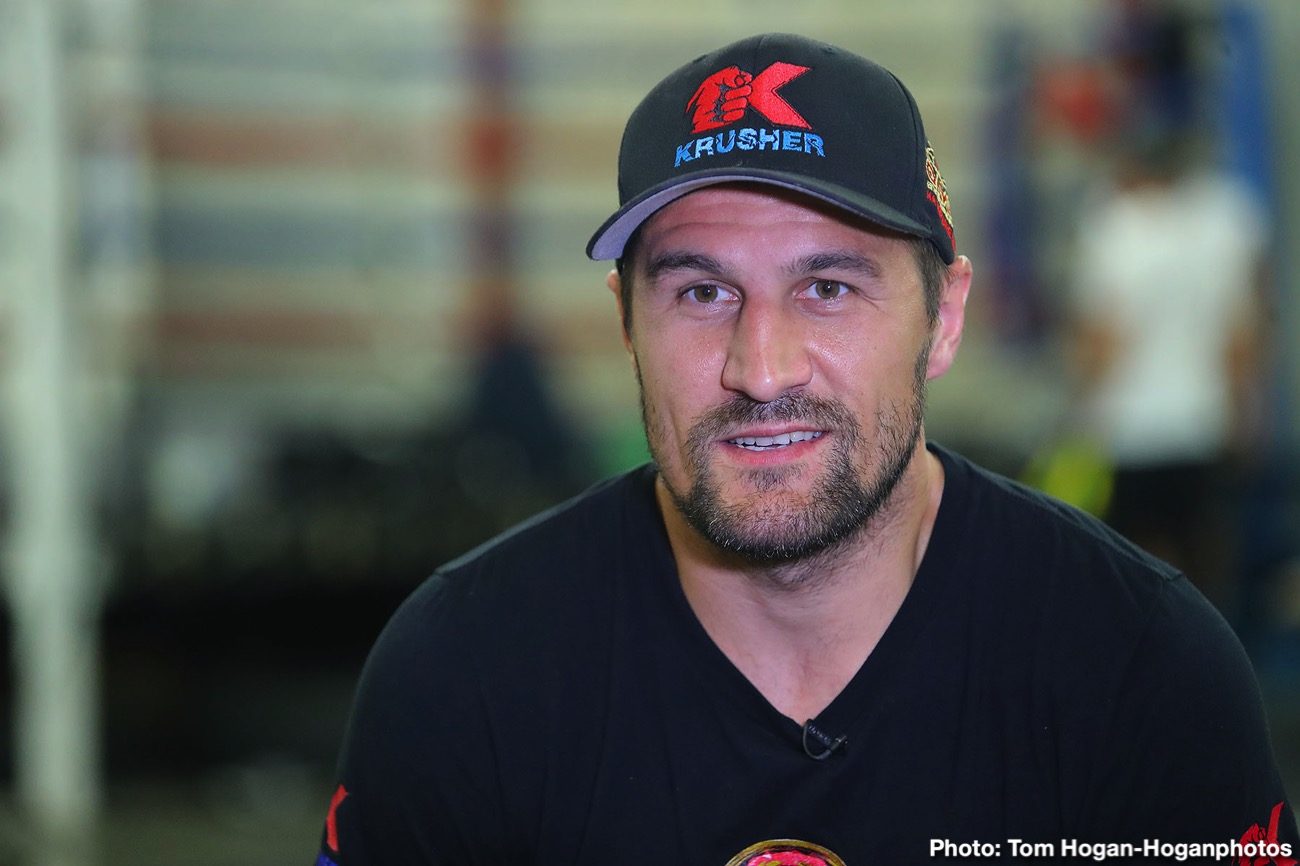 The best chance Kovalev has of beating Canelo may be if he targets his midsection. Beterbiev defeated Gvozdyk with body shots. Considering how difficult it is for fighters to hit Canelo with his head shots, it’s wise to try a different approach.

Kovalev, 36, wants to face IBF/WBC champion Beterbiev (15-0, 15 KOs) in a unification fight. Although Kovalev lost to the 2-time Russian Olympian Beterbiev in the amateurs, things could be different with them fighting in the professional ranks.

Canelo the favorite against Sergey

Kovalev (34-3-1, 29 KOs) is the underdog against the smaller 5’8″ Canelo Alvarez (52-1-2, 35 KOs), who is moving up 2 weight classes to challenge him for his WBO title at 175. The odds-makers believe that Canelo’s high level skills will easily transfer over to the light heavyweight division, and wind up being too much for Kovalev.

“I don’t think Canelo will beat me because I’m doing my workouts to get a victory over him, because I’m really motivated,” said Kovalev to Fighthub. “And I saw right now last Friday between Beterbiev and Gvozdyk, and this is big motivation to fight Beterbiev. I never fought him in professional boxing, but I really want. Right now this is big motivation to get victory over Canelo on November 2,” said Kovalev.

It would be smart for Kovalev to try and implement Beterbiev’s style of fighting against Canelo, because it’s almost impossible to hit him with head shots. Canelo uses a lot of head and upper body movement to dodge shots aimed upstairs. It’s rare that Canelo’s opponents target his body due to his counter-punching ability. It might be worthwhile for Kovalev to go after Canelo’s midsection, because that’s an area that can be hit. Canelo has slow feet, so he’s not going to be able to dodge Kovalev’s body shots.

Beterbiev may not be available to face Kovalev until 2021. He’s got fights against Meng Fanlong and WBA light heavyweight champion Dmitry Bivol likely for 2020. Fanlong is Beterbiev’s International Boxing Federation mandatory challenger. Beterbiev can’t delay that title defense any longer. Beterbiev’s promoter Bob Arum wants him to face Bivol after that in a unification. While it’s possible that Kovalev might be able to get the Beterbiev fight ahead of Bivol, it’s not likely.

“No, I didn’t have injuries from the last fight, but it was a short rest,” said Kovalev about his recent title defense against Anthony Yarde. “It was just 3 weeks. I started my training camp on September 15. Right now, I feel good. I like when between the fights is a short rest, because my body doesn’t lose shape from the previous fight,” said Kovalev.

Kovalev, 36, fought just two months ago in defeating his WBO mandatory Anthony Yarde (18-1, 17 KOs) by an 11th round knockout on August 24 in , Chelyabinsk, Russia. That fight was a difficult one for Kovalev, as he was hurt in the 8th round, and almost knocked out by Yarde.

It was a lucky break for Kovalev that Yarde had nothing left after the 8th. He had expended too much energy trying to stop him. That fight might have been stopped in the 8th round under different circumstances. Kovalev was fighting in his hometown of Chelyabinsk. Some boxing fans believe that factored in to the referee not halting it.

“I’m thinking about one thing: I should win the fight,” said Kovalev about his bout with Canelo. “He’s most dangerous is his left uppercut, right hook, and he has very good defense, and his head defense. It’s really hard to touch him, and get this target. It won’t be an easy work. It’ll be a tough fight against a tough guy. Right now, he’s not losing the weight. He will be stronger,” said Kovalev.

Canelo is dangerous with his uppercuts in close. As such, Kovalev will need to keep him at a distance to avoid those punches. Kovalev needs to try the same approach Beterbiev used in beating Gvzodyk by throwing long right hands to the midsection of Canelo. Unfortunately for Kovalev, he’s not as skilled as Beterbiev on the inside, so he can’t fight Canelo that way. Beterbiev would have no problems fighting Canelo in an inside war, and likely stopping quickly. Kovalev’s inability to handle body shots makes that approach untenable.