Jerwin Ancajas vs. Jonathan Rodriguez on November 2 on ESPN 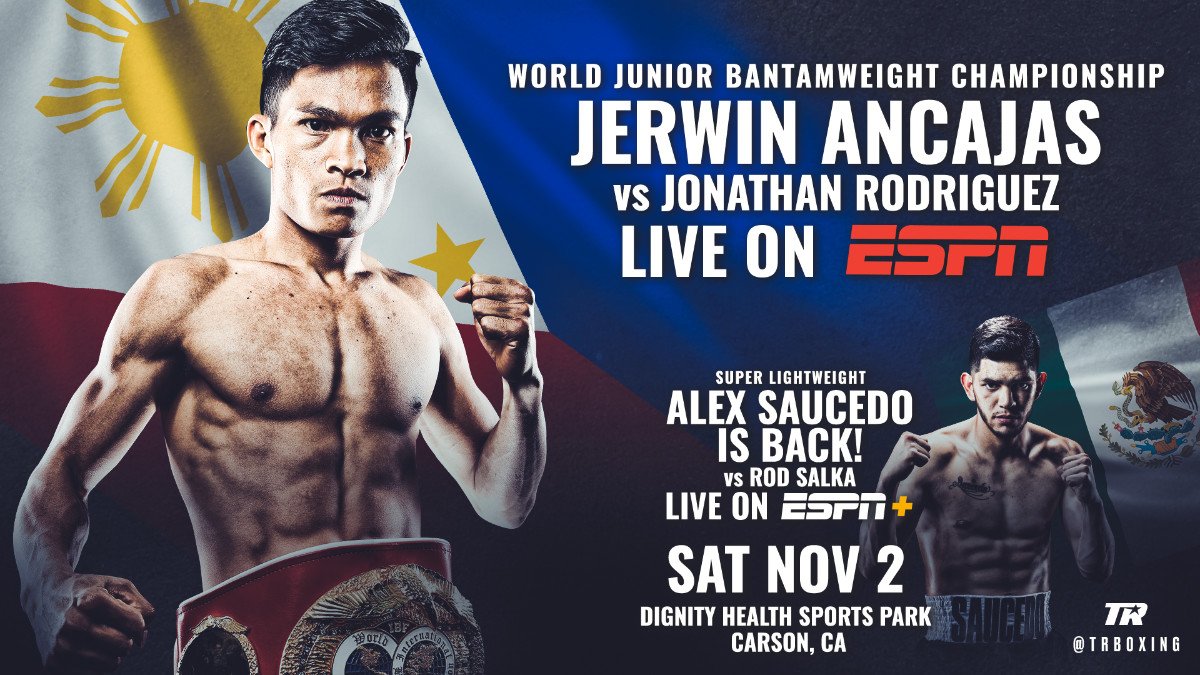 The undercard will see the return of Oklahoma City’s Alex “El Cholo” Saucedo, who is looking to rebound from his first career defeat against Rod Salka in an eight-round super lightweight bout. Saucedo-Salka and the rest of the undercard will stream live on ESPN+, the leading multi-sport streaming service, beginning at 7 p.m. ET/4 p.m. PT.

“I am looking forward to this fight because Rodriguez brings the Mexican style to his fights, and Mexican and Filipinos make the best fights,” Ancajas said. “I want to thank Top Rank, Senator Manny Pacquiao and my manager, Joven Jimenez, for their continued support. It is going to be a war, and to my Filipino fans, I look forward to putting on a show for you in Carson.”

“I plan on taking full advantage of this opportunity,” Rodriguez said. “Ancajas is a great champion, but my time is now. It is time for a new face at 115 pounds.”

Ancajas (31-1-1, 21 KOs) is one of boxing’s longest-reigning and most active champions, as only two current world champions (Deontay Wilder and Wanheng Menayothin) have more title defenses. The dynamic southpaw won the title in September 2016 and defended his belt three times apiece in 2017 and 2018. He last fought May 4 in Stockton, California, knocking out Ryuichi Funai in six rounds.

This will be Ancajas’ fourth consecutive bout in California, but the first time he’s showcased his skills in Southern California. Rodriguez (21-1, 15 KOs) is a dangerous foe who has won five in a row since a split decision defeat spoiled his unbeaten record. He is coming off a career-best win June 7 in Zihuatanejo, Mexico, when he knocked out former two-time world title challenger Felipe Orucuta in the 10th round.

Alex Saucedo looking to bounce back from loss

Saucedo (28-1, 18 KOs), who turned 25 years old in June, burst onto the world stage in 2018. He overcame cuts and a swollen face to knock out Lenny Zappavigna in front of his hometown fans at the Chesapeake Energy Arena in a Fight of the Year contender. He returned to the Chesapeake Energy Arena last November and was knocked out in seven rounds by Maurice Hooker in a failed bid for the WBO junior welterweight world title.

Saucedo regrouped and enlisted the services of a new trainer, Pedro Neme. Saucedo and Neme have been working together for the past four months and have focused on refining his defensive skills. Salka (24-5, 4 KOs) has not fought since an April 2018 knockout loss to former world champion Francisco Vargas, but before the Vargas defeat, he had won five in a row.

“I am excited to finally be back in the ring,” Saucedo said. “And I enjoyed my time off, but the time was right to come back. I have a new team and can’t wait to show everyone the new Alex Saucedo. On November 2, I will steal the show.”

“I’m pumped to be fighting an opponent like Hiroki Okada,” Molina said. “We know he’s a tough fighter, but these are the types of fights we are looking for. A win over him will get me one step closer to a world title shot, and that’s what we are aiming for. He’s coming off a loss to Beltran, so we know he’s hungry to get back in the win column. We are going to be ready for anything he brings to the table.”

Promoted by Top Rank, in association with Zanfer Promotions and Peltz Boxing, tickets for this world championship event are priced at $125, $85, $65 and $30 (not including applicable fees). Tickets can be purchased by visiting AXS.com, charge by phone at 888-9-AXS-TIX (888-929-7849) and in person at the Dignity Health Sports Park Box Office (Monday through Friday from 10 a.m. PT to 6 p.m. PT).