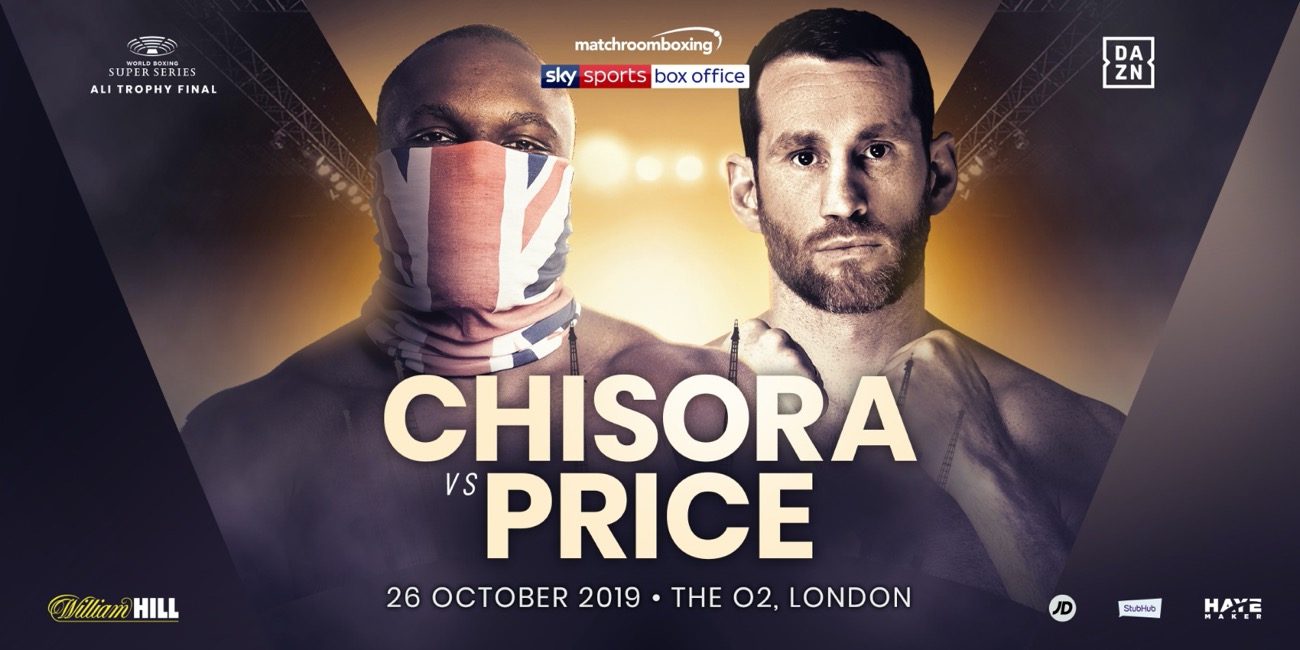 By Charles Brun: As expected, David Price will be stepping in to replace the ill Joseph Parker to be the opponent for former heavyweight champion Dereck Chisora on October 26 on Sky Box Office at the O2 Arena in London, UK. Chisora-Price is the chief support for the Regis Prograis vs. Josh Taylor fight in main event.

Although there’s a lot of grumbling from boxing fans about Chisora fighting the aging 2nd tier heavyweight Price, but this is likely the best that could be found under the circumstances. The quality heavyweights wouldn’t want to take a fight on 3 weeks’ notice against a physical guy like Chisora. Price has the power, size and boxing skills to beat Chisora, What he lacks is the punch resistance and the stamina. If Price can stay on the outside, and box for 12 rounds, then he can win this fight. Chisora’s power and relentless pressure will likely be too much for Price. The looping shots that Chisora throws will be an issue for Price unless he can lean backwards to avoid them the way Tyson Fury did in his two one-sided wins over Chisora.

Having the 6’8″ Price face Chisora gives the British boxing fans a fighter that they’re well familiar with so it works to attract the casuals in the UK to want to order the fight on Sky Box Office PPV. However, the fight isn’t expected to be competitive despite Price recently looking good in stopping the well worn domestic level heavyweight Dave Allen in the 10th round on July 20.

Talented heavyweights were considered for Chisora

Matchroom Boxing promoter Eddie Hearn had been considering a number of arguably MUCH better heavyweights to step in and potentially face Chisora. They are as follows:

All four of those fighters likely would beat Chisora, which might be one of the reasons why they didn’t get selected. Hearn is trying to ramp Chisora up to put him in position to fight for a world title. That can’t happen if he gets picked off by Povetkin, Wallin, Rivas or Hunter. Hearn said the 6’6″ Wallin wasn’t a good option because Chisora doesn’t like fighting southpaws.

Wallin’s height might have been a problem as well, as Chisora has struggled in the past against tall heavyweights. Chisora has suffered losses to Vitali Klitschko, Robert Helenius, Tyson Fury [x 2] and Kubrat Pulev. The height of those fighters was too much for the 6’2″ Chisora, who fights like a heavier version of Joe Frazier.

Povetkin and Hunter were likely never seriously considered as replacement opponents for Chisora because these are top tier heavyweights, and not the type Hearn can plug in to fight the aging 35-year-old Dereck on 3 weeks’ notice. Besides that, Hearn reportedly wants to schedule a fight between Povetkin and Hunter for the Anthony Joshua vs. Andy Ruiz Jr. rematch undercard on December 7 in Saudi Arabia.

Oscar Rivas had a bad experience in his last fight in the UK in losing a 12 round unanimous decision to Dillian Whyte on July 20 in London, England. After that match, it was learned that Whyte had allegedly tested positive for a banned substance but was given clearance to fight without Rivas being informed. It’s unclear whether Rivas would have wanted to come back to the UK after that experience to be the B-side against Chisora.

Price vs. Chisora not a main event level fight

Chisora (31-9, 22 KOs) had previously made a lot of noise at being designated as the second billing to the light welterweight unification fight between WBA champion Regis Prograis and IBF belt holder Josh Taylor. But with Chisora now fighting the 36-year-old Price (25-6, 20 KOs), he has nothing to argue about.

Simply put, Chisora-Price is unworthy of headliner status or even being the co-feature. It’s a mismatch just like Chisora’s last fight against former heavyweight world title challenger Artur Szpilka on July 20. Chisora obliterated the hapless Szpilka in a 2nd round knockout. That would seem like an impressive win for Dereck except for the fact that Szpilka had  already been knocked out by Adam Kownacki and Deontay Wilder not long ago

Some boxing fans don’t see Chisora vs. Price as being worthy of being on Sky Box Office. They point out that Price isn’t a top tier heavyweight, and he’s just another guy with a shaky chin that is being put in with Chisora. Recently, Chisora has been involved in mismatches against Senad Gashi and Szpilka.

Price fits in with those guys in terms of talent. He’s not a top tier talent unfortunately, but Chisora is too shaky to be put in with a good heavyweight. If the idea is to keep Chisora winning long enough for him to get a world title shot against Anthony Joshua or Andy Ruiz, then he can’t fight anyone good because he might lose.

“It didn’t matter who got in the ring with me on October 26 – I’m ready for WAR,” said to skysports.com. “David Price has stepped up and I’m ready for whatever he brings. If he thinks I’m just going to stand there and be a punching bag like Dave Allen, he is in for a shock. This is north versus south and in my hometown I write the rules. Saturday 26 October get ready to scream TIMBER!”

As of now, these are the undercard fights on the Prograis vs. Taylor card on October 26:


« Ryan Garcia To Face Romero Duno In Co-Main Event Of Canelo vs. Kovalev

Jerwin Ancajas vs. Jonathan Rodriguez on November 2 on ESPN »