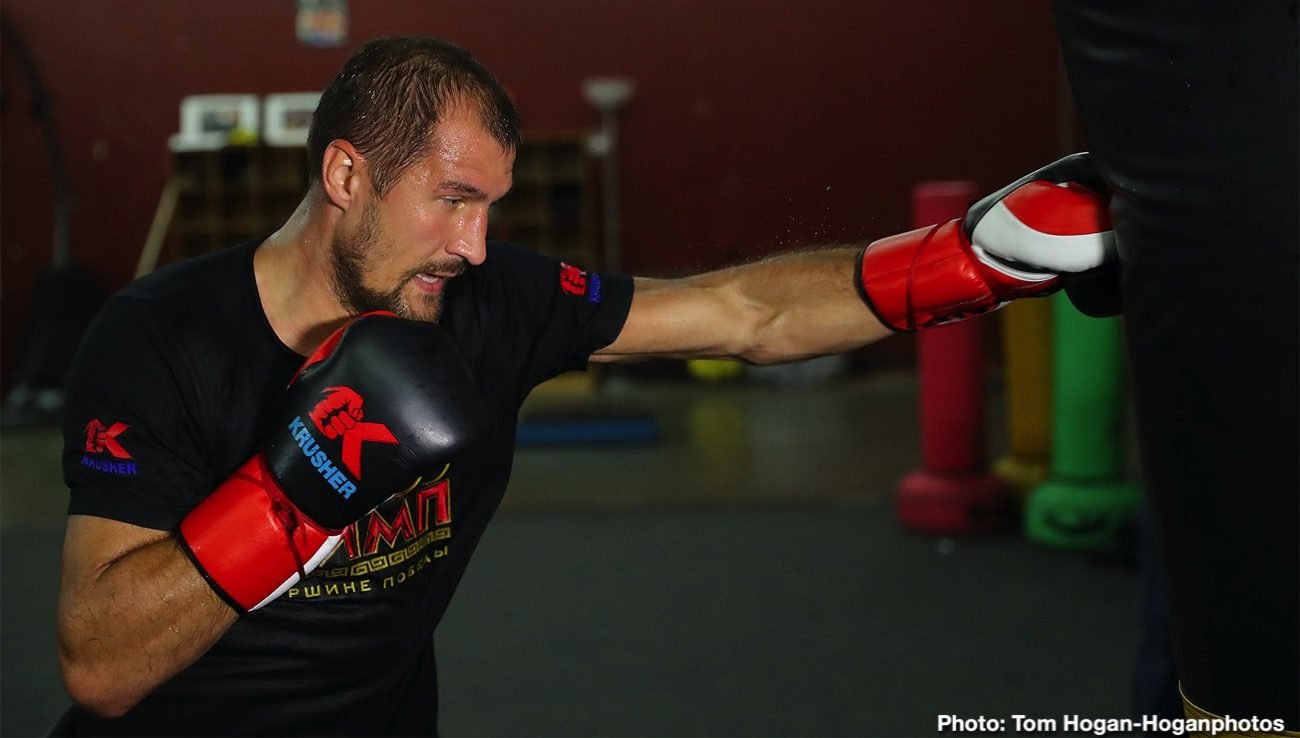 By Dan Ambrose: Golden Boy Promotions executive Bernard Hopkins says Saul Canelo Alvarez is taking a “dangerous” fight this Saturday in battling WBO light heavyweight champion Sergey Kovalev for his belt on DAZN in Las Vegas, Nevada. Surprisingly, Hopkins reveals that Canelo moving up to 175 is less a problem for him than the danger that the hard-hitting six foot Kovalev (34-3-1, 29 KOs) presents to him.

Canelo has obviously sparred with light heavyweights, and he knows already that he matches up with them well. The weight isn’t a big deal for Canelo because he’s already fighting in the mid-170s for his middleweight bouts. If anything, Kovalev might have a 10 pound weight advantage over Canelo on Saturday night. Canelo will likely be around 180 lbs for the fight, which is just a little heavier than what he normally weighs.

“You must make him do the opposite. You must NOT give him a break to take a step back to set up and work that jab, that stick,” said Hopkins to Yahoo Sports News. That stick must be put in his back pocket. So if you’re Canelo, to do that, you know you’re not as tall, so you’re moving at the waist and you make him pay when he misses and you don’t allow him to be at that pace he loves. You make him pay when he misses and he’s going to be conscious of that whenever he goes to throw any other punches.”

Hopkins wants the tank-like Canelo to do what his short, stocky body won’t allow him to do. Canelo CAN’T pressure Kovalev constantly because cardio is too poor. With his wrestler body, Canelo isn’t equipped with the cardio to fight at a faster pace than what he’s been doing. He’s been lucky lately in fighting Gennadiy Golovkin and Daniel Jacobs. Those guys didn’t go after him early to force him to gas. Kovalev is a different animal. He’s not going to fight like he’s walking on eggshells early on Saturday. He’s going to go after Canelo and try and take his head off.

In some ways, Hopkins’ advice for Canelo is similar to what Kovalev needs to do in order to beat him. You can’t give Canelo rest breaks because he rejuvenates his batteries when he’s allowed to take breathers. Canelo has poor stamina, and he ALWAYS fades in the second half of his fights. He also gasses out early in his fights when he’s forced to deal with fighters that attack him with combinations. So if anything, Hopkins’ advice applies more to Kovalev than Canelo, who can’t fight at a fast pace.

“He’d be right there in front of you, but he was making those movements and it was so hard to hit him,” said Hopkins about Mike Tyson. “That’s important for Canelo.”

It’s not a good comparison on Hopkins’ part in mentioning Canelo in the same breath as former heavyweight world champion Mike Tyson. Canelo isn’t the same kind of puncher as ‘Iron’ Mike Tyson, and he’s not as fast as he was. Tyson was dangerous on the inside. Despite being loaded with talent, Canelo isn’t a huge one-punch guy in close unless he’s facing Rocky Fielding or Amir Khan.

Canelo can knockout those types of low level opponents, but he’s not proven he an do it against quality fighters. If Canelo couldn’t knockout Daniel Jacobs or Gennadiy Golovkin, then he probably won’t be able to stop Kovalev. Hopkins needs to compare Canelo to someone else, and not Tyson. He’s not Tyson-eque. Canelo is more like a bigger version of Ricky Hatton, but without his gas tank, and willingness to mix it up.

NEWS:   Joe Smith Jr. ready for Canelo or Beterbiev after win over Geffrard

Will Kovalev take it easy on Canelo?

One thing we don’t know is if Kovalev will fight less aggressively against Canelo than he would normally. Canelo likes Kovalev, and the two are on friendly terms. The Golden Boy star PICKED Kovalev for this fight, and the Russian fighter is getting a career high payday. The question is will Kovalev feel beholden to Canelo for him giving the CASH OUT payday, and take it easy on him? You hate to say it but it’s possible Kovalev won’t be as aggressive as he normally is.

It’s got to be tough for Kovalev to work himself up mentally to where he wants to knockout a guy that is helping him out? Kovalev will be making MILLIONS for the Canelo fight on Saturday. That money is going to feather Kovalev’s nest in his retirement years. As such, will Kovalev has the same animal-like aggression to smash Canelo to smithereens like he’s done in the past with other opponents?

This writer has serious doubt whether Kovalev will fight hard enough to knockout Canelo. If Kovalev doesn’t do that, then his chances of willing are LOW to the extreme. The belief that many boxing fans have is no one beats Canelo by decision in Las Vegas. If goes to decision, there’s a good chance Canelo will have his hand raised as the winner. So, Kovalev’s best and perhaps only shot of winning is to knockout Canelo. But if Kovalev’s not going to fight with aggression, then he’ll surely lose.

Is Kovalev beholden to Canelo for giving him the payday?

There’s been fights in the past where popular stars have thrown a bone to guys that didn’t rate a big fight. And we’ve seen in some of those fights is guys that looked grateful to the popular fighter for giving them the shot. So instead of them fighting extremely hard, they sometimes looks like they’re neutral, not going after the star. Will we see this with Kovalev not going after the superstar Canelo?

If this were Artur Beterbiev that Canelo was facing this Saturday, there might be the concern about him not going all out. Beterbiev is an aggressive guy that fights in one gear, and that’s all out. He’s not someone that would take it easy on Canelo because he was given a fight against him.

With Kovalev, it might be a different story. He’s not on the same level as the highly talented IBF/WBC 175-lb champ Beterbiev (15-0, 15 KOs). Those two guys are going in a different direction. Beterbiev has never lost as a professional, and he wouldn’t hold back against Canelo. This writer has doubts whether Kovalev will find it in him to bite the hand that feeds by looking to smash up Canelo the way he needs to. Like I said, winning a decision against Canelo is doubtful.


« Gervonta Davis to Josh Taylor: “I will STOP you”