By Charles Brun: Eddie Hearn says his fighter Oleksandr Usyk has spotted weakness in WBC heavyweight champion Deontay Wilder, and thinks he can school him. Hearn states Usyk wants to fight Wilder, but he doubts the Alabama native would agree to face him unless it’s for the undisputed heavyweight championship.

Usyk was successful last weekend in winning his heavyweight debut against Chazz Witherspoon (38-4, 29 KOs) by a 7th round retirement at the Wintrust Arena in Chicago, Illinois. It was a performance by Usyk that viewed as an uneven one, considering he looked less than spectacular in defeating a 38-year-old fighter whose best days are well behind him.

Hearn is doing some name-dropping in bringing up Wilder’s name at every opportunity in connection with Usyk. It doesn’t make a lot of sense given that Usyk isn’t the mandatory for Wilder, and the odds of them facing each other anytime soon are slim at best. Wilder isn’t the guy that Usyk should be focusing on right now.

Usyk the mandatory for Joshua-Ruiz 2 winner

After just one fight at the heavyweight level, Usyk (17-0, 13 KOs) is poised to face the winner of the Anthony Joshua vs. Andy Ruiz Jr. rematch.  The World Boxing Organization gave Usyk a helping hand by making him their mandatory at heavyweight without him needing to fight anyone.

“I think it’ll be difficult to make any Usyk fight,” said Hearn to Fino Boxing. “He’s the mandatory challenger for the world WBO title. So, he gets the winner of Joshua-Ruiz. There will also be a mandatory with the IBF. So you’re going to get fragmented belts come up, and there’s no way that Wilder will fight Usyk unless he has a belt, and it may have to be an undisputed fight. You just wouldn’t pick Oleksandr Usyk [to defend against],” said Hearn.

Hearn hasn’t really given it a good try to match Usyk against anyone good yet, so it’s difficult to agree that he’s avoided. The original opponent for Usyk to fight was Tyrone Spong, and that was a disappointing choice  as well. But when Spong fell out after testing positive for a banned substance, it went from bad to worse with Hearn replacing him with Witherspoon instead of one of the top tier heavyweights. Hearn admitted that he wasn’t looking to match Usyk against a super tough fighter for his heavyweight debut, because he’s already the WBO mandatory challenger to Andy Ruiz Jr.

“He’s growing in terms of his commercial value and profile, but he’s very, very good, and he’s awkward,” said Hearn in talking about Usyk. “And he’s going to be very hard to look good against. I think he identifies Wilder as someone he would really like [to fight]. And I think as a technical boxer, every skillful boxer thinks they can beat Deontay Wilder, because he’s not that good, but he’s very dangerous.

“I’m not taking pot shots at him, but in terms of skills, he [Wilder] ain’t that good, but he’s very dangerous and he has that ability to win. That makes him dangerous. I think Usyk looks at Wilder and thinks, ‘I will school you.’ But it’s not that easy, especially with guys that punch as hard as they do,” said Hearn.

It does seem like Hearn is bitter, doesn’t it? Hearn saying that Wilder isn’t that good sounds like sour grapes on his part, because he’s failed repeatedly to setup fights with him against his Matchroom fighters Joshua and Dillian Whyte. Hearn could have made the fight with Wilder over a year ago if he’d given him a 50-50 purse split against Joshua. Instead, Hearn talked of giving Wilder a flat fee offer, and wasted his opportunity. After having fumbled at setting up a Joshua-Wilder fight, Hearn is saying that Wilder isn’t a good fighter.

Joshua-Ruiz 2 winner will be ordered to fight Usyk straightaway

“This is the only one, and then he’s going to fight for the world heavyweight title,” said Hearn about Usyk now set to fight the winner of the Joshua vs. Ruiz 2 rematch after beating Witherspoon in his heavyweight debut last Saturday. “He’s going to go out to Saudi Arabia, and watch Joshua-Ruiz.

“The winner of that fight will be ordered to fight him straightaway, and they will have to fight him or vacate or they’ll have to fight [Kubrat] Pulev. Again, it’ll be a situation where all of a sudden, you’ve got two mandatory’s [Pulev and Usyk], and you have to decide which deal is easier to make,” said Hearn.

It’s not likely to end well for Usyk in fighting the winner of the Joshua vs. Ruiz rematch. The way that Usyk looked last Saturday, he’s not going to beat either of these guys. Usyk doesn’t look as good as some of the smaller heavyweights that have come out of the cruiserweight division in the past.

Usyk is someone no one wants to fight says Hearn

“No one is going to fight Usyk,” said Hearn. Listen, even from my point of view, I’ll be honest, from an Anthony Joshua perspective, if I’m advising Anthony Joshua, to fight Pulev or Usyk, I’ll probably fight Pulev, straight up. But Joshua might look at it differently. He might want the challenge of fighting Oleksandr Usyk. But right now, all he’s thinking about is Andy Ruiz. So we’ll deal with that later. That’ll be a nice problem to have, but if Andy Ruiz wins, he’ll have the same problem. Usyk is in a brilliant position,” said Hearn.

It would help if Hearn tried to match Usyk against one of the talented fighters in the division before he started saying that no one wants to fight him. After Usyk’s performance against Witherspoon, it’s likely that no one at the heavyweight level would have any qualms about fighting him. He doesn’t look that good. Usyk brings none of what Evander Holyfield brought to the table when he moved up to heavyweight in the 1980s.  Usyk is more like a weaker version of Eddie Chambers. 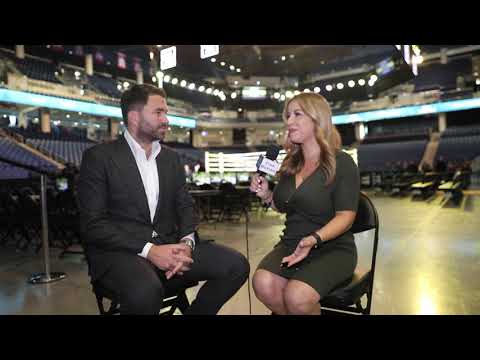