Haye thinks Usyk will be successful at heavyweight 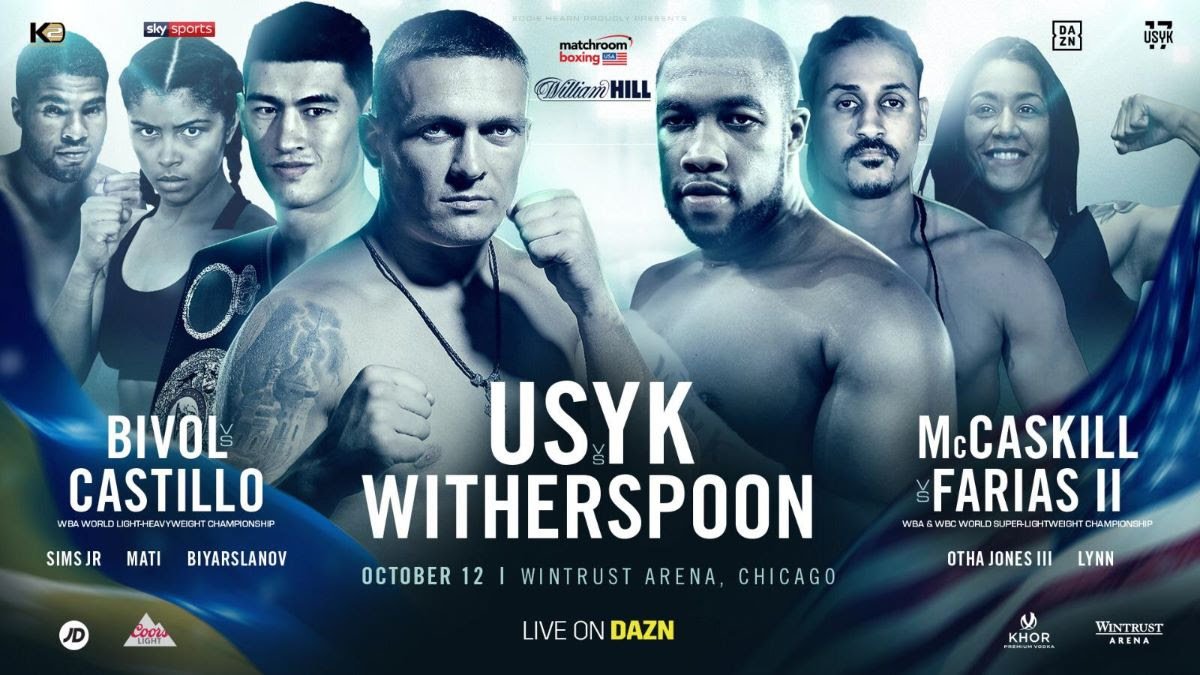 By Charles Brun: Oleksandr Usyk will be trying to make the transition from cruiserweight to heavyweight starting this Saturday night against Chazz Witherspoon at the Wintrust Arena in Chicago, Illinois. At 6’3″, 220, Usyk is on the small side to be fighting at heavyweight. Usyk-Witherspoon will be shown on DAZN and Sky Sports.

How Usyk performs against Witherspoon (38-3, 29 KOs) will gives fans an indication of whether he’s going to pan out at heavyweight. Usyk fought British heavyweight Joe Joyce six years ago in the World Series of Boxing, and he beat him by a three round decision. However, that was just a three-round fight, and it was back when Joyce weighed only 230 pounds.

Usyk got hit a lot by Joyce, and his face reddened after just three rounds. It looked like Joyce was getting to Usyk at the end of the fight. Usyk’s punching power wasn’t able to slow Joyce down for an instant. He kept coming forward and landing his harder shots to the head and body of Usyk. It’s possible that Usyk has gained more power since that fight, but if he hasn’t he’s going to be in trouble at heavyweight.

Usyk’s boxing skills will help him at heavyweight

There have been heavyweights in the past with less height and size than Usyk, but that was a different era, and most of them had a lot of power. The southpaw Usyk (16-0, 12 KOs) isn’t a big puncher, and he’s not young at 32. What Usyk does possess are good boxing skills. He moves better than the average heavyweight, and he’s got the southpaw stance that will help him. The late great Muhammad Ali wasn’t a huge puncher, but he could throw speedy combinations. He puts shots together really well. Usyk doesn’t throw combinations like Ali, and he’s not as willing to put himself in danger the way Ali did time and time again during his career.

Usyk’s defensive skills are a bit overrated. He’s not impossible to hit. If you compare Usyk to someone like former IBF/WBO heavyweight champion Chris Byrd, he’s nowhere near that good in terms of his defense. The southpaw Byrd (41-5-1, 22 KOs) was almost impossible to hit cleanly in his youth. Usyk isn’t as good as Byrd was on defense.

Usyk is like a slower, more hittable version of Chris Byrd. Like Byrd, Usyk isn’t a big puncher. If Usyk is going to be successful at heavyweight, he’ll need to out-box the giant heavyweights like Anthony Joshua, Deontay Wilder and Tyson Fury. Those are the guys that have good boxing skills, and it’s not going to be easy for Usyk to beat those guys by a decision. The heavyweights that Usyk matches up with in terms of height are Alexander Povetkin,  Dillian Whyte and Joseph Parker. However, those guys punch a lot harder than Usyk, and they throw more meaningful shots. Usyk is still fighting his amateur style of tapping with jabs and light power shots. He’s not going to be able to beat those types of heavyweights if he doesn’t develop more power as he goes along.

“I’ve always thought he has a great chance because he’s so skillful,” said Haye to skysports.com about his assessment of Usyk’s chances at heavyweight. “This will be enough to beat 90 percent of heavyweights but whether he can do it against someone who is 6’6” remains to be seen.

“It looks like he can. he is not a one-punch specialist, he throws clusters of punches. He is a southpaw so is tricky to hit clean. He punches from different angles,” said Haye.