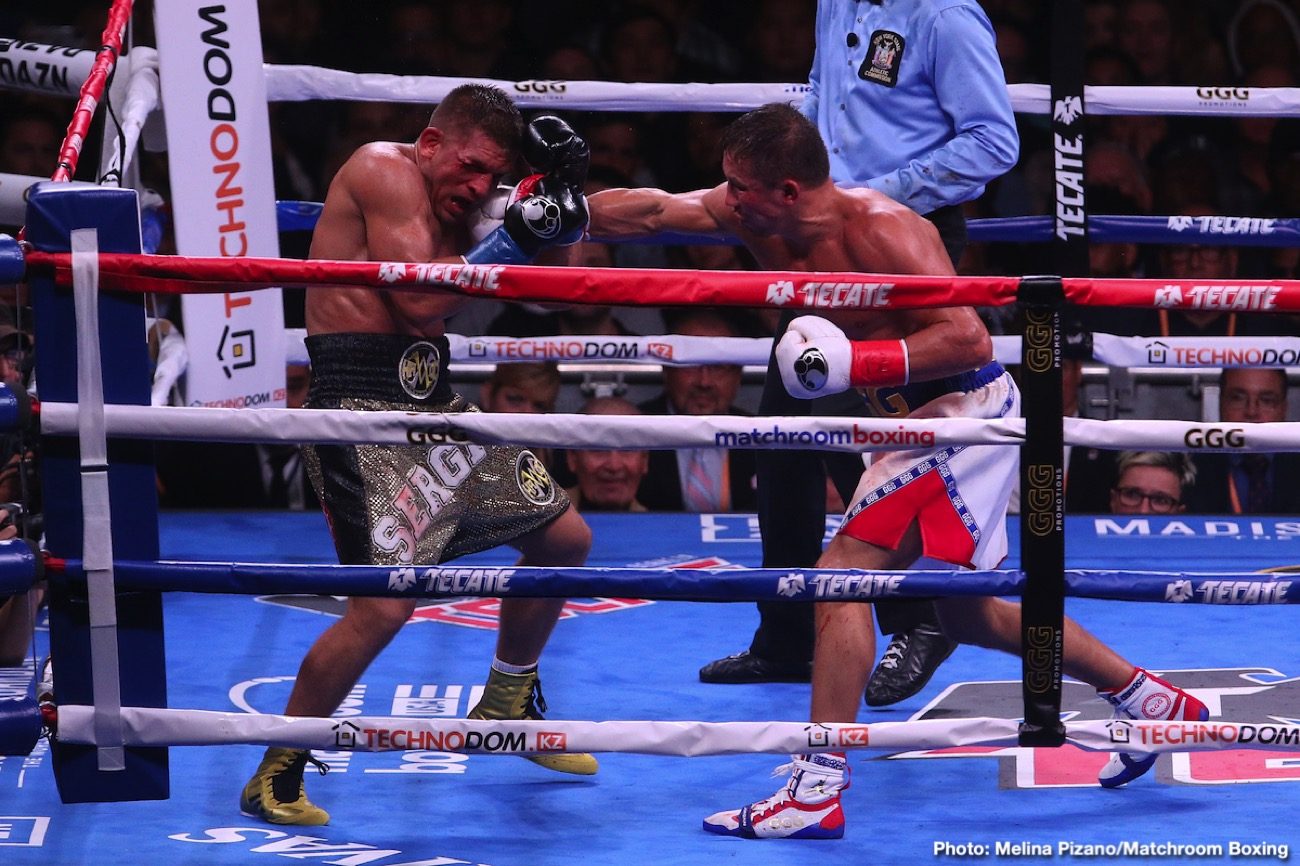 By Sean Jones:  Eddie Hearn says Gennadiy Golovkin could be fighting next on February 29 against his IBF mandatory challenger Kamil Szeremeta at the Wintrust Arena in Chicago, Illinois. This is the same venue that former unified cruiserweight champion Oleksandr Usyk made his heavyweight debut last Saturday night against Chazz Witherspoon.

Golovkin’s promoter Hearn likes the idea of having him fight Szeremeta in Chicago, because there’s a large Polish community there. Szeremeta is from Poland, and Hearn feels that they would show up to watch him fight challenge Golovkin for his newly won IBF title.

“I just think that Gennadiy has a good reputation with fight fans in the city,” said Hearn last Saturday night. “So if he [GGG] fights his mandatory, which is the Polish fighter Kamil Szeremeta, 20-0, then it would make sense to come here [Chicago, Illinois] with such a huge Polish community.

“It’s not something that’s definite, but it’s something we’re looking at. Just because we may have to,” said Hearn when asked why he’s thinking of matching GGG against his mandatory Szeremeta before the International Boxing Federation has ordered the fight.

“When you win a vacant title, it’s very likely they will call a mandatory. They haven’t yet, but we’re in discussions with them [IBF]. But being a vacant title, we know that Szeremeta is pushing for it,” said Hearn.

Hearn says it’s likely that the International Boxing Federation will order Golovkin (40-1-1, 35 KOs) to defend his IBF middleweight title against mandatory challenger Szeremeta (20-0, 5 KOs) in his next fight. When a fighter wins a vacant world title, the sanctioning body for that belt generally orders the new champion to defend the title against their mandatory in their first defense.

Golovkin will face Szeremeta if ordered by IBF

There are obviously ways around that if a promoter wishes to, but Hearn isn’t showing interest in having GGG delay his mandatory defense against the 29-year-old Polish fighter Szeremeta. In theory, Hearn could give Szeremeta a step aside fee so that Golovkin could temporarily fight another opponent.

The other route would be for Golovkin to fight a unification match against either WBC middleweight champion Jermall Charlo or WBO Demetrius Andrade. There doesn’t appear to be any interest right now on Golovkin or Hearn’s part in fighting either of those guys.

Golovkin worked hard to win the vacant IBF middleweight title in beating Sergiy Derevyanchenko, and he’s not going to want to willingly give it up. Gennadiy was stripped of his IBF title last year when he failed to defend it against Derevyanchenko, and he doesn’t to lose it again if ordered by the IBF to defend against the capable Szeremeta.

“Gennadiy wants to fight Canelo, but I don’t think he’s going to wait for a decision from Canelo,” said Hearn. “It all depends on what happens in the next few weeks. Obviously, Kovalev [vs. Canelo] fight is only 3 weeks away. But it’s not like he can wait until then. I don’t think he’s prepared to wait until December for a decision for another fight. If the IBF says the mandatory is due, which generally happens with a vacant belt, then he’ll jump in and take that fight,” said Hearn.

Some boxing fans think Golovkin is choosing to face Szeremeta rather than someone more talented in order to avoid losing. Gennadiy had a tough time winning his last fight against Sergiy Derevyanchenko on October 5, and a lot of fans thought GGG lost that fight. Golovkin won by a 12 round decision, but he knew he’d been in a fight. Derevyanchenko, 33, attacked Golovkin to the body, and backed him frequently during the contest. Golovkin was hurt by a body shot in round 5, and looked close to being stopped.

Szeremeta not a great opponent for Gennadiy

Golovkin vs. Szeremeta probably won’t interest a lot of boxing fans, because many of them will have never heard of the Polish fighter. Hearn had Szeremeta fighting on the undercard of Golovkin’s fight with Derevyanchenko, and he obviously was already in the planning stages for GGG to defend against him in his first defense.

If Golovkin does face Szeremeta next, then his first three fights of his six-fight contract with DAZN will have been against these guys:

Some would argue that DAZN isn’t getting much value for the money that they’re giving Golovkin with the huge contract that they gave. They obviously would have liked to have seen Golovkin face Canelo by now in the third fight, but it’s not in his control. Other interesting fights Golovkin could have taken in place of those fighters would be Charlo, Jarrett Hurd, David Benavidez and Callum Smith.

One can’t blame Golovkin, 37, for not taking any risky fights at this point. He’s waiting on the trilogy match against Canelo Alvarez, and he’s not going to take a big risk against someone good at this point. There’s too much money in the third fight with Canelo for Golovkin to risk taking on someone like Demetrius Andrade, Callum Smith, Billy Joe Saunders or Charlo. Hearn does want Golovkin to face Callum, Andrade or Saunders in 2020, but only after he faces Canelo.

🇵🇱 Gennady Golovkin vs Kamil Szeremeta could take place in Chicago if the IBF order it to happen next, according to Eddie Hearn. They have a hold on the Wintrust Arena for February 29th – there is a big Polish population in the city who would support the challenger.