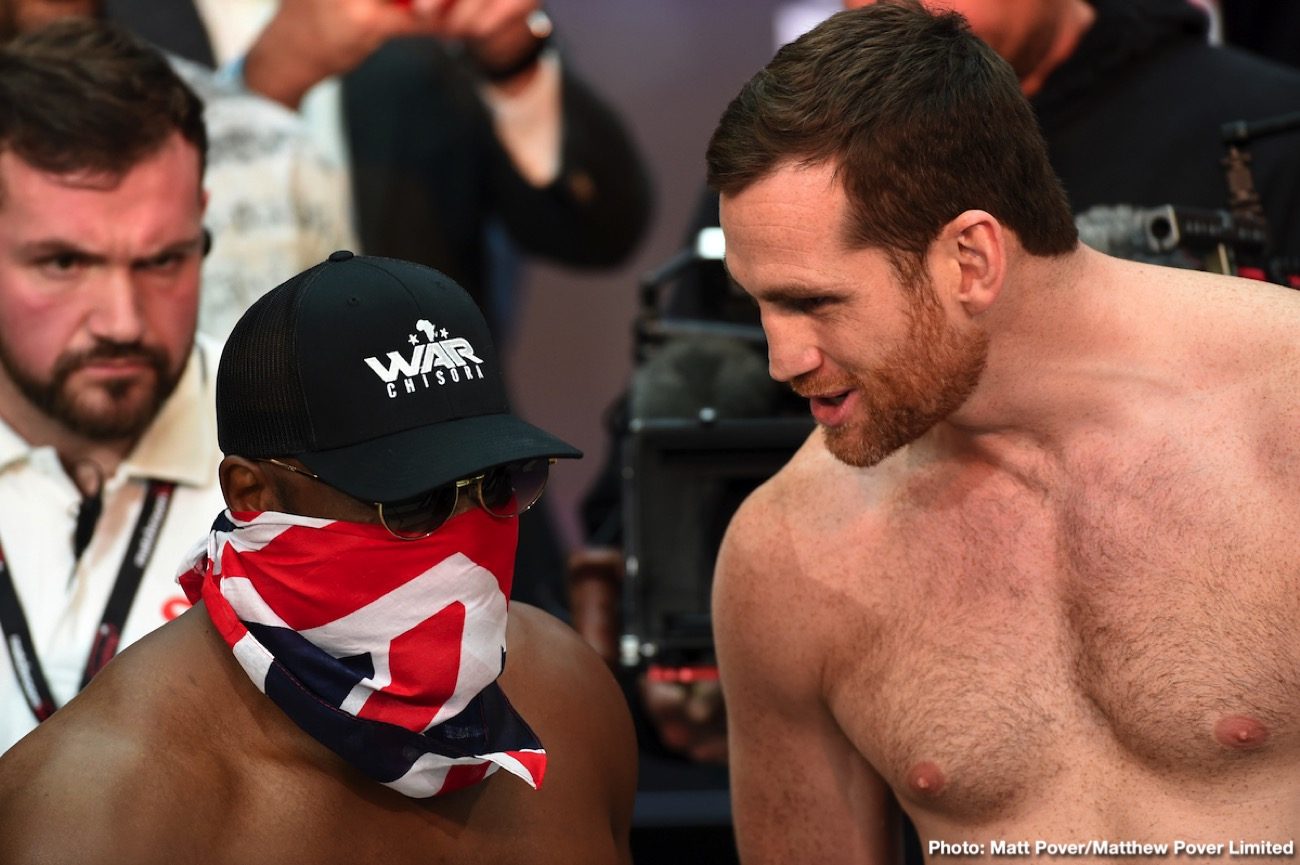 By Charles Brun: Heavyweight David Price (25-6, 20 KOs) weighed in at 264¼ pounds on Friday for his fight against former world title challenger Derek Chisora (31-9, 22 KOs) this Saturday at the O2 Arena in London, England. The 6’8″ Price towered over the 6’2″ Chisora during their face off. The size of Price could be an advantage for him if he’s able to withstand Chisora’s big looping shots that he likes to throw.

Chisora and Price like each other. A few years back, Chisora helped give Price confidence to continue his career by telling him not to retire when things were going bad for him. Although Chisora says it’ll be “business” between them on Saturday night, it was impossible to ignore the friendliness between them. That might be one of the reasons why Chisora wore sunglasses during the weigh-in. His eyes would betray him to the fans.

Chisora weighed in at 260¼ lbs, and appears to be in the best shape he’s ever been in. His midsection looks considerably thinner than in his recent fights against Artur Szpilka, Senad Gashi and Dillian Whyte. There’s a lot on the line for the 35-year-old Chisora in this fight.

Not only are there a lot of boxing fans that will be watching the contest on Sky Box Office, but a victory for Chisora could lead to a match against Oleksandr Usyk. That’s a fight that Chisora wants, as it’s a winnable one for him. Usyk can’t punch at the heavyweight level, and he’s the World Boxing Organization mandatory challenger. If Chisora beats Usyk, then he’ll be getting a world title shot.

Price says he hypnotized Chisora during face off

“No chance of that happening,” Price told Sky Sports when asked if Chisora intimidated him. “I’m just nice and calm and relaxed really. I’ve just said to him then, even though I couldn’t see [through] his sunglasses, I’ve looked into his eyes, I can hypnotize him. I have been taking lessons on how to hypnotize.

“Told him he’s going to be as weak as a kitten tomorrow. He said ‘it’s the only chance you’ll have’, but you know what, I’m looking forward to it.’ This is what it’s all about, testing myself against top, top heavyweights and this is going to be a great fight,” said Price.

If Price can stay relaxed and keep Chisora at the end of his punches, he has a shot at winning the fight. Price looked great in his last fight in beating Dave Allen by a 10th round stoppage last July. The 6’2″ Allen was unable to work his way to the inside against the much bigger Price, who moved well, and landed big uppercuts. Price turned back the clock on his career in fighting like he used to earlier in his career. Chisora will have a lot of problems against Price if he’s able to fight with that form.

Price is usually a ball of nerves during his face offs with his opponents, but today he was completely relaxed. He obviously knows Chisora quite well, and doesn’t view him as someone that h needs to be worried about. However, when the two get inside, Price will have plenty to worry about. Price hasn’t faced a puncher like Chisora since his fight against former WBA heavyweight champion Alexander Povetkin last year in March.

Povetkin dropped Price twice in the fight in stopping him in the 5th round. Price’s stamina was the biggest culprit him losing to Povetkin, considering that he had nothing left in the gas tank after 4 rounds. It wasn’t that Povetkin was devastatingly good. Price was completely gassed going into the 5th. Almost any heavyweight would have knocked Price out with him in the state that he was in.