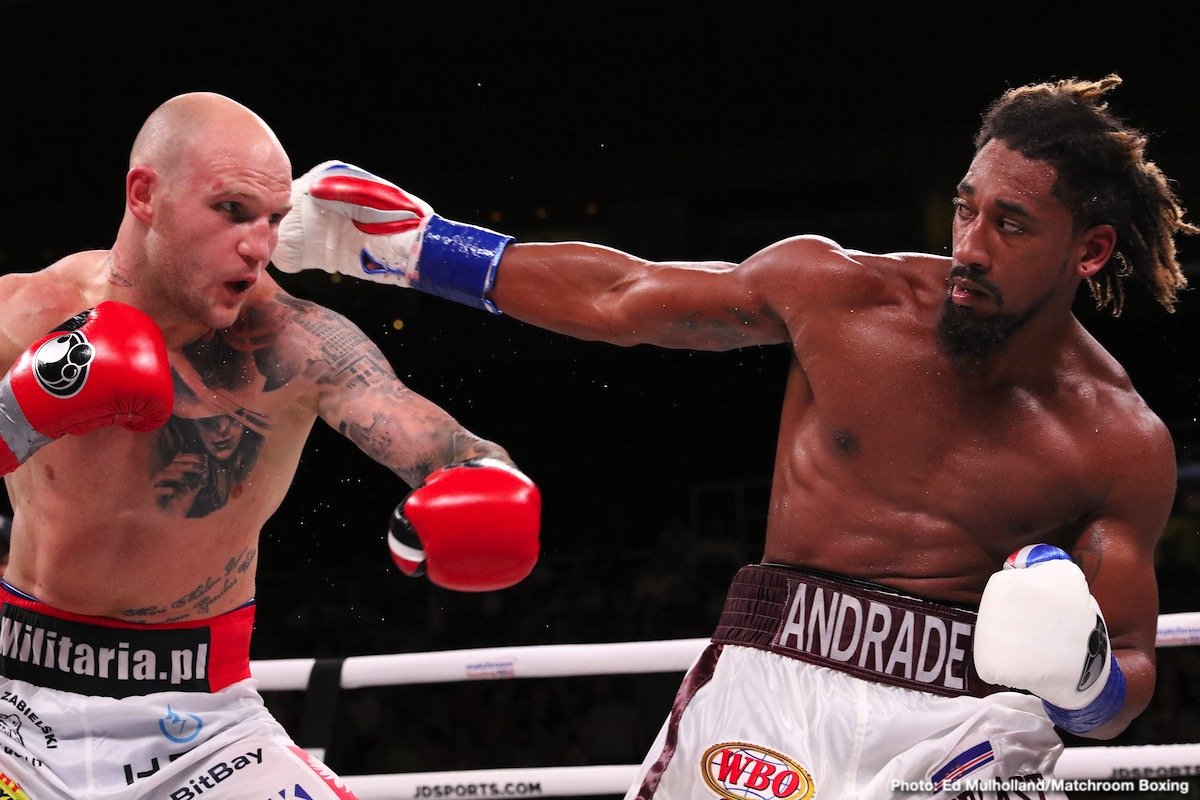 By Dean Berman: Steven Butler (28-0-1, 24 KOs) has decided to accept an offer to challenge WBA ‘regular’ middleweight champion Ryota Murata instead of facing WBO champ Demetrius Andrade in December, according to ESPN.

Matchroom Boxing promoter Eddie Hearn was looking to put together a fight between Andrade (28-0, 17 KOs) and #1 WBO Butler for December 13 or 21 on a Golden Boy card. However, Butler instead is taking the bigger offer to travel to Japan to face WBA secondary middleweight champion Murata (15-2, 12 KOs).

It’ll be interesting to see who Hearn can find to match Andrade against in December on DAZN. Hearn is trying to increase Andrade’ popularity by having fight often, and call out the top guys Gennady Golovkin and Saul Canelo Alvarez. With the type of opposition Andrade is facing, he’s got his work cut out for him.

Andrade even entered the ring to call out GGG last Saturday after his win over Sergiy Derevyanchenko at Madison Square Garden in New York. Andrade didn’t get much attention from Golovkin or the media. He might as well have been invisible. Golovkin was too beaten up from his grueling fight with Derevyanchenko to take much notice of Andrade.

There are a lot of options in the WBO’s rankings for Andrade to fight, but of them are little known fighters.

Murata, 33, is the more winnable fight for the heavy-handed Canadian Butler than the crafty Andrade, who would make it difficult for him to land his shots. With Butler’s youth and power, he would be a big problem potentially against Andrade as well. The 6’1″ Andrade ran out of gas in the second of his last fight against Maciej Sulecki last June.

Butler has a 10-fight winning streak since losing to Brandon Cook by a 7th round knockout in January 2017. He’s improved a lot since he took that fight at age 22, and he’s more mature and ready to capture a world title against Murata.

It’s understandable why Butler would want to face the 2008 Olympic gold medalist Murata. It’s a good style match-up for Butler. He won’t have to pursue Murata all around the ring like he would with Andrade.

In Murata’s last fight, he avenged his loss to Rob Brant (25-2, 17 KOs) in stopping him in the 2nd round on July 12 in their rematch in Osaka, Japan. Murata had the perfect game plan in using his size, and power to go after Brant with an all out assault from round one. Brant thought he could stand in front of Murata, and beat him with volume punching like he’d done in their first fight last year in October 2018.

That was a fight in which Brant threw an incredible 1262 punches and connected on 356. Brant isn’t the biggest puncher, but with him landing 356 shots, he beat up Murata. For his part, Murata connected on 180 of 774 shots.

In the rematch, Murata looked bulked up, and he used his size and power to stop Brant. Had Brant used movement, he could have foiled Murata’s game plan. For some reason, Brant never made any adjustments in the fight.

Ryan Garcia To Face Romero Duno In Co-Main Event Of Canelo vs. Kovalev »