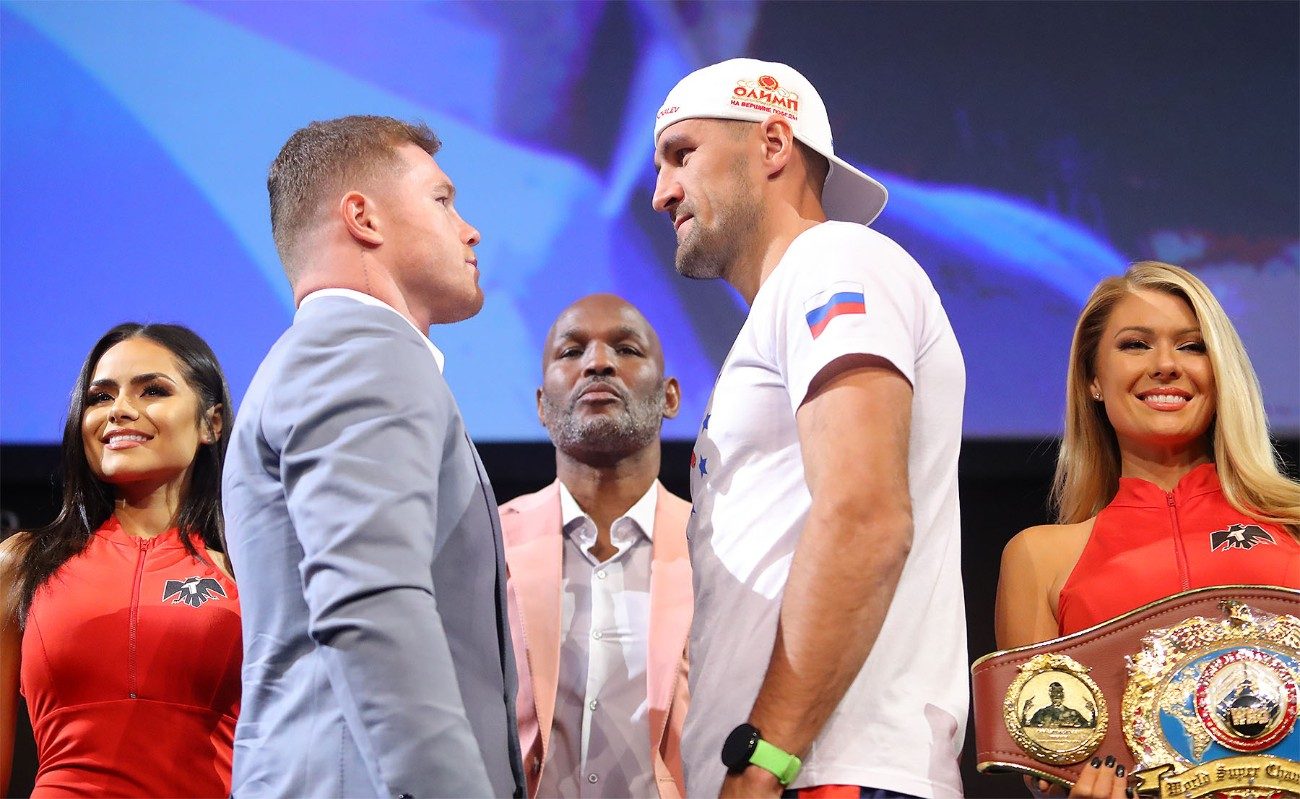 Canelo Alvarez (52-1-2, 35 KOs) and Sergey “Krusher” Kovalev (34-3-1, 29 KOs) hosted their final press conference today ahead of their 12-round fight for Kovalev’s WBO Light Heavyweight World Title. The event will take place on Saturday, Nov. 2, 2019 at the MGM Grand Garden Arena in Las Vegas and will be streamed live exclusively on DAZN.

Below is what the fighters and their teams had to say at today’s final press conference:

“I’m sure this fight is going to be very interesting and very difficult for both of us because we never step back, never give up. I have to thank all my team, all of team Golden Boy and Canelo, and also thank you to all the people who are involved in this fight. Thanks to Las Vegas, thanks to MGM Grand for a nice stay and for everything. Thanks to all my boxing fans, let’s make a fight this Saturday.”

Were you offended that Canelo chose you, perhaps seeing you as an easy win? “No, I’m happy. It’s nice that this is the biggest call in my boxing career, and to face Canelo, I’m happy. This is a big test for me – to prove one more time, I’m the best light heavyweight in the division.”

Will you be the first to KO Canelo? “You know, let’s fight, and in the fight you’ll get to see. It’s not my goal, because when you follow that goal, you can’t do it. I just want to get into the ring and box very well and make a great fight for boxing fans and the boxing world.”

“We’re two great champions, and right now, we respect each other inside and outside the ring. But we will do our job very well for the boxing fans. And we will be fighting, never step back, never give up, we will make a great fight 100%.”

“Everything is teamwork, everybody puts in a little bit to make this happen, so thank you to everyone for this. And I want to give thanks to the great fighter Kovalev for accepting this fight. This allowed history to be made, and because of him accepting this fight, Saul will be winning his fourth division title. Thank you to the people that participated in the sparring for this great fight, it was different, and it contributed a lot for us to be prepared for this.”

“A very special thanks to Saul, we have been together for 14 years, and we’ve come a long way and we are here in a very special moment. And this Saturday, Saul will have his cake with four candles – each candle for each division that he has won a title. On Saturday, expect Saul to be on the list of the immortals of this sport.”

“I’m so proud to represent one of the best fighters in boxing, Sergey Kovalev. But I’m more proud to be involved in this historical fight, which all the fans want. I can’t talk much about what it means to win for Canelo, because he’s already a legendary fighter. He’s already top of the line. Sergey has bounced up and down, but I can tell you one thing – if Sergey can win this fight, which I believe he will, he will become the most recognized and the best fighter in the history of Russia. Let’s hope we’re going to have a good time, both guys are going to stay safe, and enjoy Saturday night’s fight.”

“It’s going to be a great show Saturday. Most importantly, I have to thank Mr. Alvarez for making this fight happen. So much respect. I think you’re one of the best out there, and it’s going to be a great night of boxing on Saturday. I’m happy that 20 years from now, I can say I was a part of that. Everybody be ready, Sergey has some tricks up his sleeves, I know Alvarez does. Mr. Reynoso has done a great job with him since the Mayweather fight, he’s improved a whole lot, but you’ll see what we’ve been doing Saturday night.

“This is a very important battle for Canelo and Sergey Kovalev and there’s a lot at stake for both fighters. When we first started working with Canelo over a decade ago, we knew he was destined to be great. I think we are all aware now that we are witnessing greatness in the making. What does it mean to be great? To be considered great at anything, a person must be above average, they must exceed what’s normal.

“We say some fighters are good, others are bad, but we reserve the term for those who are considerably above average, and through their various accomplishments they’re able to achieve that status. Few fighters in the history of boxing can be considered great, and this small group of people develops a fierce ambition and spirit of competition. This ambition comes natural to them. For me that’s what motivated me to spend of my teenage years putting aside the amusements of youth for the responsibility of greatness.”

“At the same time every natural gift must be cultivated by competition. You need to test your talents with other people who also have that same ambition. But what happens when those equal strengths and sizes are no longer competitive? Then the task becomes looking for even bigger challenges and I think that’s what makes a fighter great – the ambition to succeed, the spirit to compete, and the initiative to keep looking for that next challenge.

De La Hoya: Kovalev is one of the most avoided fighters

“Kovalev is a three-time world champion. Kovalev is one of the most avoided fighters in his own division. With Kovalev’s strength and power, he can end the fight at any moment.”

“This is what it looks like when you have the initiative to keep looking for that next challenge. And then, only then, is the competition no longer against the man in front of you. It’s now between you and history. For those wanting to witness history from the comfort of their homes, the fight will be streamed live on DAZN. We want to thank DAZN for giving us the best platform in boxing.”

“First, thanks everyone for supporting the fights that matter. For Canelo, I commend you again and respect you not only as a fighter, but as a man and not only as a champion, but as a business. I have super profound respect for Canelo because I have a history of taking on the best, and I see in the legacy that he’s building that Canelo has the same spirit. I know that he’s in the right mindset based on fighting the best in that division – none other than The Krusher.

“Thanks for bringing fights like this that make boxing a conversation in homes, coffee shops, bars, number houses in Philadelphia, as a conversation like other big sports whether it’s a playoff in the NBA, whether it’s NFL, golf, boxing is being talked about. And to see that, to me, Golden Boy, my partner Oscar De La Hoya, Eric, Robert, they are all on the same page and taking action to make these fights happen.”

“I must continue to tell you your job is not to be biased, or to be with us all the time, but to write what you see and write what’s being done. And that’s more important than what you’ve heard. And not being the first one to get it out, because at the end of the day, you do your own independent analysis. ‘

“Enjoy the fight November 2 because I know Canelo will have his hands full and Sergey Kovalev is going to be ready. I’m very happy and very satisfied that boxing has been passed down, like you pass a baton, to these two great fighters, making it even greater.”

“I also want to thank the fighters, because without them, without guys who want to take risks, we don’t get to have great events like this one. The first time I ever watched Sergey Kovalev fight a round, I knew he was something special. I want to thank him today for proving me right about that. I also want to thank Canelo Alvarez for calling Sergey out because that took a lot of courage and that’s what it takes to be a great fighter, and we know he has it.”

About the Matryoshka doll she surprised Sergey with that artistically documented some of his career-defining moments: “The one thing all those fights had in common, is that they happened in the other fighter’s hometown. Sergey won them all, he drew strength from the crowd that was booing him, and he plans to make that happen again on Saturday.”

“MGM Grand is thrilled to host this highly-anticipated matchup between two great champions – Canelo Alvarez and Sergey Kovalev, Saturday evening, as they make their return to Las Vegas. This will certainly be an exciting night as Canelo moves up in weight. We look forward to seeing you Saturday night for this great event.”

“We are certainly honored and privileged to regulate these fights and we are prepared to go to work. Most importantly, we would like to thank the fighters and recognize them. Because of the fighters, they keep boxing exciting, alive, and continue to make history.”

“I would like to thank all the journalists who have traveled to Las Vegas for this week’s fight. Since our launch last September, you’ve kept us on our toes, challenged us to always do better but more importantly, you’ve been willing to keep an open dialogue with a new entrant into this storied sport. Since our launch last year, we’ve assembled the best schedule in boxing – something you’ve seen us market as Fight Season on DAZN, akin to the consistency that fans expect from the NFL and NBA. It’s a true season of fight sports to close out 2019.”

“Week on week, month on month, more subscribers are being treated to great events with interesting narratives – and no fight embodies that description better than Canelo vs. Kovalev. This is a hugely important week for the sport of boxing, a hugely important night for DAZN, and our biggest fight we’ve put on to date in the United States.”

“It’s one thing for a fighter to jump up two weight classes but it’s a different kettle of fish to jump up two weight classes and challenge the biggest name in the division. Canelo as we all know is not your typical fighter. His drive to continually seek out new challenges is truly admirable. In a little more than 10 months, Canelo has already fought three times on DAZN. He is the biggest draw in boxing, we couldn’t ask for a better partner.”