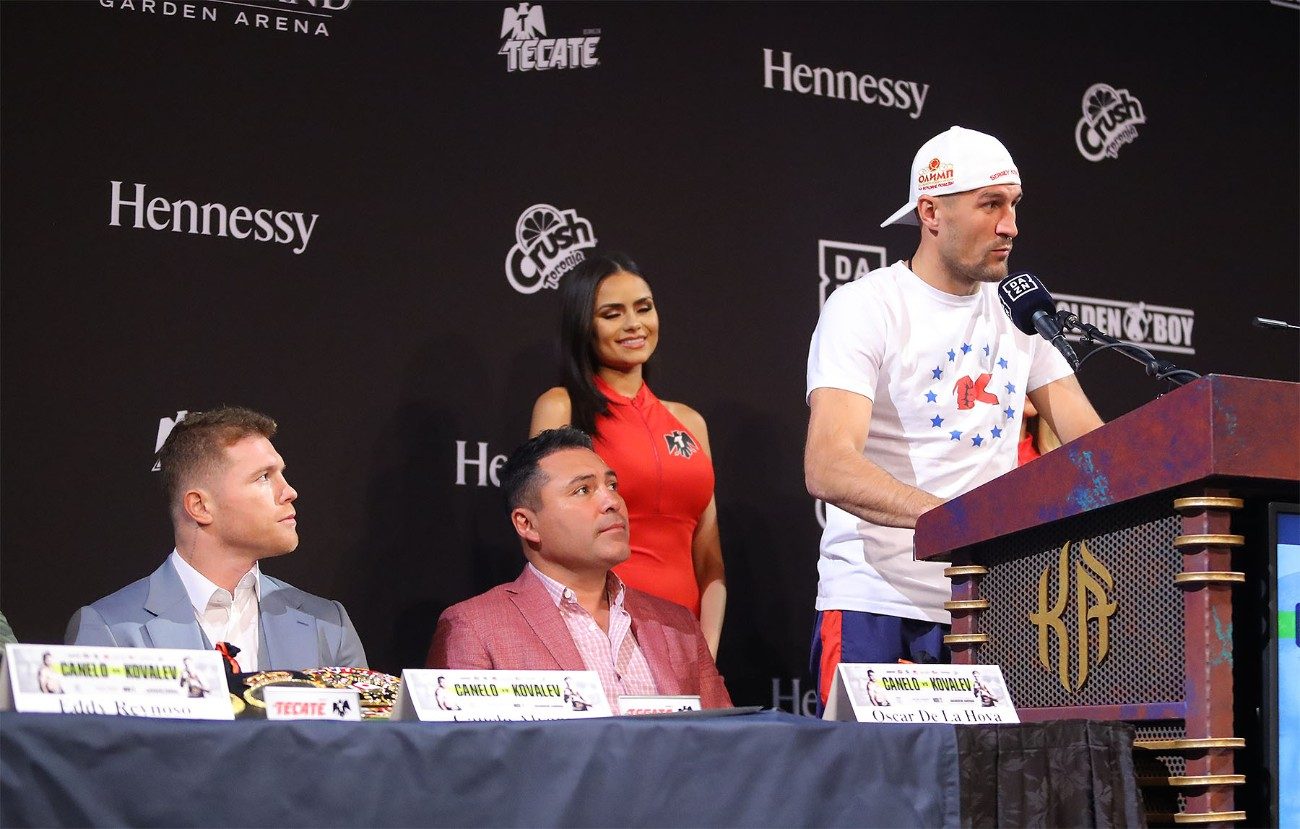 By Barry Holbrook: Trainer Buddy McGirt gave away the game plan that WBO light heavyweight champion Sergey ‘Krusher’ Kovalev plans on using against challenger Saul Canelo Alvarez this Saturday night by saying that they’re NOT going to focus on landing head-shots. McGirt says Canelo (52-1-2, 35 KOs) is too elusive to try and hit him to the head.

So instead of doing that, Kovalev will be targeting Canelo’s wide torso on Saturday night at the MGM Grand Garden Arena in Las Vegas, Nevada.  Sparring partner Denis Douglin confirms that’s what the game plan will be, as he said that Kovalev was hitting him on his arms and shoulders during their sparring sessions. Douglin initially thought was a waste of time for Kovalev to be doing that. But after three rounds of Kovalev hitting him on the arms, he couldn’t move them to throw punches.

“We’re not aiming for his head,” said Kovalev’s trainer McGirt to Fighthype in giving a hint of the game plan for Saturday. “You name it, he’s getting hit there. We’re going to hit him everywhere but the bottom of his feet.

“We’re going to mug his a–. We’re not going to try and hit him to the head. We know he’s elusive. But he can’t move all this,” McGirt said in pointing to the torso of the interviewer. “We’re going to bang that for five or six rounds.”

McGirt’s comments about Kovalev hitting Canelo on the torso for five or six rounds is what sparring partner Douglin said. He was getting nailed by shots from Kovalev in the shoulders, and gave him problems. However, Douglin said he was still able to land his own shots, but he said Kovalev got the better of him.

It makes a lot of sense for Kovalev to ignore Canelo’s head because he’s too hard to hit cleanly due to his movement. He moves his head and upper body better than most fighters. In the 70s, there were a lot of fighters that did that, and the pros back then focused on throwing to the body and it worked.

Guys that move their head a lot like Canelo are effective against fighters that are unable to adapt. Gennadiy Golovkin couldn’t adapt. He kept targeting Canelo’s head in his two fights against him, and he wasn’t effective. Floyd Mayweather Jr. adapted immediately in his fight with Canelo by hitting him with jabs to the body.

Kovalev will do the OPPOSITE of Canelo

“The key is this: to do the opposite of whatever he does,” said McGirt. “No, we keep him on the outside. If he wants to try and out-box, then we keep him on his heels. If he wants to keep coming forward, then we’ll turn him like he’s on a merry-go-round. I don’t believe a tall guy should fight tall. You’re a big target. Why would a guy stand up like the Statue of Liberty?

“You’re a bigger target. And if a guy punches at you, there’s only one way you can go, and that’s backwards. You’ve got to be able to get under those punches. I don’t care how tall you are. If Joshua was able to get under the shots Ruiz was throwing, he’d still be heavyweight champion of the world. He wasn’t able to get away from them, because he was standing up like the Statue of Liberty,” said McGirt.

It sounds like a good idea what McGirt is saying about Kovalev doing the opposite of what Canelo is doing, but it also doesn’t make sense. If Canelo chooses to stay on the outside, Kovalev would need to fight on the inside if he were to follow McGirt’s instructions of doing the opposite of him.