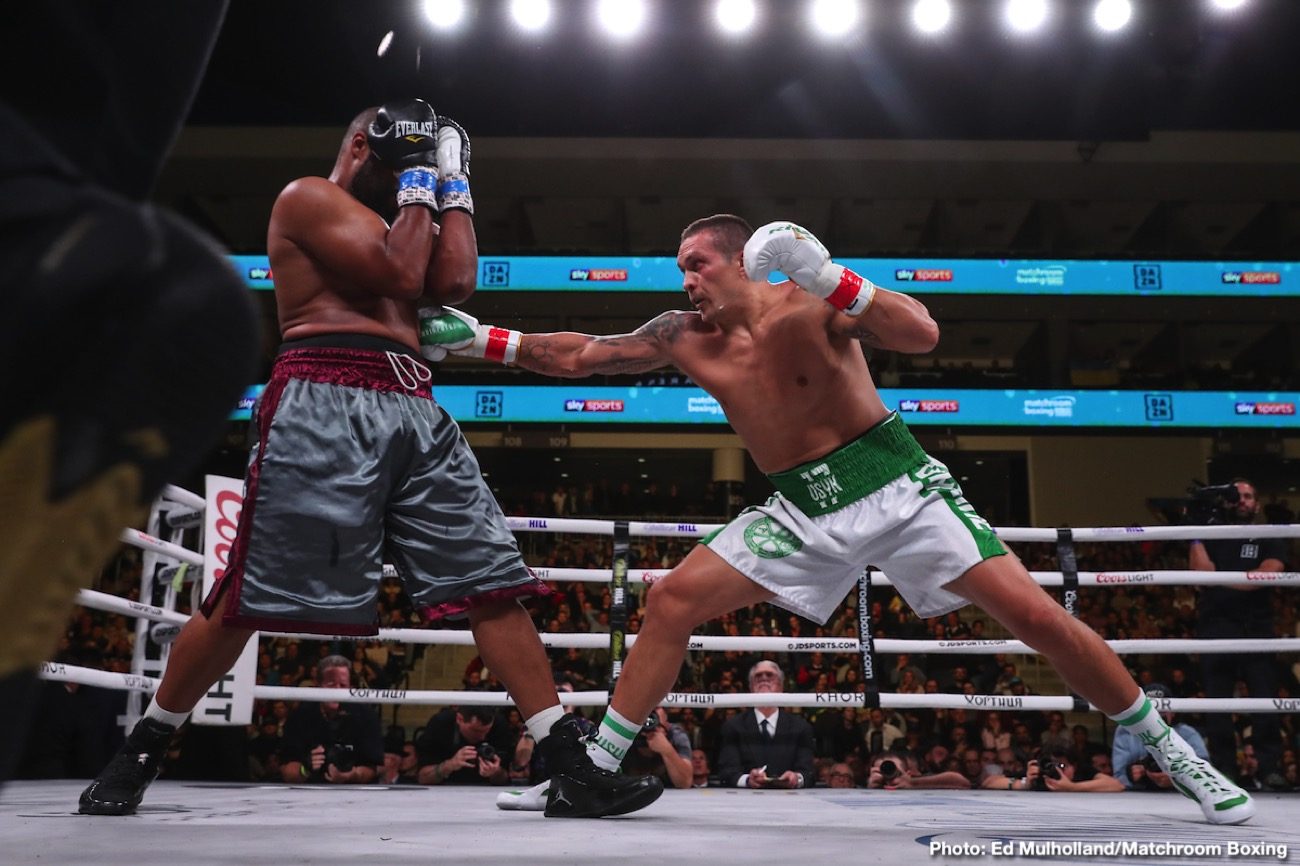 By Barry Holbrook: Oleksandr Usyk won his heavyweight debut on Saturday night in beating Chazz Witherspoon by a 7th round stoppage without hurting him. Usyk (17-0, 13 KOs) turned up the heat on Witherspoon (38-4, 29 KOs) in the 6th and 7th rounds to wear him out and help persuade his corner to stop the fight at the Wintrust Arena in Chicago, Illinois.

After the fight, Usyk made it known that he’s ready to fight for a world title.

Usyk tried knocking Witherspoon out in the traditional way, but he didn’t have enough power on his shots to drop him. So instead, Usyk threw a lot of punches that led to Witherspoon collapsing onto his stool in a heap after round 7. The fight was stopped at that point when Witherspoon decided he’d had enough.

It was a good performance by Usyk in showing a different way to win at heavyweight that most of the top fighters have shown.

”I did what my trainer told me to do. I just follow their orders and that was to box. And I did box, but if I had the opportunity, I would take that opportunity,” Usyk said after the fight.

Witherspoon, 38, was too slow to land much more than an occasional right hand, and jab. Most of the time when Witherspoon did connect with one of his ponderous right hands, it was when Usyk was attacking him aggressively without care.

Usyk is hoping to use his win over Witherspoon as  springboard to challenge for the IBF/WBA/WBO heavyweight titles against the Andy Ruiz Jr. If Usyk’s promoter Eddie Hearn is wise, he’ll have him fight at least one more tune-up level fight before he matches him against the winner of the Joshua-Ruiz Jr. rematch.

Usyk has been criticized by some boxing fans due to him being named the WBO mandatory after just one fight at heavyweight. He didn’t have to work for the spot the way normal fighters do. The spot was given to Usyk based on him having held the WBO cruiserweight title.

Witherspoon wasn’t enough of a test to prepare Usyk for what he’ll need to be dealing with when he fights for a world title.

Usyk was supposed to fight Carlos Takam for his heavyweight debut, but that failed to happen. He was then scheduled to fight Tyrone Spong, but that fight too fell apart after he tested positive for a banned substance.