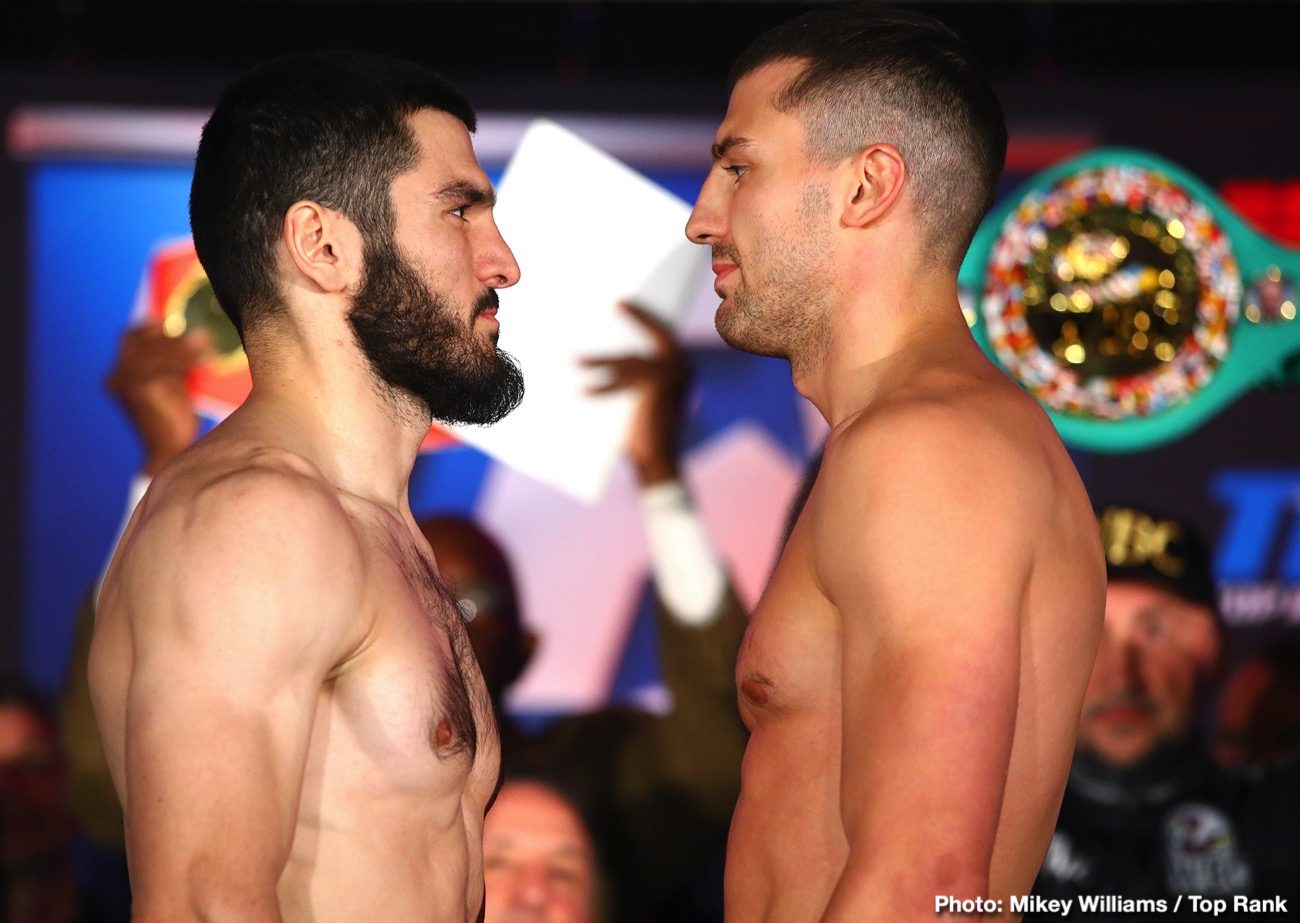 By Kenneth Friedman: WBC light heavyweight champion Oleksandr Gvozdyk and IBF champ Artur Beterbiev meet tonight in a unification bout at the Liacouras Center in Philadelphia. This is a fight that fans have had a difficult time picking a sure fire winner.

While some fans like the brute power of Beterbiev (14-0, 14 KOs) with his perfect knockout record, other fans are more impressed with the technical boxing skills of Gvozdyk (17-0, 14 KOs). Just tonight’s fight will play out is the big question. Both guys are so used to dominating their opposition that makes it hard to accurately pick a win in this match.

Gvozdyk, 32, is a slight favorite going into the match, but that doesn’t matter. It’s basically an even fight with the odds-makers. Being a favorite over Beterbiev is meaningless because he’s been knocking everyone out. The judges are assuming that he won’t knockout Gvozdyk too, since he’s upgrade over the opposition he’s been facing.

Gvozdyk’s best wins have come against Adonis Stevenson, Isaac Chilemba, Yunieski Gonzalez and Doudou Ngumbu. Stevenson was old at 41, coming off of a hard fight against Badou Jack, and a shell of his former self. Gvozdyk was still losing to him going into the 11th. Chilemba fought Gvozdyk with a broken hand, which eventually led to the fight being halted in the 8th round.

Given the injury to Chilemba and the age for Stevenson, it’s impossible to give Gvozdyk full credit for those victories. Yeah, he beat Stevenson and Chilemba, but he didn’t bet the best version of either of those guys. As for the rest of the fighters that Gvozdyk has beaten during his career, they weren’t quality guys.

“First of all, my dream is to become undisputed champion,” said Gvozdyk. “This is the first step, and this is the necessary step. And the second thing is, this is what fans like to see. They don’t want to see champions fight some opponents or journeymen. Tough fights, which fans like to see. For me, it’s a big challenge.”

Earlier on Friday, Beterbiev, 34, weighed in at 183.5 lbs. and Gvozdyk 184.2 lbs for their second day weigh-in. This was a Pennsylvania-mandated second-day weigh-in for the morning of the fight. The two fighters could only go as high as 185 pounds.

The magic question is whether Saul Canelo Alvarez will choose to fight the Beterbiev vs. Gvozdyk winner if he beats WBO light heavyweight champion Sergey Kovalev on November 2. There will be a lot of pressure on Canelo to face the winner of the Beterbiev-Gvozdyk fight if he beats Kovalev. If Kovalev looks old and shot against Canelo, it’s going to cause boxing fans to push him to take on Beterbie or Gvozdyk. There’s also WBA light heavyweight champion Dmitry Bivol that the fans wants Canelo to fight. There will be a lot of interest in a Canelo vs. Bivol fight.

Less than an hour until we’re live from Philly!