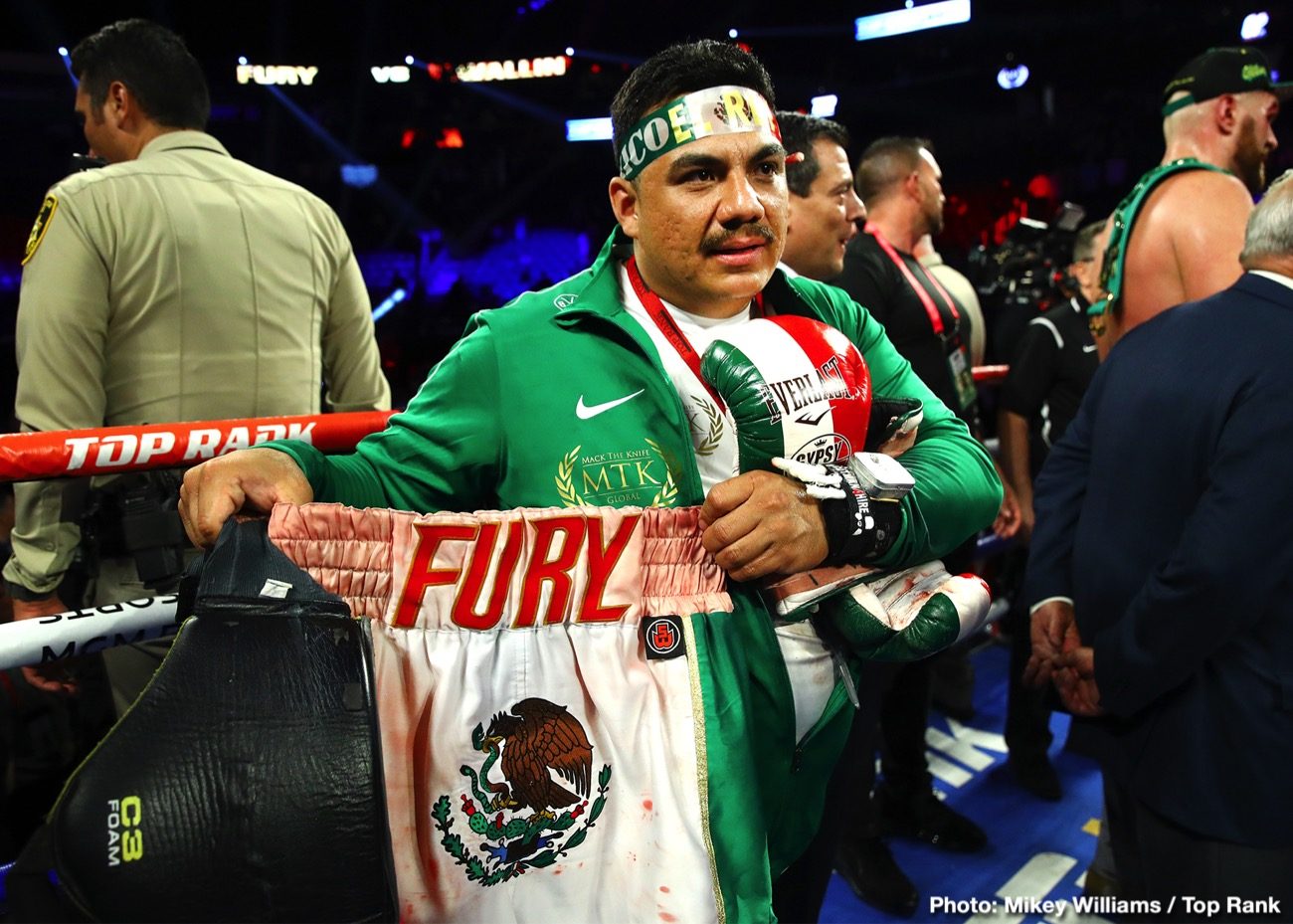 By Charles Brun: Tyson Fury’s cutman Jorge Capetillo was an integral part in him winning his fight last Saturday night against Otto Wallin (20-1, 13 KOs) at the T-Mobile Arena in Las Vegas, Nevada. After Fury suffered a potentially fight-ending cut over his right eye, Capetillo kept him in the bout by applying huge globs of Vaseline on the eye.

With millions of dollars at stake, Capetillo worked like a surgeon in Fury’s corner, caking the Vaseline on his monstrous cut with expert precision. It’s interesting to note that referee Tony Weeks didn’t stop the action to order Capetillo to remove the mountain-sized globs of Vaseline from Fury’s injured right eye. Normally, fighters aren’t allowed to fight with tons of Vaseline on their injured eyes. In this case, Fury was able to get away with this. Was it because of his popularity? Who knows. As the saying goes, ‘It’s good to be the King.’

Fury had a lot to lose if the fight were halted

This was a tune-up fight for Fury to get him ready for a massive payday against WBC heavyweight champion Deontay Wilder on February 22. Fury was supposed to have an easy time against the 28-year-old Wallin. It wasn’t supposed to be a competitive fight. Wallin surprised Fury coming out quickly in the first two rounds, and nailing him with straight lefts.

Capetillo says Fury gave him a bonus the next day when he came to his house to check on him. His work in Fury’s corner was perhaps even more important than his trainer Ben Davison. Without Capetillo, the fight would have been stopped. Since the cut was caused by a punch from Wallin, Fury would have lost by a knockout.

He did the best he could in keeping the wound clean so that blood wouldn’t drop into his right eye. However, even with Capetillo working on the eye constantly, blood was leaking nonstop during the rounds. It’s a minor miracle that the ringside allowed the fight to continue without stopping it. After the fight, Fury needed an incredible 47 stitches to close the cut. 20 stitches is considered a good amount, but over 40 is huge amount.

Capetillo: Fury’s cut was the worst he’d ever seen

“It was so deep man. First I added it to the skin. What I wanted to do is hide it a little bit more so the doctors don’t see it, because it was wide. It was long,” said Tyson Fury’s cut man Jorge Capetillo to TMZ in talking about his terrible cut over his right eye. “To make sure that when he gets punched, the Vaseline goes in.

I wanted to put a lot of Vaseline so that the blood doesn’t come out into the eye. And, I knew they could stop it. I knew the possibility of the referee could stop the fight. So I knew that I had to keep it clean, because if the cut is kept clean, and doesn’t drip blood too much, I know they were going to allow him to go round by round.

I know Fury was winning round by round, and I know about his capacity. So it was a matter of keeping it clean. The doctor and the ref were looking at it okay so we could go. Yeah, to be honest, bro,” said Capetillo when asked if this is the worst cut he’s ever seen. “That’s the worst.

If this really was the worst cut that Capetillo had ever seen, it makes you wonder why the ringside doctor didn’t stop the fight. Many boxing fans believe that the fight wasn’t stopped because Fury is with ESPN, and he had a big money rematch with Wilder scheduled for next February.

Captetillo: Fury took care of me with a bonus

“Yeah, in the locker room, he came to me and hugged me really hard, and said he loves me, and thanked me for my effort, for my work to stop the bleeding so he could continue fighting,” said Capetillo. “He showed me a lot of love.’

“Yeah, he gave me a bonus, that’s for sure,” said Capetillo. “I saw him on Sunday morning at his house. I went to say hi, and see how he’s doing. He was so grateful, and happy. He’s a great human being. Yeah, he took care of me with a little bonus,” said Capetillo about Fury.