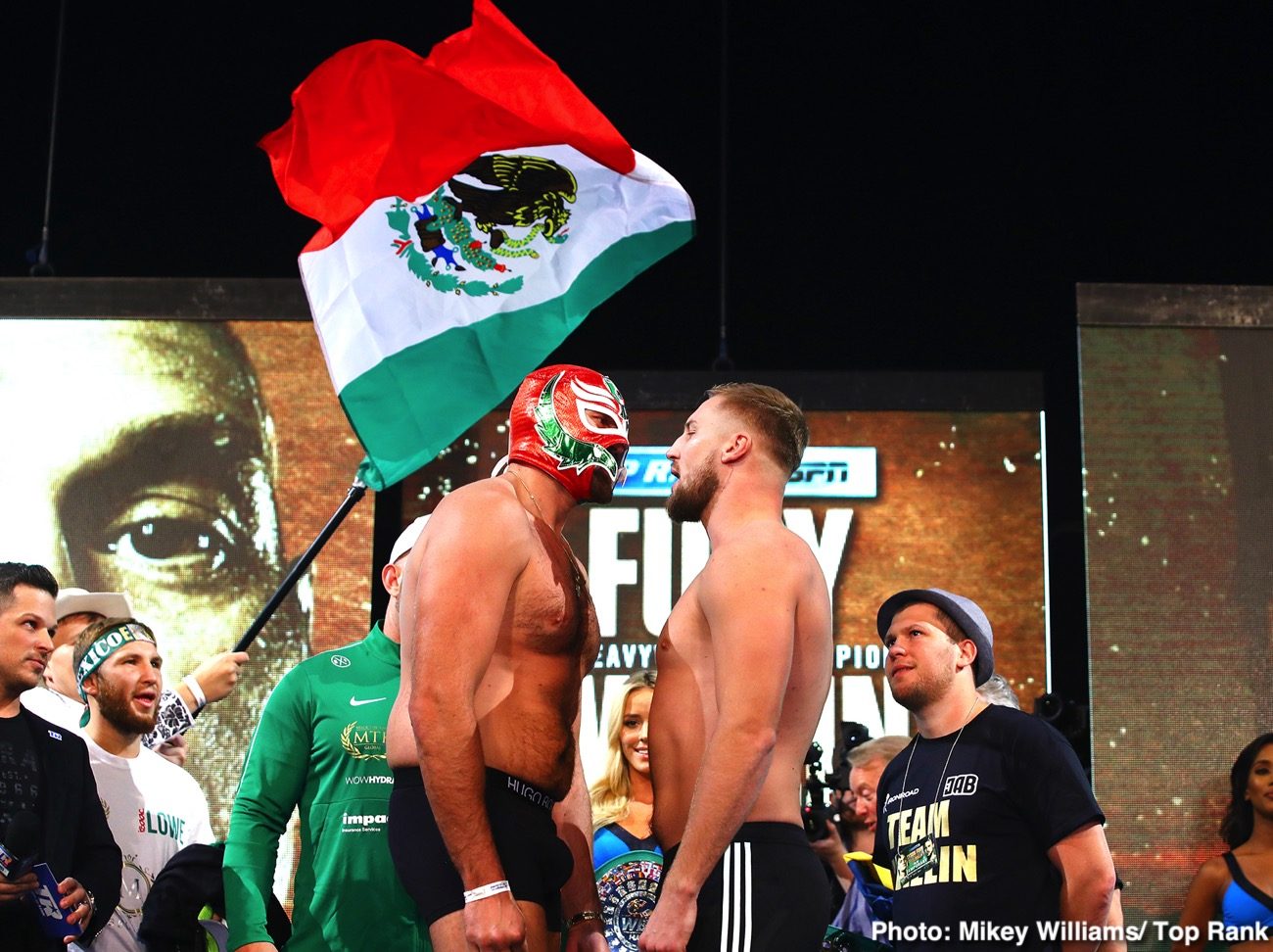 By Aragon Garcia: Lineal heavyweight champion Tyson Fury weighed in at 254.4 pounds on Friday for his 12 round fight on ESPN+ against undefeated Swedish heavyweight Otto Wallin for their fight at the T-Mobile Arena in Las Vegas, Nevada. The action starts at 11:00 ET on ESPN+ this Saturday night.

Wallin weighed 236 pounds, and looked to be in the better shape of the two fighters.  Fury will never be body beautiful. He has too many stubborn pounds that will stick to midsection no matter how much effort he puts in to try and lose the weight.

Fury wore a wrestling mask during the weigh-in, and still looked soft around the middle despite his claims of having lost weight.

Fury has lost nine pounds from the 263 lbs. he weighed for his last fight against Tom Schwarz, but he’s heavier than he was for his fight last December against WBC heavyweight champion Deontay Wilder. Fury, 31, weighed 256 pounds for that fight.

For Fury to be completely trimmed, he likely would need to get down to 230 lbs. If Fury were to trim off the flab around his midsection, his true weight would be around 230. He’s still carrying an extra 25 pounds of fat around his sides that can’t be counted as functional weight. It won’t matter that Fury is still flabby against a non-threat like Wallin, but when he face Deontay Wilder next February, it’s going to matter.

“He’s not fighting in December, unless he’s fighting with his wife,” said Top Rank promote Arum in shutting down talk of Fury coming back to fight in December. “We expect within a year there will be 20 million homes in the United States that get ESPN+ either on the stand alone or part of the package [ESPN+, Disney+ and Hula]. “Because it gives entertainment for the entire family from the kid shows to Disney.

Nobody puts out product like Disney. Plus, they have the whole Fox library. It’s the greatest bargain for everybody in the family. Hula has great programming. You get everything for less than HBO, and less than Netflix. It;s a tremendous opportunity for people to buy the streaming service to see stuff that’s better than anything else that’s offered. You enhance your visibility if you’re packaged with entertainment. You do well if you’re just sports. ESPN has been number 1 in Disney’s empire,” said Arum.

Arum’s prediction of 20 million subscribers to ESPN+ by 2020 is highly doubtful. He believes that with the bundled deal being offered of Disney+, ESPN+ and Hula, boxing fans will subscribe in huge numbers. The package is reportedly $12.99 per month, which sounds like a great deal for boxing fans wanting to provide entertainment for their whole family. Ultimately, for ESPN+ to hit the 20 million mark that Arum is predicting, Top Rank is going to need to put on better fights. That means matching Fury against good fighters rather than guys like Wallin and Tom Schwarz.

Other weights on the card for Saturday