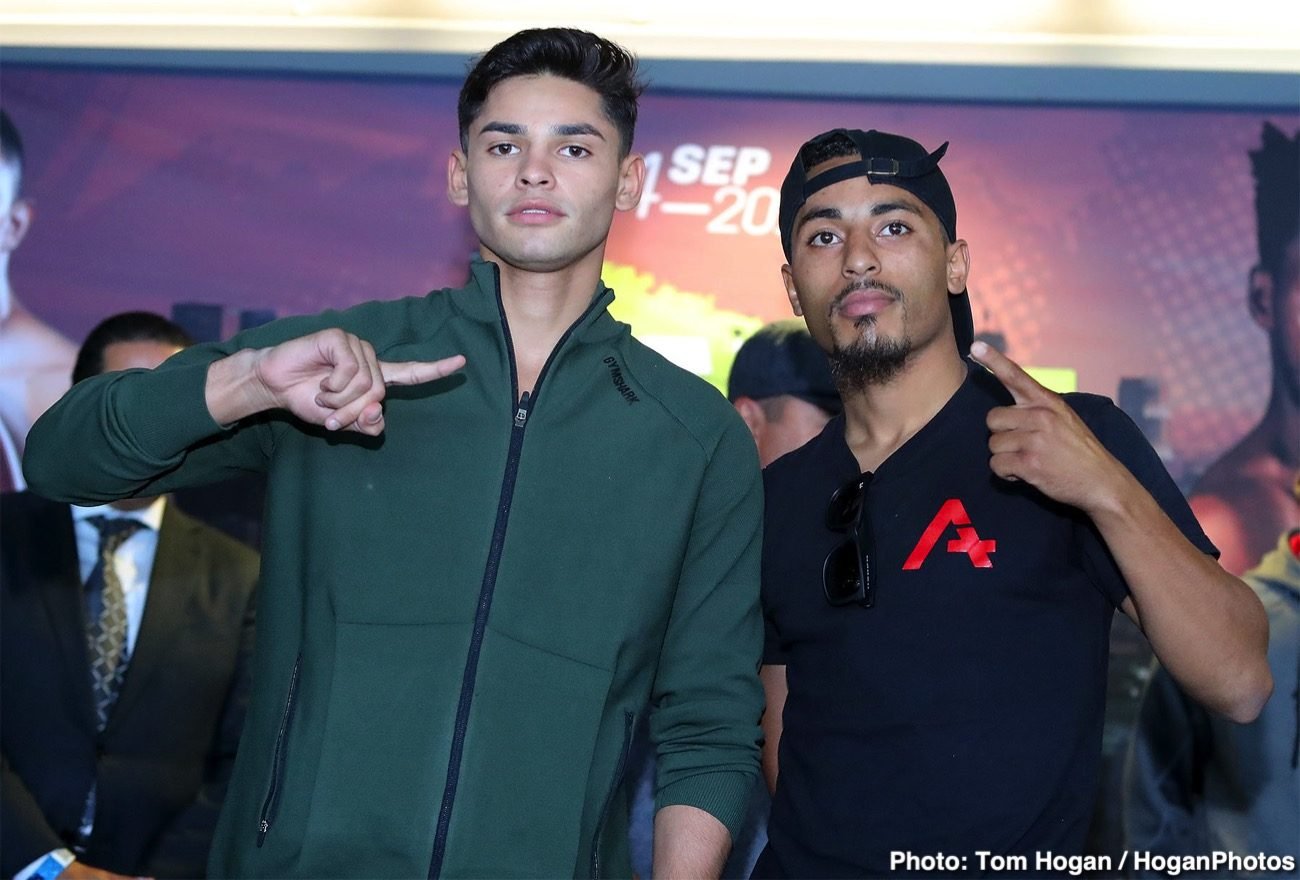 By Dan Ambrose: Lightweight contender Ryan Garcia won’t be fighting this Saturday night as his opponent Avery Sparrow has reportedly been arrested, and he won’t be able to face him on DAZN. Not surprisingly, there isn’t a replacement for the 20-year-old Garcia (18-0, 15 KOs) with just one day’s notice, so he’s off the card.

According to Mike Coppinger, the U.S Marshals had been looking for the Sparrow (10-1, 3 KOs) in gyms in hopes of arresting him. Garcia vs. Sparrow was supposed to be the co-feature bout on the Jaime Munguia vs. Patrick Allotey card on DAZN this Saturday night.

Ryan Garcia was asking about Sparrow at weigh-in

Garcia had no idea where Sparrow was during the weigh-in on Friday. Ryan weighed in at 135, and immediately asked, “I just want to know where he’s at? He talked a lot, and he’s not here. He told me he makes 126 easily. I don’t know where he’s at. I wanted this fight. So somebody call him. Somebody ring him up. Let’s fight. Let’s get this on,” It wasn’t until later that Garcia found out that Sparrow was off the card.

It was known since Wednesday that U.S. Marshalls were combing through gyms in Los Angeles to capture Sparrow. Was a matter of time https://t.co/D51ZmjZAgI

Ryan Garcia will now be fighting next on November 2 against Romero Duno (20-1, 15 KOs) on the undercard of Saul Canelo Alvarez vs. Sergey Kovalev. Duno is fighting this Saturday on the Jaime Munguia vs. Patrick Allotey card against Ivan Delgado (13-2-2, 6 KOs) in a 10 round fight on DAZN at the Dignity Health Sports Park, in Carson, California.

Duno is an excellent fighter. Ryan needed Sparrow to get him ready for the Duno fight, and now he’s not going to have the little step up. It’s going to be a big bump up in quality when Garcia shares the ring with Duno in less than two months from now on November 2. It’ll be up to Golden Boy Promotions for them to decide whether Ryan is ready for Duno or not. It’s not a good thing for Garcia that his fight with Sparrow fell through because he needed this fight to show whether he can handle the talent of an aggressive guy like Duno.

It would be risky for Golden Boy Promotions to find a replacement for Ryan to fight at the last moment, because he’s not a big puncher. If he were to someone with an aggressive style that he’s not ready for, he could get taken out. While some boxing fans compare Ryan to the Golden Boy Oscar De La Hoya for early in his career, he’s nothing like him. Oscar was a dominating knockout threat in the lighter weights before moving up to 147. Garcia is more of a finesse type of fighter, and he lacks the size, power and talent that De La Hoya had when he was young.


« Canelo Alvarez vs. Sergey Kovalev to fight at 175-lb limit, with NO catchweight