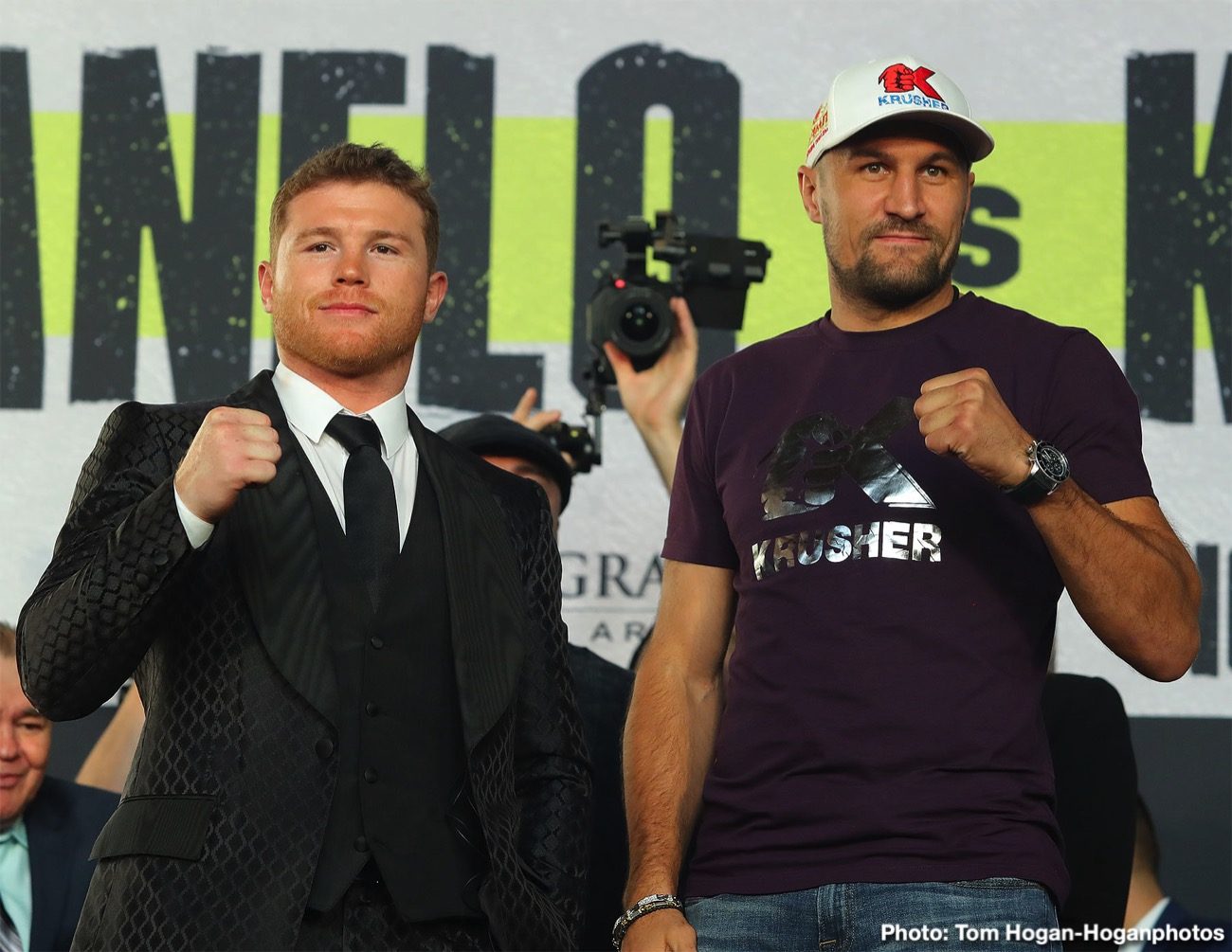 By Robert Addams: Superstar Saul Canelo Alvarez is daring to be great by moving up in weight 2 divisions to take on WBO light heavyweight champion Sergey Kovalev on November 2. De La Hoya is concerned with the powerful jab that Kovalev possesses, a well as his 16-pound weight advantage that he’ll have over 29-year-old Canelo (52-1-2, 35 KOs). De La Hoya is worried about Kovalev’s power jab after watching him dispatch his last opponent Anthony Yarde in the 11th round in August 24.

With a power jab like the one Kovalev possesses, he could KO Canelo without ever being hit by any of his legendary body shots. Kovalev owns the best jab in the light heavyweight division. It might be the best in the entire sport.

Canelo will be facing Kovalev on November 2 on DAZN at the MGM Grand Garden Arena in Las Vegas, Nevada. This is a chance for Canelo to win a fourth division world title. For Kovalev, he’ll be getting a career high payday rumored to be close to $12 million.

De La Hoya likes Canelo’s chances of scoring a knockout if Kovalev remains stationary throughout the fight. If Kovalev doesn’t move, it will give Canelo an opportunity to close the distance, and hit him to the body. As most boxing fans know, Kovalev (34-3-1, 29 KOs) in taking shots to the body, and that’s Canelo’s specialty. He’s a classic body puncher, but he doesn’t go downstairs nearly as often as boxing greats from the past like Julio Cesar Chavez.

The difference between those two fighters is Canelo doesn’t like putting himself in harm’s way to throw body shots. Chavez was willing to take the risk of getting in order to land his body shots. There was a certain mental toughness that Chavez possessed that Canelo doesn’t have. Canelo lacks the mindset to be a great body puncher like Chavez, even though he punches with perfect form. What good is Canelo’s ability to throw to the body if he’s overly concerned with getting hit by his opponents?

“Two weight divisions moving up against the world champion Kovalev. It’s not going to be an easy fight,” said De La Hoya to The Ring Digital about Canelo moving up to 175 to challenge Kovalev for his WBO light heavyweight title on November 2. “I don’t think it’s because it’s an easy fight,” said De La Hoya in talking about why Canelo chose to move up in weight to fight Kovalev.

“The fact that Kovalev is a certain style. Maybe Canelo’s team saw something. ‘Okay, he’s [Kovalev] a stationary fighter. He doesn’t move like Demetrius Andrade. He doesn’t move like Daniel Jacobs. He’s not as elusive, but Kovalev is going to be right in front of us. Maybe we can land that perfect body shot, and maybe we can knock him out. Who knows?

Kovalev’s jab will create misery for Canelo if the Mexican star can’t close the distance to land his shots. When Kovalev fought Bernard Hopkins in 2014, he stayed on the move for the entire fight, and kept B-Hop from landing his shots. The 6-foot Hopkins wanted to get close to land his shots, but he couldn’t because of the movement of the then 31-year-old Kovalev. Now five years later, Kovalev is a little older, and less mobile than he was when he fought Hopkins. If Kovalev can get his mobility back, he’s got an excellent chance of beating Canelo by keeping him at a distance.

Canelo is daring to be great

“So if people think it’s going to be easy, just watch,” said De La Hoya. “We’re here now making this fight happen. It’s going to be historical. We thought he was crazy. What are you talking about? You know he’s a light heavyweight. He’s like, ‘No, I want this guy. I want to prove to myself, and to everybody I can do this.’ He wants to be great.

No fighter out there today dares to be great, and that’s what separates Canelo from everybody else, because everybody else is just everybody else. They do [dare to be great]. Kovalev just fought four weeks ago against a young guy. Now he’s fighting another younger guy, the very best [Canelo]. And Canelo is fighting a big guy [Kovalev], who is a world champion. These are the fights that excite people, and I’m very happy to be part of it,” said De La Hoya.

Keith Thurman out for remainder of 2019 after hand surgery »