Miguel Berchelt vs. Jason Sosa on November 2 on ESPN 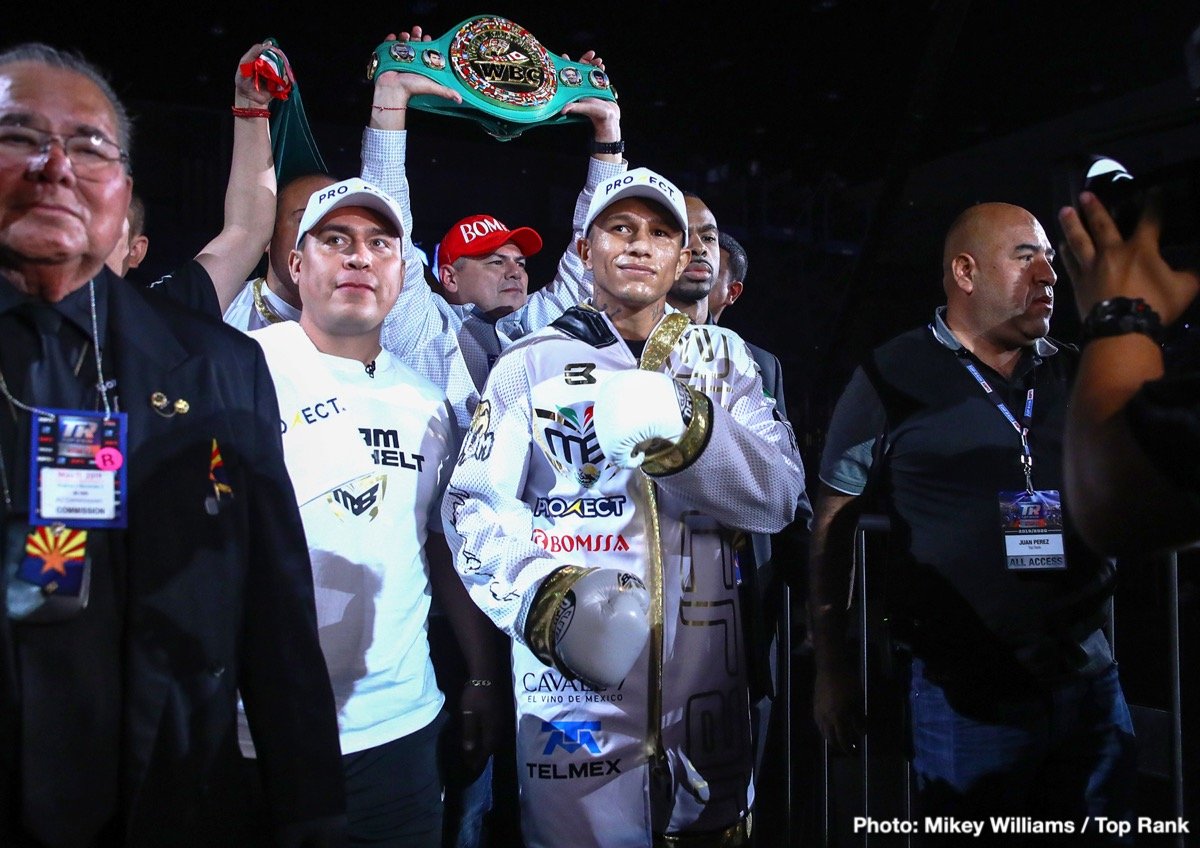 By Dan Ambrose: WBC super featherweight champion Miguel Berchelt (36-1, 32 KOs) will be defending his belt next against former WBA 130-lb champion Jason Sosa (23-3-4, 16 KOs) on Top Rank Boxing on ESPN on November 2 at the Dignity Health Sports Park, in Carson, California. The fight is still being finalized, according to Top Rank president Carl Moretti.

#5 WBC Sosa has turned his career around with three straight victories since losing back to back fights to Vasiliy Lomachenko and Yuriorkis Gamboa in 2017.

Berchelt vs. Sosa will headline on the November 2 card Dignity Health Sports Park.

This is a good stay busy fight for Berchelt. Sosa isn’t a top five contender, and he’s done zero to rate this title shot unless you count beating journeyman.

Moretti says Berchelt vs. Sosa is a ‘Fight of the Year’ candidate

“Stylistically, I think it’s a can’t-miss fight,” Moretti said. “Jason looked really good in his last fight in Philadelphia, and Berchelt always looks good. Combined that with the fight being at Dignity Health Sports Park, which has a great tradition of hosting great fights, and I think you have the making of a fight-of-the-year candidate.”

It’s a bit much for Moretti to say that Berchelt-Sosa will be a Fight of the Year candidate. Sosa, 31, didn’t look great in his losses to Lomachenko and Gamboa. He was over-matched in both fights, and not even competitive. Since losing those two fights, Sosa’s management has scaled back the level of his opposition. In his three-fight winning streak, Sosa has beaten these fighters:

In other words, Sosa has been beating journeyman level opposition lately instead of world class guys. You can’t say that Sosa has turned things around with his career. It’s more of a case of his management backing him off from fighting the talented guys, and putting him in with journeyman that he can beat. That’s not a good sign when you look at who Sosa will be fighting on November 2.

NEWS:   What Was Your Favorite Boxing Movie of Over 50 Made?

Berchelt is one of the best fighters in the super featherweight division, and he might be #1 now that Gervonta Davis has moved up to 135. A fight between Berchelt and Tank Davis likely would have never happened anyway due to them fighting on different networks, and being promoted by rival promoters in Top Rank and Mayweather Promotions. Davis and Berchelt might as well be on different planets.

Berchelt was originally supposed to be defending his WBC title on the undercard of lineal heavyweight champion Tyson Fury’s fight against Otto Wallin on September 14. However, Berchelt needed more time to get down to the 130-pound weight limit for his next defense. September 14 was too soon for Berchelt to drop the weight.

Berchelt is 27-years-old now, and he probably should move up to 135 so he doesn’t need to drain himself to make weight. But he obviously has a good thing going in having a size advantage over some of his opponents at 130. If Berchelt moves up to lightweight, he won’t have that size advantage over most of his opposition. As such, things could rapidly change for Berchelt with him fighting guys that would have the size and the power to give him problems.

This will be Berchelt’s sixth defense of his World Boxing Council super featherweight title he won in 2017 in beating Francisco Vargas. In Berchelt’s successful defenses of his WBC title, he’s beaten these fighters:

Although Berchelt’s fight against Roman was an interesting one, the rest of the fights have been mismatches. Vargas is over-the-hill, and not the guy he once was. He’s no longer one of the top fighters at 130. Miura already retired, and Barrios and Awuku are nothing special.

Berchelt vs. Sosa winner could face Oscar Valdez in early 2020

Top Rank president Moretti has plans for the winner of the Berchelt-Sosa fight to meet up with former WBO featherweight champion Oscar Valdez early near year. That figures to be Berchelt facing the unbeaten Valdez. With Vasiliy Lomachenko planning on moving down to super featherweight in 2020, he could face Berchelt if he’s still WBC champion.

Moretti was really impressed with how good Sosa looked in his last fight in beating Haskell Lydell Rhodes by a 7th round knockout on August 10. Sosa knocked Rhodes down three times en route to stopping him in round 7. However, Rhodes had previously been beaten by Sergey Lipinets, Edner Cherry and Omar Douglas. It was pretty clear from Rhodes’ losses to Cherry and Douglas that he’s a vulnerable fighter.

WBO super featherweight champion Jamel Herring (20-2, 10 KOs) could also face the winner of the Berchelt vs. Sosa fight. Herring has a title defense coming up in November against Lamont Roach Jr. that he needs to win before he can potentially face the Berchelt-Sosa winner in a unification fight. Oscar Valdez would be the bigger name for Berchelt or Sosa to fight than Herring, but we’ll have to see how things go. Top Rank will make the decision.


« Andre Ward: ‘Roy Jones had $40M offer to fight Mike Tyson and turned it down’