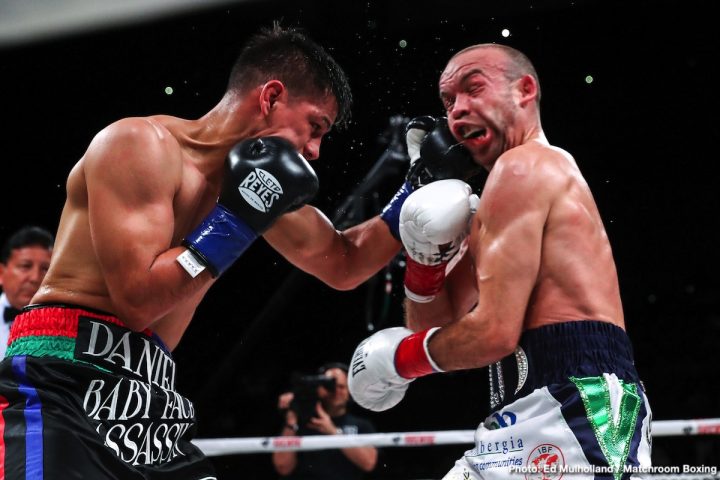 Unified world champion Danny Roman will have to wait a little longer to defend his WBA title.

Roman, who also holds the IBF crown, was forced to pull out of his upcoming fight with mandatory contender Murodjon Akhmadaliev on September 13 due to a left shoulder injury.

Examinations by two Los Angeles-based shoulder specialists revealed tendinitis in Roman’s left shoulder. The primary doctor who evaluated Roman ordered him to suspend all boxing activity for a period of four to six weeks.

“My plan is to rest and take it easy,” said Roman, who would have made the fifth defense of his WBA title that he won in knockout fashion two years ago over Shun Kubo. “I want to fight Akhmadaliev before the year is over. We’ll have a better idea for a date as soon as I get medical clearance to resume training.”

“It’s unfortunate that some people are saying that he’s using the injury as an excuse to not fight,” said Alex Camponovo, matchmaker and general manager at Thompson Boxing. “He’s not running away from any challenge. That’s not who he is. For the other side to suggest anything otherwise is very immature and unprofessional.”

Thompson Boxing and co-promoter Matchroom Boxing are in the early stages of figuring out a new date for the championship fight.

The fight was scheduled for the Hulu Theater in Madison Square Garden in New York.

With a winning bid of $145,000, World of Boxing won the purse bid today for the WBA Super Bantamweight World Championship bout for their fighter, #1 ranked mandatory challenger, Murodjon ‘MJ’ Akhmadaliev, (6-0-0, 5 KOs), against champion Daniel Roman, (27-2-1, 10 KOs). The purse bid took place in Panama City, Panama with World of Boxing being the only bidding party. The fight must take place by September 30, 2019.

Said Vadim Kornilov, “We’re very excited that World of Boxing has won this purse bid and is ready to give ‘MJ’ the opportunity to fight Danny Roman for the WBA Super Bantamweight World Title in September. ‘MJ’ has accomplished a great deal as a professional in just over a year, has fought top opposition from his first fights as a pro, has defended his WBA Intercontinental Title numerous times, and is ready to fight for a world title and become a world champion.”

“’MJ’ is a star in the making and will be ready to unify with other world champions after this fight! Fighters like this excite Mexican and International fans, as they will not step down from any fight, he would rather lose than let down his fans.”

A 2016 Bronze Medalist representing Uzbekistan at the Olympic Games in Rio de Janiero, the 24-year-old Akhmadaliev has very quickly impressed U.S. boxing fans with his remarkable power and world class skills. On November 24, 2018, he was specifically chosen to fight on HBO’s last edition of their iconic World Championship Boxing series, knocking out Isaac Zarate in the ninth round.

Most recently, Akhmadaliev thrilled the Los Angeles fight fans with a stunning third-round knockout of Carlos Carlson at the Forum on April 26, 2019.