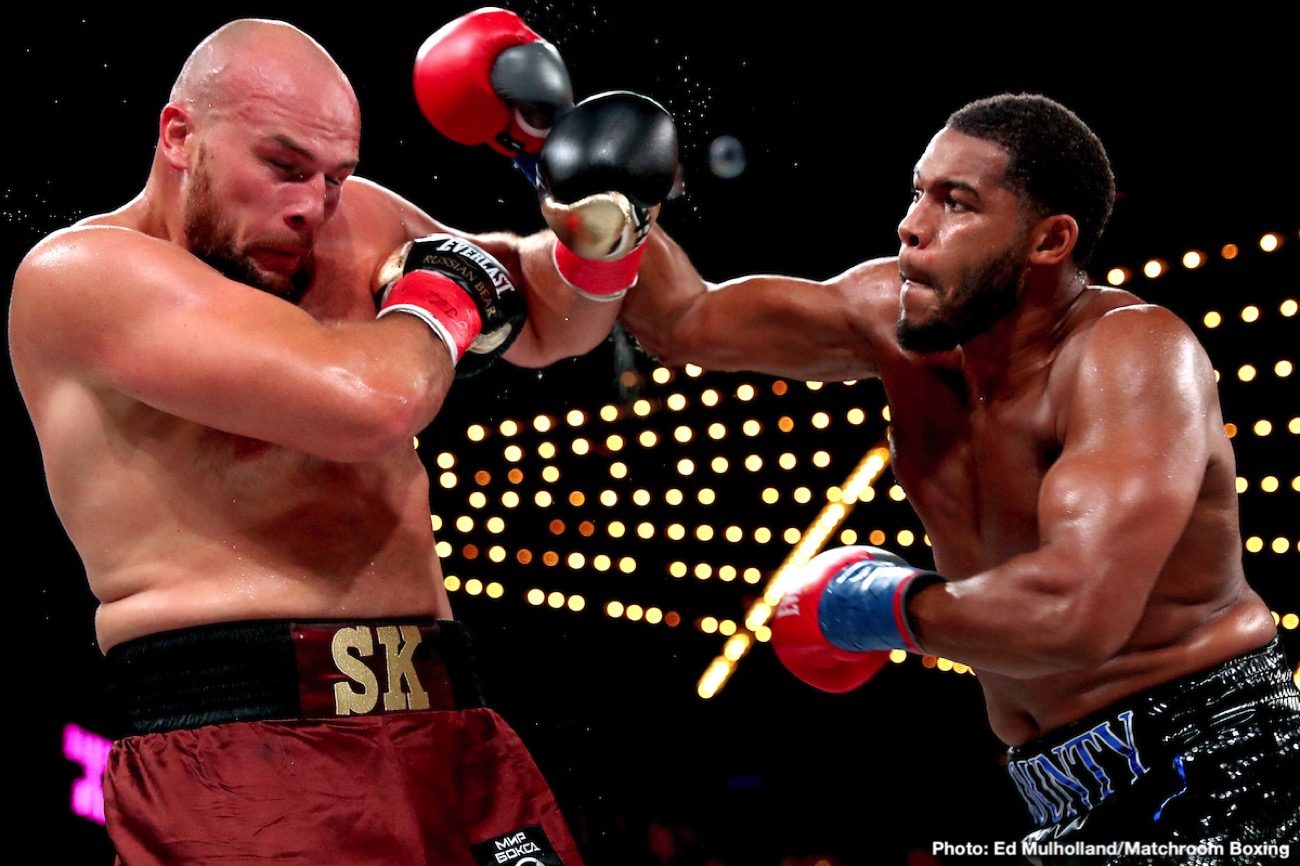 By Dean Berman: Michael Hunter (18-1, 12 KO) put in a great performance last Friday night in defeating the much bigger heavyweight Sergey Kuzmin (15-1, 11 KOs) by a 12 round unanimous decision at Madison Square Garden in New York.

Giving away 36 pounds in weight and 2 inches in height to the 6’4″ 258 lb Kuzmin, Hunter knocked him down in round 5. Hunter, 31, tried to finish Kuzmin, but his huge size and tight guard enabled him to withstand his follow up shots. The judges scored the fight to Hunter by the scores 117-110, 117-110 and 117-110. Hunter says he’s going to study the Kuzmin fight, and figure out how he can knockout bigger heavyweights in the future.

After the fight, Hunter revealed that his promoter Eddie Hearn plans on bringing him back to fight on the Anthony Joshua vs. Andy Ruiz Jr. undercard on December 7 in Saudi Arabia. Hunter says he wanted to fight former WBA heavyweight champion Alexander Povetkin (35-2, 24 KOs) on Matchroom’s December 7 card, and he’s counting on Hearn making that fight happen.  It’ll be up to DAZN, Matchroom Boxing USA, and Sky Sports whether they want to put the Hunter vs. Povetkin fight on the Joshua-Ruiz card. It’s hard to imagine why they wouldn’t want to include this fight, as it would put two high quality heavyweight contenders against each other.

🗣”I wanna fight Povetkin in Saudi.”👀@MichaelHunterII has his eyes on a heavyweight match up with Alexander Povetkin next. 🔥

Who wants to see that fight? 👇 pic.twitter.com/vBFlVDnfIU

“He was a strong dude with a lot of weight. He absorbed it very well,” said Hunter after the fight. “Their guard is tight, I just have to go back to the drawing board and dissect these guys again. I want Povetkin. If you see me Povetkin, I’m coming for you,” said Hunter.

“I wanted the knockout, but we just take it one step at a time,” said Michael Hunter to Fighthype. “I ran up to him, and sidestepped him [Kuzmin] to see where his head was at, and I could tell he recovered pretty well. It was probably more of a flash [knockdown]. He was a little buzzed, but not too hurt. I was planning on doing the same things so it could happen again. As far as his durability, yeah,” said Hunter when asked if Kuzmin was tougher than he expected. “His guard was tight, and he was strong with his hands, as far as keeping a tight guard.

I just got to find some different ways to crack that opening. I’d say a C+ if I were to give it,” said Hunter in giving himself only a fair rating for his performance against the 32-year-old Kuzmin. “I’m still not at 100 percent. I felt like I was at 65. I still have a lot to grow. I’ve had a long road, and it’s not been an easy time as far as business. I’m now getting my feet wet, and I’m starting to progress. Every time you’re going to see me get a little bit better, and a little bit sharper,” said Hunter.

Hunter’s punching power wasn’t enough for him to score a stoppage over Kuzmin. Michael was throwing too many single shots, and they weren’t effective. The fight highlighted the fact that Hunter isn’t a big puncher at heavyweight, but he wasn’t known for his power even at cruiserweight. For Hunter to knockout the bigger heavyweights like Kuzmin, he’ll need to throw more sustained combinations of 4 to 6 shots. On the few occasions that Hunter threw four or more punches in a row, he had Kuzmin in distress. Some of those shots from Hunter were missing during his flurries, and that explains why Kuzmin was able to stay on his feet.

Hunter wanted to use angles against Kuzmin

“We planned on doing a lot of angles, which I ended up not doing in the fight, but that was the game plan,” said Hunter. “I wasn’t really feeling it when I got in there. I did a few here and there, but we just really practiced doing angles in the gym, but I wasn’t able to implement it like I wanted to. That’s what we kind of spoke about, and how come I wasn’t able to do that. We’re just going to go back to the drawing board, and keep working on it,” said Hunter.

Hunter did use angles at times in the fight, and they helped him to some extent land shots. It looked as if Hunter abandoned the movement, because it was causing him to expend too much energy.

Hunter to fight on December 7, possibly against Povetkin

It will get me right where I want to be as far as continuing to stake my claim that I’m one of the baddest dudes on the planet. So I’m excited about it, and I hope they give me the opportunity. I’m pretty sure they’re going to make it some kind of eliminator. Yeah, I think that’s what it’ll be for. I’m not sure yet, but we’ve got to go talk Matchroom, DAZN and Sky Sports to see how they feel about the views, and the fights, and see if it all fits,” said Hunter.

There’s a good chance that Hunter will be facing Povetkin on December 7th. The only way the fight doesn’t happen is if Povetkin, 40, chooses not to take it.

Terence Crawford: ‘Tell Kell Brook to make weight and I’ll dust him off’ »