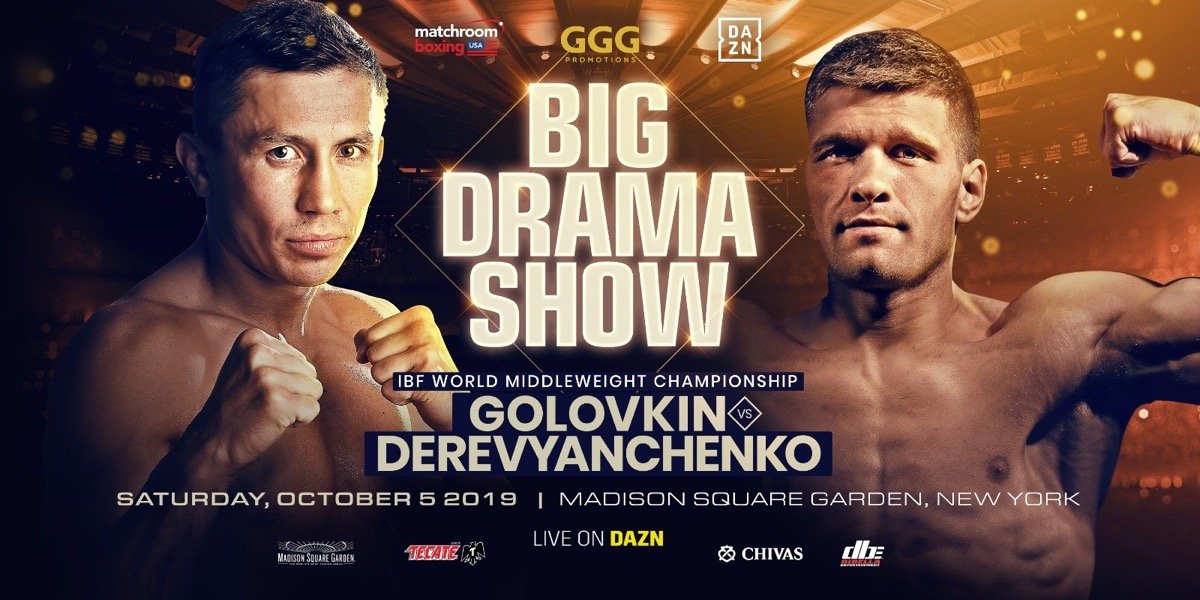 Gennadiy “GGG” Golovkin: On how his excitement level differs this title fight vs. last MSG brawl: “I feel great, I feel like a champion. Every fight for me is like a championship fight. I feel the same. All my fights, last fight, this fight, it’s the same level of excitement.”

His thoughts on the situation with Canelo moving up two weight divisions to fight Kovalev: “Canelo just looks like he didn’t want to box with me or couldn’t box with me, so the only choice he had to go to fight Kovalev. The only thing that I see is that he must have had some sort of problem because he was given the option to fight me and for some reason he didn’t. It means that he did this on purpose, to not fight me, and instead to move to Kovalev.”

“You can’t underestimate your opponent. No matter what, you still have to prepare for the opponent. It’s kind of like a duel, no matter how many duels you have this one could be your last one. So when it comes to the way [Derevyanchenko] approaches the fight and his respect towards me, just shows his upbringing and his character. So, I’ll never underestimate my opponent.”

What he thought of Derevyanchenko’s fight – his only Loss – against Daniel Jacobs: “I saw the fight, and it was a very technical fight. It felt like a sparring session in a way. It felt like both of them knew each other very well. They knew what worked well, and really the decision was made by the corner of the fighter. The fight depended on which corner the trainer would have been in. If Jacobs had the right coach in his corner, he won and if Sergiy had the right coach, he won.”

“I believe that the level GGG’s on, every time he comes to camp for a fight, he looks at it as, ‘This is the top level, and this is the journey to get my titles back.’ So his preparation is always looking to get his titles back.

“Gennadiy’s the boss. GGG promotions has its own entity. Obviously we’re all working partners on DAZN and it was a very nice of him to feel we could add another dimension to the team. We will do that moving forward. It’s happened quite quickly. Obviously this fight got put together and we were involved in the background. Moving forward, we look forward to a huge 2020 for him, as well. It’s about looking at all opportunities, not just in America, but globally as well for GGG Promotions. And that’s what we’re going to be looking to do hopefully starting October 5th.”

“We think Gennadiy is going to make a real statement October 5th at Madison Square Garden and we expect a great challenge from Team Derevyanchenko. There’s a lot of talk right now about the middleweight division, but this is about Gennadiy making his own way, his own moves in a division to recapture the world middleweight title and, of course, we want to thank DAZN for what must be described as an outstanding schedule.”

“I feel really good. Our training went as planned and camp is coming to a conclusion, and I just feel very good and really ready.

“It is a quick turnaround, but I want to give credit to my team and primarily to my manager for making this happen and for getting me this opportunity. I think with the Jacob’s fight, I proved that I am a top middleweight and now I have to take it to the next level.”

“It’s going to sound simple, but I need to move a lot. I need to work behind my jab. And I need to show him different angles.”

“They were both very close fights. I felt Golovkin won the first one because he was stronger. The second one, I agree that Canelo won.”

“Sergiy has prepared for the best GGG he could possibly face. You hear people say it often, but this has been one of the best training camps ever. It speaks to the person that Sergiy is. He’s a hard-working fighter, he’s a quiet soul, and he’s just an enjoyable person to be around. I would pray that any trainer could have a fighter of his caliber and his character to work with, because it’s been fantastic. It really has.”

“Without dispelling any game plan, you have to keep GGG uncomfortable. We all know that GGG fires combinations in sessions of three. It’s one, two, hook or one, two, down. And you just have to make sure that you’re not there receiving those three and keep him off balance. He has a great jab, but so does Sergiy. Just because he does have a great jab doesn’t mean that you don’t try to hold space and control the action just as he does. And after that, just keep working and keep scoring.”

“The object in boxing is to strike without being struck. But we all know everyone in boxing gets hit. So Sergiy has a pretty tough chin and he’s got some good whiskers on him. But we’re not going to be there just to be absorbing punishment. And you’re going to see why we call him the Technician.”

“I’ll tell you something. Johnathon Banks, that young man is like family to me. I’ve known him for a very long time. His mentor, Emanuel Steward, I used to call him Uncle Manny. He’s in really great hands. But as for the Steve Rolls fight, I think that GGG just started a little late. I didn’t see any deterioration of his capability. And when he turned it up, he turned him off. So as soon as that happened, Steve Rolls was gone. That was typical Gennadiy Golovkin, but this is not Steve Rolls that he’s facing on October 5th . This is Sergiy “The Technician” Derevyanchenko and it’s a big difference between the two. We’re talking about the elite versus the elite. And everyone will see that this is going to be a fast action bout and Sergiy will be victorious.”

“On October 5th at Madison Square Garden, Sergiy Derevyanchenko is showing up to become a superstar in the middleweight division. We know that GGG is one of the best fighters in the world. He’s been a dominant middleweight, he’s absolutely a future Hall of Famer. But at this point in his career, he’s not getting younger, he’s not getting faster, he’s not getting better. Any legitimate world class contender at the highest level, and there aren’t a lot of them, but Sergiy Derevyanchenko is one of them, is an incredible risk to GGG. He’s coming into the Garden to shock the boxing world. It’s not going to be a shock to myself, it’s not going to be a shock to Keith Connolly or Andre Rozier or Gary Stark Sr., and it’s not going to be a shock to Sergiy Derevyanchenko.”