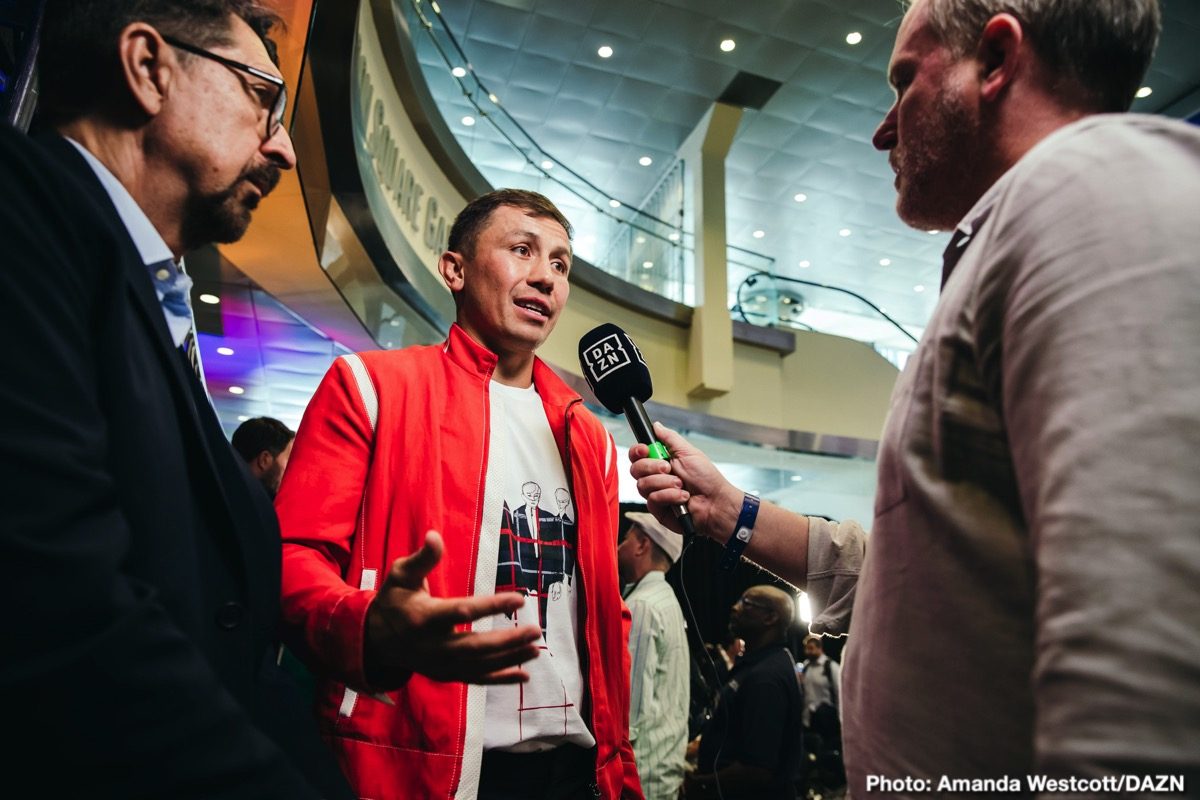 By Doug Berman: Gennady Golovkin’s new co-promoter Eddie Hearn says he’s not going to wait around for Saul Canelo Alvarez to fight him for a lucrative trilogy match in 2020. Hearn says GGG is going to be looking to create his own path rather than waiting on Canelo to face him again.

The Mexican superstar may never fight Golovkin again despite DAZN wanting that match to happen. Canelo has the final say so in who he fights, and he’s not showing interest in facing Golovkin. His next fight could be against WBO light heavyweight champion Sergey Kovalev in November. That’s a fight that Canelo is expected to win. But even he loses, he’ll come out ahead for having taken the risk. Canelo’s risk-taking is putting pressure on Golovkin to take the same types of risks, and thus far he’s not doig that. In GGG’s last fight, he fought little known bottom ranked fringe contender Steve Rolls. It was the worst possible opponent Golovkin could select, and it did nothing for his career to help redeem himself following his loss to Canelo last September.

Golovkin (39-1-1, 35 KOs) is scheduled to fight next month for the vacant IBF middleweight belt against Sergiy Derevyanchenko (13-1, 10 KOs) on October 5. The fight is taking place at Madison Square Garden in New York. DAZN will be streaming it. The main reason why GGG is facing the 33-year-old Derevyanchenko is to fight for the vacant IBF middleweight crown.

Canelo Alvarez told Golovkin that he needed to win a world title for him to give him a third fight, and he’s following his directions. It’s not a given that Golovkin will beat Derevyanchenko though, because this is going to be a hard fight for him. If Golovkin performs like he did in his last two fights against Steve Rolls and Canelo, he could lose to Derevyanchenko. GGG didn’t fight smart in either of those bouts.

If Golovkin wins that fight, Hearn says he’s got four potential options for him to fight. They are as follows:

A rematch between Golovkin and Jacobs is easily the best option of those four. Saunders, Callum and Andrade are unbeaten, but they lack fans. Golovkin would be doing them all a favor by fighting them rather than vice versa. It’s unclear what GGG expected to happen when he signed with Matchroom, but it’s not going to change things for him by creating new opportunities. Golovkin could have fought Saunders, Jacobs, Anrade and Callum without signing with Hearn.

“You’ve got Demetrius Andrade. I would love Demetrius Andrade to fight Golovkin or Canelo,” said Hearn. “We’ve got Billy Joe Saunders at 168 [lbs]. Has the ability to come back down to 160 [lbs]. Danny Jacobs is fighting at 168, but probably could still make 160. If those guys want to move up, you’ve got Callum Smith as well. “I think the key in 2020 is get all those fights made. Canelo is going to do his own thing. You’ve got to make your own moves,” said Hearn.

Shakur Stevenson to Vasiliy Lomachenko: “See you at 130, Loma” »