Shakur Stevenson to Vasiliy Lomachenko: “See you at 130, Loma” 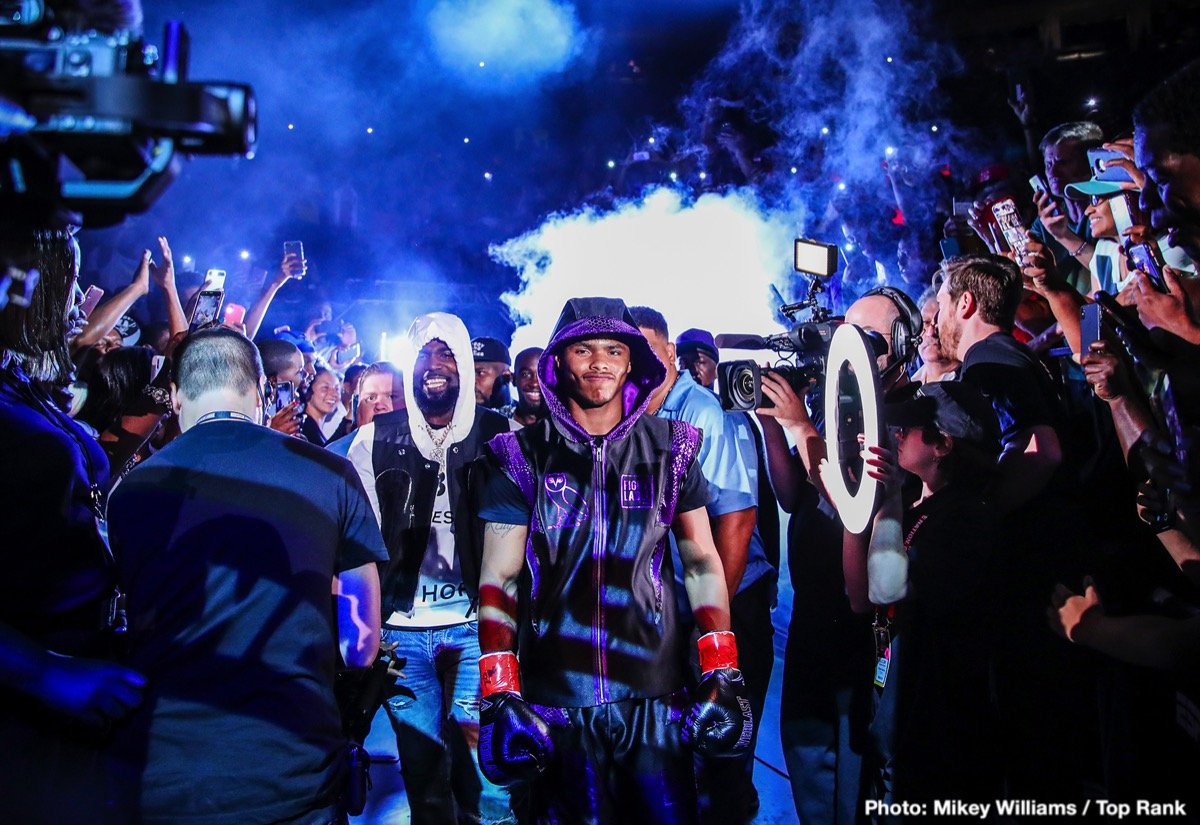 By Chris Williams: Shakur Stevenson (12-0, 7 KOs) is looking forward to Vasiliy Lomachenko moving down to super featherweight if/when he unifies the 135-lb weight division first. 2016 Olympic silver medalist Stevenson obviously is interested in facing the 2-time Olympic gold medalist Lomachenko once he comes down to 130, and giving him another loss.

It’s up to their mutual promoters at Top Rank when the two of them can face each other. Stevenson is chomping at the bit to fight Lomachenko.

The 31-year-old Lomachenko (14-1, 10 KOs) is starting to look vulnerable, and he could be there for the taking for the 22-year-old Stevenson. Luke Campbell 20-3, 16 KOs) fought well enough to win 4 rounds against Lomachenko in their fight last weekend, and he’s nothing special. If Campbell, 31, had a shred more talent, he would have beaten Lomachenko. Although Lomachenko isn’t that old, age is clearly starting to kick in. He had close to 400 amateur fights before he turned pro, and that’s like a full career.

“See you at 130 Loma 👹 when that happens y’all gone see I’m the f—–g Truth!!!, said @ShakurStevenson. All that “other side of the street” s–t in boxing is so trash. It takes away from the sport I’m a boxer and I’m a boxer fan I enjoy seeing and being in the best fighting the best.. So, Bob [Arum] and Al [Haymon] and even Eddie [Hearn] and Oscar [De La Hoya] need to have a big a– meeting and make BOXING GREAT AGAIN,” said Stevenson.

Lomachenko ready to be beaten

Stevenson and Devin Haney both look like they’re ready to beat Lomachenko. The younger lions are ready to take over, and the thing stopping the fights from happening is Top Rank.  Bob Arum might not want to lose one of his revenue streams if he matches Lomachenko to Shakur. Arum has been so busy comparing Lomachenko to a young Muhammad Ali. He might not like looking silly if Stevenson beats him. Lomachenko already got beaten by Orlando Salido, a fighter with 14 losses on his record. They were quick to excuse the loss for Lomachenko blaming it on Salido missing weight, and having a size advantage.

Pain gone turn me into a superstar..

The reality is, Lomachenko was exposed by the better fighter in Salido. If Stevenson beats Lomachenko, then it leaves Arum in a position of having to figure out what to do with the two-time Olympic gold medalist. Does he keep him at super featherweight or drop him down even lower to featherweight. Lomachenko is there to be beaten now by Stevenson, Devin Haney, Oscar Valdez and Miguel Berchelt. It’ll be interesting to see how long Arum takes before he lets those guys fight Lomachenko. Arum has put in all this work in turning Lomachenko into a star. All that sweat and blood will have gone downhill if Lomaachenko lose to Stevenson or one of the other young lions.

Stevenson’s punching power is improving with each fight, and he’s looking like a real talent. In his last five fights, Stevenson has beaten these guys:

With each fight, Stevenson is getting better and better.  Stevenson is fighting Joet Gonzalez next for the vacant World Boxing Organization featherweight title. The title was recently vacated by Oscar Valdez, who has moved up to super featherweight.

Carl Frampton vs. Isaac Dogboe set for November 30 in California »