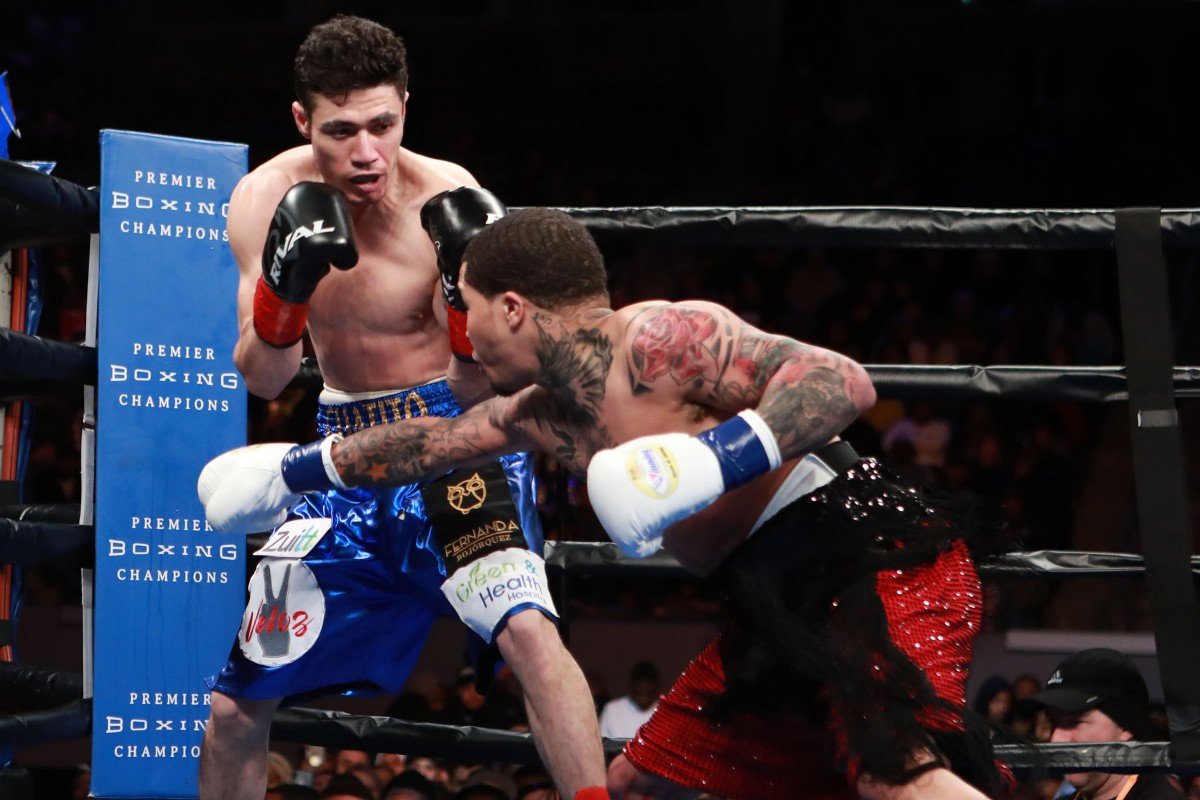 By Doug Berman: Gervonta ‘Tank’ Davis (22-0, 21 KOs) has officially vacated his WBA super featherweight title in order to move up to lightweight to seek out bigger fights against the likes of unified champion Vasiliy Lomachenko. Davis can still easily make weight for the super featherweight division, but he wants the opportunities that the lightweight division can give him.

His rationale for moving up to lightweight is to capture another division world title. Thus far, Davis has won the IBF and WBA 130-lb titles. If he can win a belt at 135, it would make him a two-division world champion. The positive about Davis holding the WBA super featherweight title is he can use that to get a #1 ranking at lightweight to get a quick title shot.

Davis left the door open to return to the super featherweight division in the future for important fights. One of them might be against Lomachenk0, 31, if he chooses to move back down after he unifies the lightweight division.

Hopefully, WBA/WBC/WBO champion Lomachenko will remain at 135 long enough to fight Davis if/when he unifies the division completely. He’s currently waiting to take on the winner of the Richard Commey vs. Teofimo Lopez fight for the IBF lightweight title. That’s the last remaining strap at 135 that Lomachenko has yet to get his hands on.

This is a move that has been talked about for some time, as Davis, 24, is fed up with trying to chase fights against the other top guys at 130. The super featherweight division is barren of big names right now, and filled with belt holders.

Tank Davis wants to fight Lomachenko “at the right time”

Davis does figure to meet up with Lomachenko, 31, at some point, but not right now. Lomachenko fights for ESPN, and is signed with Top Rank. Davis is signed with Mayweather Promotions, and fights on Showtime Boxing. Putting together a fight between him and Lomachenko will be a formidable task.

It’s not impossible obviously, because Top Rank and Lomachenko both want that fight. It’s still too early to make the fight with Lomachenko, because the match needs to marinate more before they make it. Lomachenko and Davis’ popularity will continue to grow for the next three to five years. By the time they face each other, they’ll be glad they didn’t fight earlier.

“I believe it will happen, but it got to be at the right time,” said Davis to ESPN.com.

Lomachenko still has to win a few more fights to build his name brand before he can be considered for a fight against Davis. The two-time Olympic gold medalist Lomachenko didn’t look spectacular in his last fight against Luke Campbell on August 31 in London, England. Lomachenko got the win, but looked vulnerable. He captured the vacant WBC lightweight title with the victory.

Tank Davis had few opportunities at 130

Davis and his promoters at Mayweather promotions were hoping to setup a fight against IBF super featherweight champion Tevin Farmer, but his promoter rejected the offer that was made to them for a unification fight against Gervonta. Davis could have stayed at 130 for the next five to ten years, but there was nothing there for him.

Farmer is a decent fighter, but he has no following. It wasn’t even worth Davis’ time to fight him, because the casual boxing fans wouldn’t have taken notice. Davis and Farmer have been going around in circles for months trading trash talk on social media. What’s made the match difficult to make is the fact that the two fighters are with rival promoters, and compete on different networks. Davis is with Showtime, and Farmer is signed with Matchroom Boxing and fights on DAZN.

“I just want to move up and try to win more belts, basically make myself one of the top guys,” Davis said to ESPN.com. “So I think it was best for me to move up and try to get one of them belts. If not, I’m comfortable fighting at 130 [pounds]. I can actually come back down and fight at 130…it was frustrating not being able to get big fights at 130. So I’ll move up and see who I can get at 135.

Lomachenko vs. Davis may not happen soon

Some boxing fans believe Tank Davis won’t fight Lomachenko (14-1, 10 KOs) for another 3 to 4 years until he’s 35-years-old. If Davis does choose to wait until Lomachenko has aged more, then he’s not going to have anyone to fight at 135. In other words, there’s no point in Gervonta moving up to super featherweight if he’s not going to fight .

It’s in Lomachenko’s best interest to stay in the same weight class that Gamboa is fighting at. The fight is already going to be difficult to make. Lomachenko doesn’t need to compound the problem by moving away from Davis.

There’s a possibility that the two-time super featherweight champion Davis’ first fight at lightweight will be against Yuriorkis Gamboa (30-2, 18 KOs). That would be an interesting fight for a lot of boxing fans. The 2004 Olympic gold medalist Gamboa, 37, isn’t the fighter that he used to be, but he still has a lot of talent, and he’s well known in the U.S.

Gamboa recently fought on the undercard of Davis’ title defense against Nunez on July 27 at the Royal Farms Arena, in Baltimore, Maryland. Gamboa wiped out former former WBO super featherweight champion Roman ‘Rocky’ Martinez by a 2nd round knockout.

Davis has looked really good in 2019 in beating Ricardo Nunez and Hugo Ruiz in quick knockouts.

Nunez last 2 rounds with Davis last July, and Ruiz was stopped in the 1st round by Tank earlier this year in February. Davis had hoped to face former three division world champion Abner Mares in February, but he suffered an eye injury and was replaced by Ruiz.