Errol Spence Jr. and Shawn Porter vow to KO each other on face-to-face

By Kenneth Friedman: Errol Spence Jr. and Shawn Porter both were in great form talking trash to each other during their recent Face to Face on PBC on Fox. IBF welterweight champion Spence let WBC champ Porter know that he’s going to be congratulating him afterwards when he beats him to become the unified 147-lb champion.

In predicting a 1st round knockout of Spence, Porter went off into the deep end with that call. It was hard to take Porter seriously with that comment, because he’s not that type of a puncher. He couldn’t dent Adrien Broner’s gym, and he failed to knockout Keith Thurman. If Porter chooses to slug, he could get hurt by Spence.

Spence (25-0, 21 KOs) and Porter (30-2-1, 17 KOs) are fighting at the end of the month on September 28 on Fox Sports Pay-Per-View at the Staples Center in Los Angeles, California. Errol is a small favorite to win the fight with the odds-makers, but most boxing fans see Spence as the clear winner. They feel that he’s too strong, too big and too skilled for Porter. The odds-makers have their own opinion on the fight that deviates from the majority of the fans.

Spence: “This is something I’ve wanted for a long time to get the WBC belt.”

Porter: “I heard you clearly. Was there hesitation? Maybe. Do you really believe it? I don’t know. You’ve never seen anybody knock me out. You can say what you want to say, but doing something is completely different.”

Spence and Porter know how to close the show early 👀

Whose 1st round KO list is more impressive? pic.twitter.com/1Hwx9f2mQj

Spence was unable to knockout former four division world champion Mikey Garcia last March. A lot of boxing fans were critical of Spence when he failed to knockout a smaller, weaker fighter like Mikey.

Spence: “I promise you that.”

Porter: “Come get it. Come get this right hand, and this left hook.”

Porter: Well, then make me miss.” 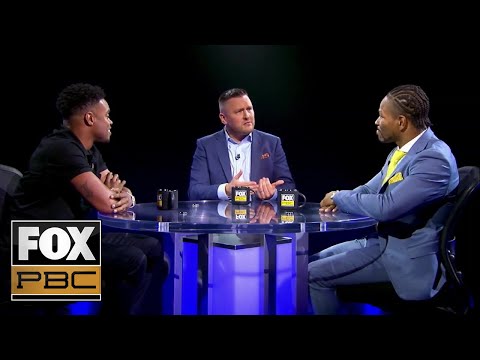 Shawn thinks he can out-box Spence

Spence: “The best part about that is I’m better than you talent-wise, skill-wise, and I know I got my dog than you. You’re going to find out September 28th.”

Porter: “You got more dog than me? I guess we’re going to find out. And, I think experience is going to play a major role in this fight. I don’t think he’s been in the ring with someone that has made you make adjustments. That has made you get out of your comfort zone. On September 28th, that’s exactly what I plan to do.”

Spence: “He doesn’t have the skills to beat me. I’m not worried bout Shawn boxing like he did with [Yordenis] Ugas, and like he did against Danny Garcia. He’s not going to have no choice but to come forward, period.”

Spence says Porter has no option but to come forward

Porter: “What makes you think that’s the only way I can beat you?”

Spence: “Like I said, you’ll have no choice but to come forward. Why do I need to tell you for? What sense is that going to make?”

Porter: “I want to know where the confidence comes from.”

Porter: “Come get it. 1, 2, 3. Make them however you want to make them. Shawn Porter, Errol Spence, and Manny Pacquiao. After this, there’s only two.”

Spence: “I want to be a legend in the sport, and he’s in my way. I’m not thinking about Manny Pacquiao right now it’s Shawn Porter.”

Porter: “You can still have your legacy and everything. I’m just going to slow you down a little bit.”

Porter: “Oh yeah, most definitely. It’s all about timing,” said Porter when asked if he can stop Spence. “Everything you’re saying to me right now, I’m going to shoot it right back at you. The difference is, I’m willing, and I’m capable of doing it in the ring. I don’t think you are.”

Spence: “He knows I am. So it doesn’t matter what you say. You can lie to yourself all you want.”

Shawn says he’s going to knockout Spence in 1st round

Spence: “You’re not going to knock out. Who did you knockout in the 1st round?”

Porter: “It’s going to be one of the most exciting knockouts of the year. I’m going to leave this plain and simple, baby. No matter how this fight goes, I’m leaving this ring with the belt, because you are who you are, it’s going to be exciting.”

Spence: “You’re not. You’re going to be congratulating me as the unified champ.”