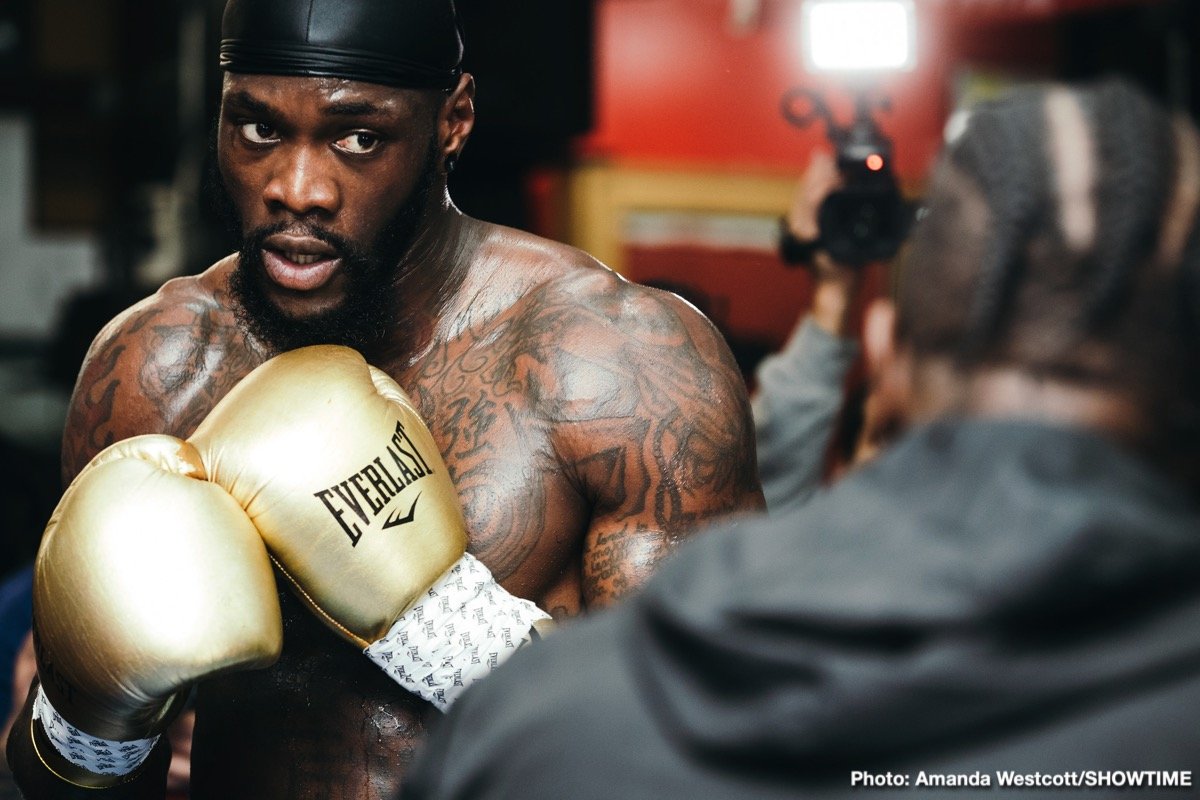 By Trevor McIntyre: Deontay Wilder (41-0-1, 40 KOs) is predicting a 1st round knockout victory over #3 WBC ranked contender Luis Ortiz (31-1, 26 KOs) in their rematch on November 23. The fight still hasn’t been announced, but it’s reportedly going to be made official on September 28 before the Errol Spence Jr. vs. Shawn Porter unification fight.

Wilder is going to need a quick knockout of Ortiz to ensure he can face Tyson Fury in their scheduled rematch on February 22.

Wilder will be making his 10th defense of his WBC heavyweight title against 40-year-old Ortiz. Few boxing fans expected Wilder to hold onto his title for this long after he won the WBC title four years ago in beating champion Bermane Stiverne by a 12 round unanimous decision on January 17, 2015.

The closest Wilder has come to losing his World Boxing Council belt since then was his 12 round draw against Tyson Fury last December at the Staples Center in Los Angeles, California. Fury had a shot at beating Wilder going into the championship rounds, but he was knocked down twice. Wilder had Fury knocked out in the 12th, but the referee Jack Reiss opted to give a count despite Fury being unconscious.

Wilder says he was sick last time he fought Ortiz

“I had the flu during that time. I was very ill. No one knows this but my team,” Wilder said to ESPN.com “I only had a few weeks to train for him. I was too sick to train.  I don’t make excuses, but I was very ill and I was able to do what I did with him then. Now I’m super strong. By me already knowing him it’s going to make it even easier. I’m getting him out of there. Expect to see a first-round knockout,” said Wilder.

This is what Wilder said in announcing his rematch with Ortiz last May:

It’s surprising that it’s taken four months for the official announcement of the Wilder vs. Ortiz fight. Wilder has been busy negotiating a rematch with Fury for February 22. The Ortiz fight is still important for Wilder, but it’s taken a backseat while he’s been in negotiations with Fury.

Ortiz gave Wilder a scare last year in March 2018 when he came close to being knocked out by the talented Cuban southpaw. Wilder got through a shaky 7th round, and came back to stop Ortiz in the 10th round.  Ortiz has won his last three fights since then in beating Christian Hammer, Razvan Cojanu and Travis Kauffman. He’s looked good, and is still dangerous at 40-years-old. Wilder will need to be careful at all times against Ortiz, especially if he’s looking for a 1st round knockout.

NEWS:   Tyson Fury: Wilder would KO Joshua, the businessman, in the 1st round
568 shares


« Michael Hunter on the cusp of big fights