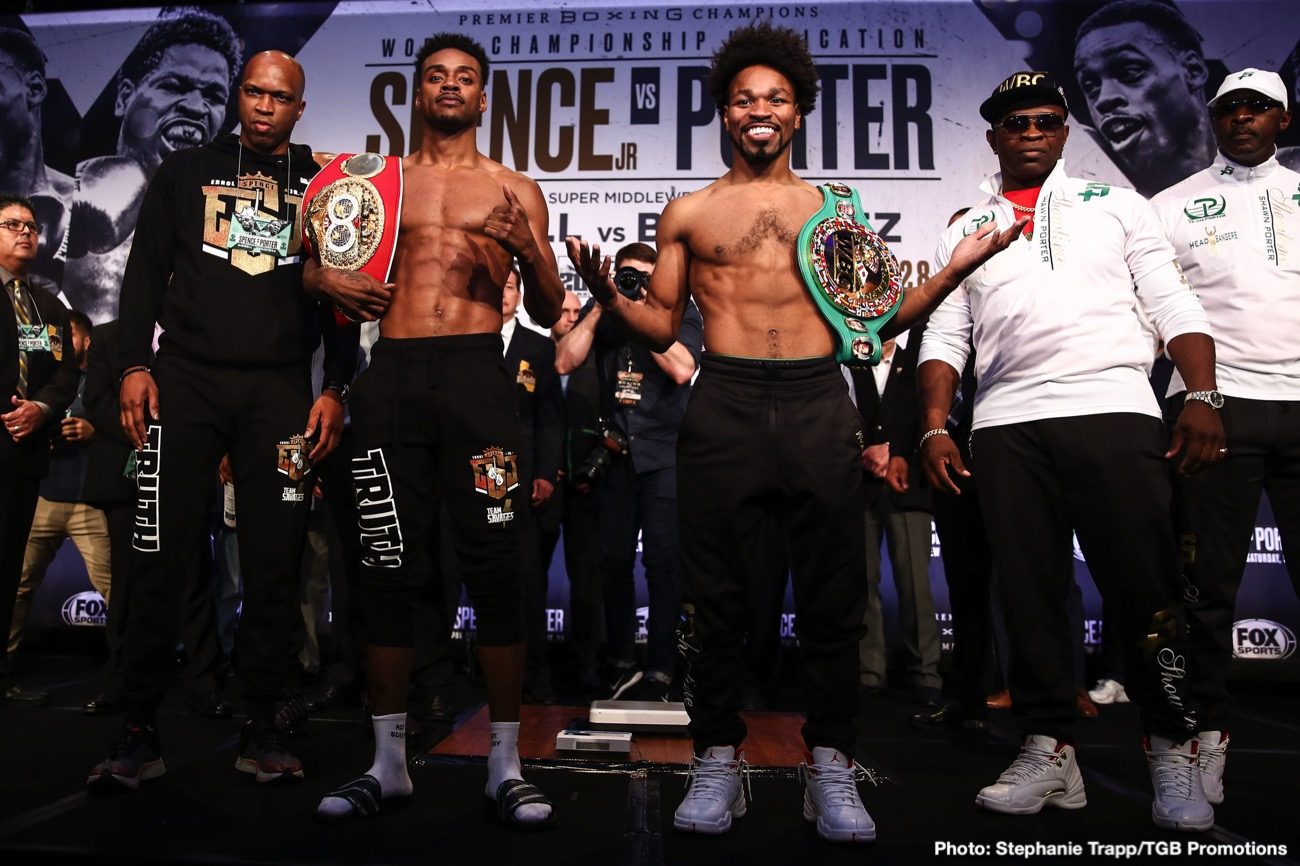 By Sean Jones: Promoter Oscar De La Hoya is leaning in the direction of Errol Spence Jr. for his unification fight this Saturday night against WBC welterweight champion ‘Showtime’ Shawn Porter on Fox Sports PPV. For De La Hoya, the fight comes down to the size advantage that the unbeaten IBF champion Spence (25-0, 21 KOs) has over Porter (30-2-1, 17 KOs).

Oscar thinks the size of Spence could be the deciding factor in the outcome. Porter is fighting a guy that is bigger, stronger and more talented than the fighters he’ faced in the past. The two fighters have a common opponent in Kell Brook. While Porter lost to Brook by a 12 round majority decision in 2014, Spence stopped him in the 11th round in 2017.

“I think Errol Spence is a little too big for him, because he knows how to use his height, and his reach, and his power, but he’s smart in the ring,” said De La Hoya to Behind The Gloves in talking about Spence-Porter. “But Porter is a machine. I think he’s going to come right at him. He’s got a great chin, he’s strong, and he’s going to smother him [Spence] maybe. Unlike [Mikey] Garcia, who couldn’t do anything with Spence; obviously because he was jumping up two weight classes.

The size advantage that the 5’9″ Spence has over Porter is only two inches, but it just seems like a lot more. If Porter had better punching power and hand speed, it would negate the height and reach advantage that Spence has. Keith Thurman thinks Porter has lost power as he’s aged, and is no longer capable of doing damage with his shots.

Spence: Porter will hand the WBC title over to me

Spence will need to take the WBC title from Porter on Saturday night, because he’s going to put up a fight. The only way Porter does hand the belt over is if he mimics Mikey Garcia, and just focuses on survival. That was a real disappointment the way Mikey fought in such a timid manner in his one-sided loss to Spence last March. I’d like to think that Porter wouldn’t do that, but he fought poorly against Yordenis Ugas.

De La Hoya: Canelo is the only guy that wants to fight the best

“I have to put Canelo first just because of who he’s been fighting, and I strongly feel Canelo is the only guy that wants to fight the very best,” said De La Hoya. “All the other fighters, the first question they ask is, ‘how much money am I going to make? Canelo doesn’t even ask that. ‘I want to fight the best,’ and then he’s going to make the money, of course. I think Crawford and Lomachenko are up there.

“They’re tied. But look at Crawford. I mean, I think Crawford has the potential to become a mega-star, a super star, because of his ability and craft. I’m sure he wants to fight the very best as well. Lomachenko is up there as well, and I think he’s a tremendous fighter. I think he can fight at 140 as well if he wants to and do well,” said De La Hoya.

Saul Canelo Alvarez isn’t fighting the best in taking on WBO light heavyweight champion Sergey Kovalev on November 2. Kovalev is seen as the fourth best at 175 behind Artur Beterbiev, Oleksandr Gvozdyk and Dmitry Bivol. Kovalev is on the downside of his career, and was almost knocked out in his last fight against Anthony Yarde. At 168, Canelo chose to fight Rocky Fielding rather than Callum Smith, David Benavidez, Billy Joe Saunders or Caleb Plant. Fielding is arguably the 10th best fighter in that division. It would be nice if Canelo always fought the best, but then again he probably have a lot more losses on his record.