By Dan Ambrose: Danny Garcia says he deserves to be Manny Pacquiao’s next opponent more than Mikey Garcia, who is coming off of a loss to Errol Spence Jr. Mikey has been talking recently about Team Pacquiao being interested in making a fight with him. However, Danny says he’s hearing rumors that Pacquiao wants to fight him, and he feels he’s more deserving for that match than Mikey.

Both Mikey and Danny Garcia (35-2, 21 KOs) aren’t doing too well with their respective careers at the moment. Danny has lost two out of his last four fights, and he hasn’t beaten a real threat since his victory over Lucas Matthysse in 2013. Danny’s wins since that fight have been against beatable foes like Brandon Rios, Adrian Granados, Samuel Vargas, Robert Guerrero, Rod Salka and Lamont Peterson. Danny can’t be counted on to beat the top level welterweights.

“I just heard he wanted to fight me, and I didn’t get no phone calls yet or nothing,” said Danny Garcia to Fighthype about Manny Pacquiao rumored to be interested in facing him next. “If it’s true, hopefully I get a phone call soon. I just heard on the Internet.”

Mikey lost his last fight in a one-sided defeat to IBF welterweight champion Errol Spence. It was a morale victory for Mikey due to him going the full 12 rounds against Spence. Not too many fighters nowadays can claim that status.

“I would be a little bit disappointed. I’m not going to lie, because I feel I deserve a big fight,” said Garcia when asked if he’d be upset if Pacquiao chooses to face Mikey Garcia next.  “I fought everyone at 140 and 147, but he’s [Pacquiao] a legend. He can do what he wants. I can’t hate on that. I definitely feel like I deserve that. If not, then there’s going to be something else in the future.

“He looked great. I think he looked better in the [Keith] Thurman fight,” said Danny in rating Pacquiao as having improved recently. “I’m just ready. I feel like I’m ready.”

The truth is that neither Danny or Mikey Garcia deserve a fight with Pacquiao. At this point in both of their careers, they just seem like they’re desperate for the big payday they would get in fighting Manny. Neither of them are beating the top level welterweights to earn a fight with Pacquiao. Mikey has fought just once at 147, and that was his losing effort against Spence. It would be nice to see Danny beat someone like Yordenis Ugas, Keith Thurman or Shawn Porter to earn a fight with Pacquiao. He probably won’t fight any of those guys though. Porter and Thurman both beat Danny, and they likely do it again if he dared fight them. 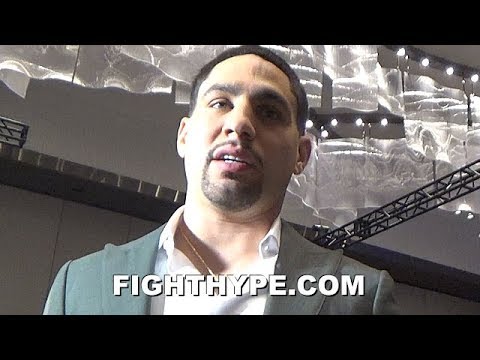 Haney: I could beat everyone Lomachenko has beaten »