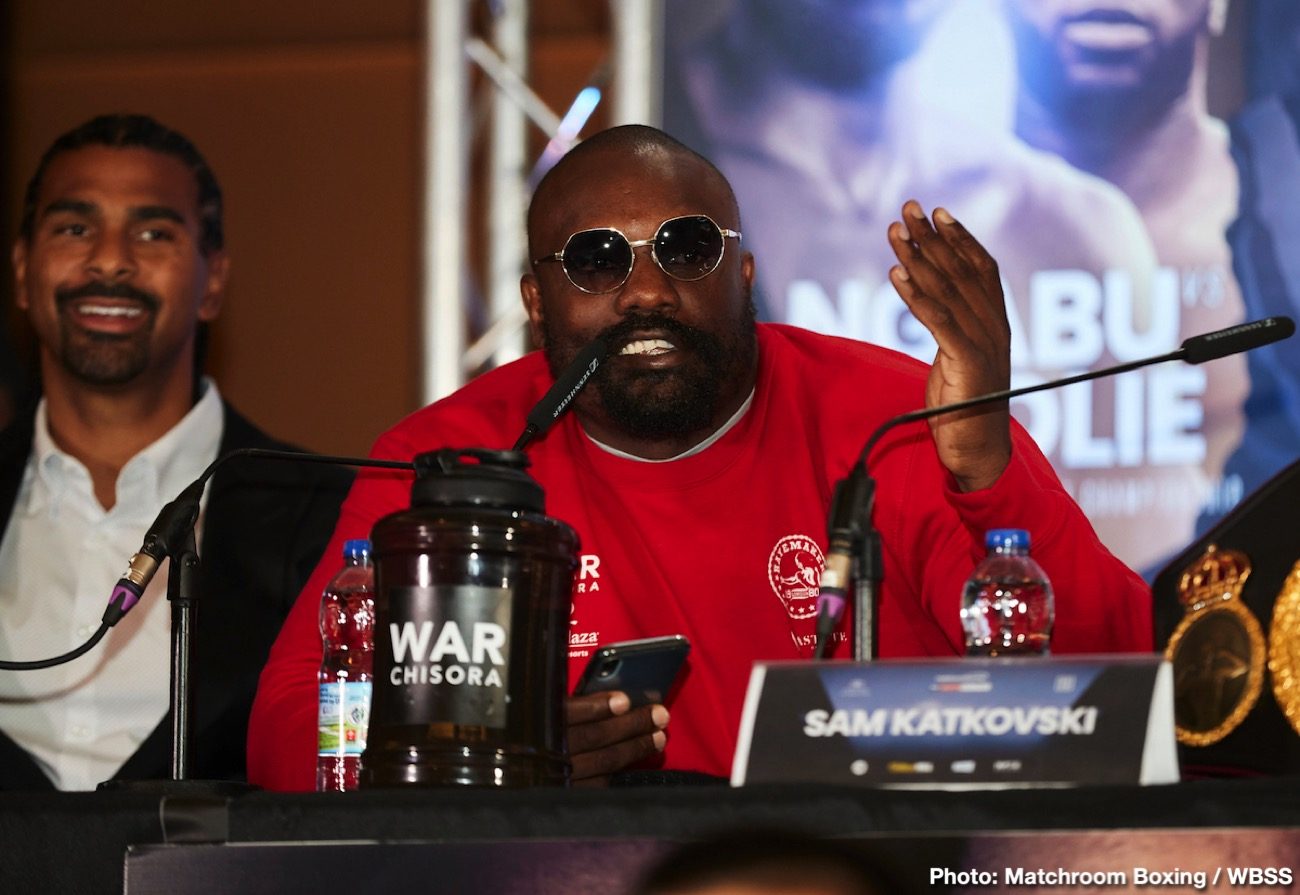 By Charles Brun: An unhappy Dereck Chisora made a mess of things in going on a major rant during Monday’s news conference for the Regis Prograis vs. Josh Taylor card at the O2 Arena in London, England. The event is taking place next month on October 26, and it’ll be shown on DAZN in the U.S and on Sky Box Office in the UK.

Dereck Chisora furious at being put on undercard

Chisora’s main issue was him believing that his fight against former WBO heavyweight champion Joseph Parker should be in the main event. He says he either wants more money to fight on the undercard or he’ll pull out of the fight.

Matchroom Boxing promoter Eddie Hearn positioned the Chisora-Parker fight as the co-feature, and put the Prograis-Taylor fight as the main event. That was a questionable move on Hearn’s part, as Chisora is better known than Prograis and Taylor. Although IBF light welterweight champion Taylor (15-0, 12 KOs) is a talented fighter, he’s mostly popular in his home country of Scotland.

Here’s the exchange between Chisora and Hearn:

Chisora: “No, I’m f—g being serious. You want to put these little guys that no one knows about on my show, and then you want to try and mug me off. F– that. I’m being serious. You know this is not right. The Muhammad Ali trophy, no one gives a f— about it no more. Nobody gives a f— about little guys anymore. They only give a f— about the heavyweight game. The big guys in the top 10. The big guys. So for you to try and give me chief support on my own bill, that’s b—-.”

NO BACK-UP DANCER@DerekWarChisora wanted to clear up EXACTLY who is the main event at the O2 even if it ruffled the feathers of @RPrograis 🙈 😬 pic.twitter.com/ehg3dNaKFV

Chisora: “Nobody cares about you, bro.

Prograis: “We’re number one and number .”

Chisora: No, no, no, don’t get me started, bro.I don’t give a s–t. Am I taking the main stage or no? If I’m not, then I want more money. Adam [Smith], who’s taking the main event. You’d better answer me or I’m going to go ballistic now. I want more money. I’m not going to sell out the O2 for these guys to come take my fans, no. If that’s the case, then pull me out of it, then there won’t be a Box Office. I’m tired of selling out shows, and me not making money. So give me some of that money you’re making and put it in my pocket. Yeah, everyone is going to be happy.

You tell me that I’m going to be the main event. If I’m not, then give me more money, and then we can get to business. I’m sorry for doing this right now, but I’m feeling like your f—g me without no Vaseline. That is it. No one gives a f— about the Muhammad Ali trophy. The heavyweights are back now. We haven’t heard about the Ali Trophy in the last six months, and now they [Prograis and Taylor] want to jump on our f—g show on Sky. F– that. Give me more money, and we can get to business. If you can’t, then just tell me you can’t,” said Chisora.