Arum: ‘Let GGG stew in his own bitterness’ 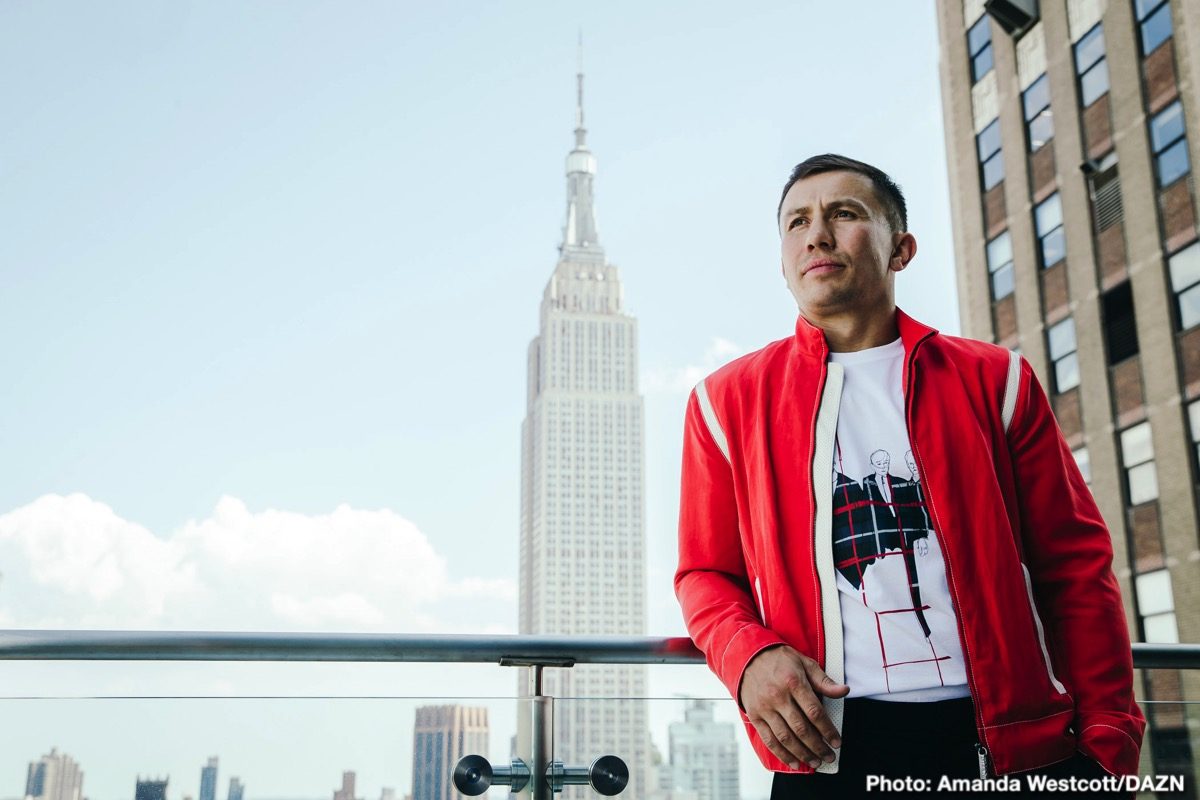 By Sean Jones: Gennady Golovkin should NEVER get another fight against Saul Canelo Alvarez, as far as Top Rank promoter Bob Arum is concerned. Arum is still against Canelo giving GGG a trilogy fight due to the trash talking that Golovkin (39-1-1, 35 KOs) did about Alvarez in the past.

Instead of Gennady getting third fight with Canelo Alvarez, Arum wants his own fighter Sergey Kovalev to battle the Mexican superstar. Canelo will likely be challenging Kovalev (34-3-1, 29 KOs) for his WBO light heavyweight title in November on DAZN and ESPN.

It’s unclear whether Arum is hoping that Canelo faces his other Top Rank guys at 175 after he challenges Kovalev. Arum has the following light heavyweights under contract with him:

If Canelo devotes the next year or two facing Arum’s light heavyweights, that might put a smile on his face.

Arum: Canelo not as skilled as Crawford and Lomachenko

Arum is obviously the wrong person to ask when it comes to comparing his own stable guys Terence Crawford and Vasiliy Lomachenko with Canelo. Obviously, it’s Arum’s job to promote his own fighters Crawford and Lomachenko, and he’s not going to say that Canelo is more skilled than them. All we can say is Canelo has a more fan-friendly style of fighting than Crawford and Lomachenko. Ultimately, that’s all that counts in boxing.

The fans want to be entertained by exciting fighters

It doesn’t matter if one fighter has more technical skills than another. If they’re not as popular or exciting to watch, then they’re not coming out ahead. Crawford and Lomachenko are too finesse oriented for them to ever become the ‘Face of Boxing.’ Floyd Mayweather Jr. was a finesse fighter, but he had blazing hand speed that made people want to watch him. Crawford and Lomachenko aren’t super fast. They’re just technical fighters that do a lot of showboating, and unfortunately they haven’t become big stars like Canelo.

“If I was Canelo, I’d never fight GGG. After what GGG said about him, calling him a ‘cheat,’ and calling him horrible stuff,” said Arum.  “Mexicans don’t take that crap. Why should Canelo give Golovkin ever another opportunity to get in the ring with him again. Golovkin doesn’t deserve it. Golovkin can stew in his own bitterness,” said Arum.

There’s arguments both ways,” said Arum when asked about Canelo’s chances in fighting Kovalev at 175. “Yeah, he’ll [Canelo] be giving away height, and he’ll be giving away weight. But, what is the biggest weakness of Kovalev? [taking body shots]. Exactly. What does Canelo do better than anyone else? Throw body shots. So who knows how that fight comes out,” said Arum.

DAZN won’t be too happy if Canelo listens to Arum’s recommendations, and never fights Golovkin again. They signed GGG thinking that the two fighters would face each other a third time. While Canelo does have other options for fights, none of them will bring in the same amount of subscriptions as a trilogy match against Golovkin. Canelo vs Sergey Kovalev will interest some boxing fans, but it won’t be the same as a third GGG fight. Kovalev isn’t as popular as Golovkin, and for good reason. He’s been beaten three times in the last three years in losses to Andre Ward and Eleider Alvarez.

“[Anthony] Yarde has no chance in the light heavyweight division unless he gets himself a real trainer,” said Arum about Anthony Yarde in reacting to his loss to Sergey Kovalev. “You don’t go into those fights without sparring. That’s crazy. You don’t go into a fight against a Kovalev, who has a great jab without throwing one jab. You just don’t do that. And, you can’t beat any of these guys. As close as he came with Kovalev, he would have no chance with [Oleksandr] Gvozdyk or [Artur] Beterbiev or [Dmitry] Bivol. Let’s see him with a new trainer, and then we can judge,” said Arum.

Light heavyweight contender Anthony Yarde (18-1, 17 KOs) might be a lost cause, because he’s not likely going to switch trainers at this juncture of his career. Yarde has been with Tunde Ajayi since his amateur days, and he’s not going to move on. The best outcome for Yarde is for him to listen to the advice around him to get more experience fighting the top contenders before he fights for another world title.