Tyson Fury to fight Otto Wallin on Sept.14 on ESPN+ 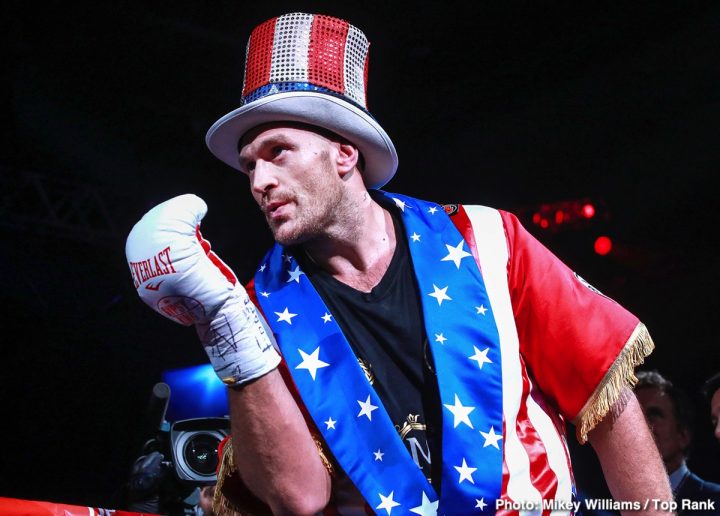 By Charles Brun: Lineal heavyweight champion Tyson Fury and unbeaten contender Otto Wallin have agreed to terms for a fight on September 14 on ESPN+ at the MGM Grand in Las Vegas, Nevada. Fury’s promoters at Top Rank Boxing were interested in matching him against an American heavyweight in former IBF champion Charles Martin, but he reportedly turned down the fight.

Before selecting the 6’5″ Swedish heavyweight Wallin for Fury’s September 14th fight, Top Rank was considering Junior Fa and Johann ‘Reptile’ Duhaupas for him to fight.

“I think it’s great Tyson Fury wants to get right back in the ring and stay active,” said Top Rank vice president Carl Moretti to ESPN.com. “It’s something uncommon nowadays. The paperwork is being drafted, but there is an agreement.”

If Fury beats the 6’5″ Wallin, it would put him in position to face WBC champion Deontay Wilder in a rematch in early 2020. Wilder (41-0-1, 40 KOs) must win his next fight against Luis ‘King Kong’ Ortiz in a rematch on November 9. Fury seems to be taking the easy path to the rematch with Wilder by facing soft opposition in Tom Schwarz and Otto Wallin in order to keep from getting beaten.

Duhaupas (37-5, 24 KOs) lost to WBC heavyweight champion Deontay Wilder by an 11th round knockout in 2015. The 38-year-old Duhaupas has since suffered losses to Alexander Povetkin and Jarrell ‘Big Baby’ Miller. Duhaupas hasn’t fought in 16 months, which is probably why he wasn’t selected by Top Rank.

Wallin (20-0, 13 KOs) is a popular heavyweight in his native Sweden, but he’s an unanimous with the U.S casual boxing fans. He turned pro in 2013, and he’s faced largely journeyman level opposition. The best name’s on Wallin’s six-year pro career are these fighters:

For boxing fans familiar with the sport, those fighters are journeyman level guys. Granat (15-2, 14 KOs) was at top contender for a while, but not anymore. He’s lost two out of his last three fights in defeats to Wallin and Alexander Povetkin.

“Tyson Fury and Otto Wallin have agreed to terms for a September fight on ESPN+. Wallin was a top amateur in Sweden and debuted on Showtime in April. Wallin was also considered for the Anthony Joshua assignment on June 1,” said @MikeCoppinger.

Otto Wallin is a strange choice for Fury

The choice of Wallin is an odd one for the 6’9″ Fury by his promoters at Top Rank, because they reportedly wanted to match him against an American heavyweight in his next fight in order to increase interest in his matches in the U.S. Top Rank is trying to turn Fury, 30, into a household name with the American casual boxing fans so that they can make his rematch against WBC champion Wilder a huge pay-per-view event.

Unfortunately for Fury, Top Rank is going about turning him into a star in a peculiar way by matching him against European heavyweights with unbeaten records filled with wins over fluff opponents. In Fury’s last fight, he defeated unbeaten #2 WBO German heavyweight Tom Schwarz by a second round knockout on June 15 in Las Vegas, Nevada. Schwarz (24-1, 16 KOs) came into the fight with Fury with the same poor resume of no names as Otto Wallin. Never the less, the World Boxing Organization had Schwarz ranked #2 with their organization. Schwarz was no competition for Fury in losing quickly by a second round knockout.

If the idea was for Top Rank to turn Fury into a big attraction in Gemany or Sweden, then their decision to match him against Schwarz and Wallin would make sense. What doesn’t make sense is for Top Rank to be signing Fury to fight those guys in the U.S in front of audiences that have never seen or heard o those guys. At this point, Top Rank and ESPN are wasting the money that they’re paying Fury, because they would have been better off if they’d let him fight Wilder last May, and gotten it over with.

Most boxing fans feel that Wilder would have finished the job that he started last December when he flattened Fury in the 12th round. Fury was unconscious on the canvas after Wilder nailed him with a beautiful right-left combination. In an odd move, the referee gave a count to the knocked out Fury. Some fans believe that was a long count. After the severity of Fury’s knock down against Wilder, it’s not surprising that Top Rank wasn’t eager to put the British heavyweight back into the ring the American knockout artist.