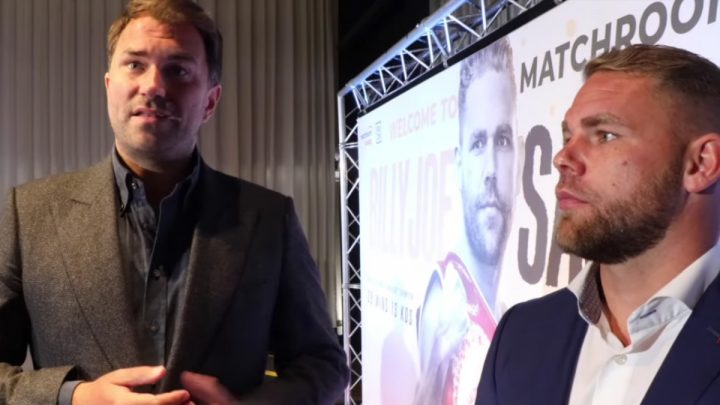 By Charles Brun: Billy Joe Saunders has signed with promoter Eddie Hearn and Matchroom to a multi-fight promotional contact that could see him finally achieve stardom at age 29.  Saunders (28-0, 13 KOs) recently left longtime promoter Frank Warren in search for greener pastures against the big names in boxing. It’s Hearn’s job now to try and deliver the big fights that have been elusive to Saunders his entire 10-year pro career.

Hearn is planning on matching Saunders against these fighters:

The unbeaten WBO super middleweight champion Saunders’ fights will be shown on DAZN in the U.S, and on Sky Sports in the UK. Hearn says he wants to increase Saunders’ profile in the United States straightaway starting with a fight in October or November a top 15 opponent. Staying healthy is a must for Saunders.

“Billy believed he needed to be with us to land the big fights,” said Hearn to IFL TV about Saunders signing with Matchroom. “I’ve just got to deliver those fights, but when you’ve got a guy that will fight anyone, it’s very easy to do. In the past, people looked at Billy Joe and said, ‘he’s not really a big name. He’s not a big profile fighter.’ Golden Boy saw him against David Lemieux [and lost interest in matching him against Canelo Alvarez]. I turned it on. It was unbelievable. After five rounds, Lemieux gave up. In the Andy Lee fight, and mainly in the Lemieux fight, I thought, ‘this guy can really fight,'” said Hearn.

It may be easier said than done for Hearn to match Saunders against Canelo Alvarez or Golovkin. Those two are looking at other guys right now, and not likely to want to mix it up against a crafty southpaw like Saunders. Canelo is interested in fighting WBO light heavyweight champion Sergey Kovalev later this year. As for Golovkin, he’s fighting Sergiy Derevyanchenko on October 5 for the vacant IBF middleweight title at Madison Square Garden in New York.

If Golovkin wins that fight, he’s going to be looking to exert pressure on DAZN for the trilogy contest against Canelo Alvarez for May 2020. Saunders brings nothing to Golovkin, because the casual boxing fans have never heard of him. Moreover, Saunders was too defensive in his signature career victory over former IBF middleweight champion David Lemieux in 2017.

NEWS:   Anthony Dirrell another option for Canelo Alvarez's next fight

Saunders to fight in October or November in U.S

“He wants to be in the deep end with the sharks,” said Hearn about Saunders. “Probably the end of October [in the United States for Saunders’ debut with Matchroom]. Now my job is to go after all the names I mentioned at the press conference. Is there a chance to make those fights this year? The key is action. The key is to give him dates as soon as possible, increase his profile, and make sure those major fights will happen. In 2020, only major fights for Billy Joe. If we have to have a top 15 guy at the end of October or November, that’s okay, but will be the last one ever. And there will be a reason behind that, and that’s to give him a profile [in the U.S] fight, and get him active and make sure he’s ready for all those guys,” said Hearn.

A good name for Hearn to be targeting for Saunders would be former WBC super middleweight champion David Benavidez. That’s a young gun in the 168 pound division with heavy hands. Benavidez is challenging WBC super middleweight champion Anthony Dirrell on September 28 on the Errol Spence Jr. vs. Shawn Porter undercard on Fox Sports Pay-Per-View. If Benavidez wins the World Boxing Council 168 pound title from Dirrell, he’d be a great option for Saunders to face. Another great fight for Saunders at 168 is WBA champ Callum Smith. However, Hearn says he wants to let that match-up marinate a little before he sticks them in with each other in 2020.

“It’s got to be Canelo, because [Floyd] Mayweather is the only man to beat him,” said Saunders in giving his preference for who he wants to fight. “Being the second man behind Mayweather isn’t a bad status to be in boxing. I know I can beat him, as long as it’s fair, and I don’t want those weight clauses and rubbish. Yeah, I want it to be fair, and I don’t want him to be four rounds up when we start. I want an even playing field, and I know I’ll beat him.

I moved up to fight [Gilberto] Ramirez, because there was no one at 160 that wanted to fight me. When the Ramirez chance happened, I thought I’d fight him, but then he vacated, and then [Shefat] Isufi stepped in. It wasn’t ideal, but you can only fight who they put in front of you. If it meant moving up to 175, I would have done it for a big fight just to prove myself. I’m sure now that I’m on DAZN, this man [Hearn] will talk and get those fights [Canelo, Golovkin, Chris Eubank Jr. and Callum Smith] going. I’ll use him as warm-up,” said Saunders about Chris Eubank Jr.

Of the two fighters in boxing, Canelo is likely out of reach for Saunders for the time being. Golden Boy Promotions is said to have been turned off by how Saunders fought in his victory over Lemieux two years ago. They’re not going to want to put the 5’8″ Canelo in with a slick bigger fighter like Saunders, and watch him struggle. It would be in Saunders’ best interest to change his fighting style a little by focusing on being more stationary. Right now, Saunders moves too much, and he’s too defensive to attract the likes of Canelo and Golovkin to fight him. Saunders is viewed by some as the super middleweight division’s version of Demetrius Andrade, and that’s a guy that has attracted zero interest from Canelo and Golovkin.

“I’m speaking to these people and their teams,” said Hearn about Golden Boy Promotions. “Billy has been mentioned for Canelo. Don’t even rule that fight out for later in the year. I know he [Canelo] wants to fight [Sergey] Kovalev, but what happens if Kovalev loses [to Anthony Yarde on August 24] or if Yarde gets injured? He’s going to be looking for an opponent. Billy is like, ‘I’ll fight him, no problem.’ He wants all those fights now. ‘Stick me with him in November.’ Golovkin is going to fight [Sergey] Derevyanchenko in October for the IBF middleweight world title. There’s another fight [for Saunders].

Danny Jacobs is a great fight at 160 or 168. Callum Smith is a natural fight. Possibly, I’d like to see Callum and Billy in a big fight, and then fight each other in a monster rather than in just a big fight in the spring. I feel like I’ve got the top two 168’s in the world. But if Billy turned around to me, and Callum turns around to me and says, ‘Let’s do it now,’ then we’ll sit down and look at the money. But he wants all those fights now,” said Hearn about Saunders.