Ryan Garcia vs. Avery Sparrow on Sept.14 LIVE on DAZN 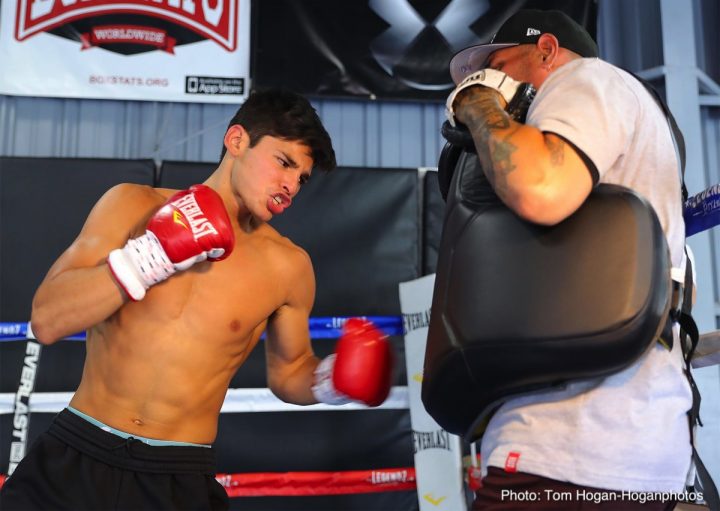 By Dan Ambrose: Ryan Garcia will be taking a step up fight against Avery Sparrow on September 14 LIVE on DAZN in a Golden Boy Promotions card. The fight could take place in Carson, California. There’s still now word whether the unbeaten 20-year-old lightweight contender Garcia (18-0, 15 KOs) will be the headliner on the September 14th card or not.

Ryan wants to fight on his own cards, but he’ll need to start fighting talented opposition for it to make sense. Sparrow (10-1, 3 KOs) is a move in the right direction for the young stork-like 5’10” Garcia for him to become a headliner attraction, but he’s still far from the guys that he needs to be fighting. Garcia needs to be fighting the premier contenders at lightweight like Devin Haney, Teofimo Lopez, Zaur Abdullaev, Masayoshi Nakatani, Jose Pedraza, Jorge Linares or Luke Campbell.

Garcia is built like a bird, and he’s not rugged enough to be put in with the better fighters at lightweight. Ryan is like a younger version of Japanese fighter Nakatani. In other words, Garcia is a limited fighter. You can’t plug him in with any of the talented fighters at lightweight like Vasiliy Lomachenko, Richard Commey, Teofimo or Campbell and expect him to beat them.

Thus far, Ryan hasn’t exhibited the kind of talent needed for him to be put in fights against those type of contenders. Age is not an excuse either for Garcia, because Devin Haney (22-0, 14 KOs) is the same age as him at 20, and he’s being stepped up to fight for the vacant WBO lightweight title against Zaur Abdullaev (11-0, 7 KOs) on September 13. Haney is a stronger, more advanced fighter than Ryan Garcia at this point.

“Sources tell…Ryan Garcia will fight Avery Sparrow of Philadelphia on Sept. 14 in a lightweight bout streamed on DAZN & promoted by Golden Boy. The fight will likely land in Carson, California. Sparrow, coming off a victory over Hank Lundy, is a step-up for Garcia,” said @MikeCoppinger.

Sparrow, 25, recently beat former light welterweight world title challenger Hank Lundy (29-8-1, 14 KOs) by a close 10 round majority decision last March. The scores were 95-93, 96-92, and 94-94.  Lundy is 35-years-old, and not the guy that he used to be. Sparrow’s victory over him has to be seen as a situation where he caught him at the right time, because he would likely lost to a younger Lundy.

“To all my fans, yes I was supposed to fight Romero Duno in Sept; I decided to not go with that bc [because] I wanted to fight him as main event in November, and not be some co-main event on a card that will be driven by me. I also elected to fight the guy that gave Duno problems for Sept!” said Ryan Garcia on his Twitter in complaining about being put in a main event on a Golden Boy card. “The bottom line is, I deserve the right promotion for fights with the full time to promote and not be thrown into a fight and have myself do the whole promotion, knowing my fan base they will tune in no matter what but I deserve to have a full promotion fight with Duno!” said Garcia.

Golden Boy Promotions would have been taking a risk in putting Ryan Garcia as the headline attraction against Romero Duno (20-1, 15 KOs) or Juan Antonio Rodriguez (30-8, 26 KOs). Those are not well known fighters. It would have made sense for Ryan to be in the main event if Golden Boy mad matched him against a top super featherweight or lightweight, but not against journeyman Rodriguez or Duno. Ryan would likely lose to the top 130 and 135 pound contenders. But if Golden Boy wants to give Ryan his wish in having him fight in a main event, they should line him up against Haney, Joseph ‘Jo Jo’ Diaz, Miguel ‘Mickey’ Roman or Yuriorkis Gamboa and see what he can do. It’s very likely Garcia would be trounced by all of those guys, and then he would be upset.