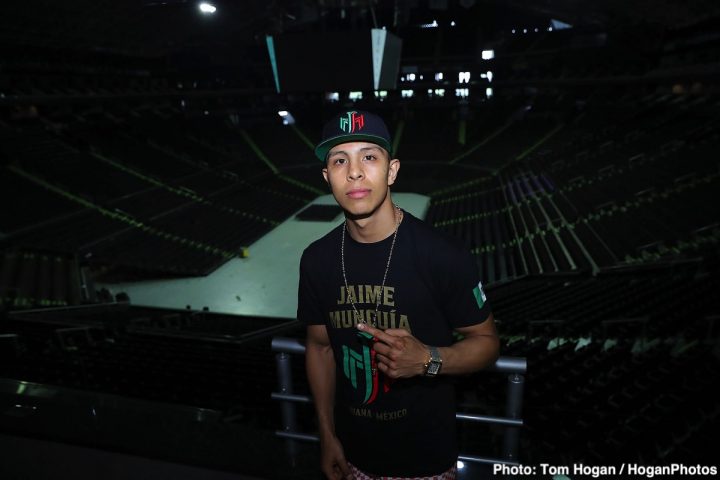 By Dan Ambrose: Jaime Munguia is scheduled to defend his WBO junior middleweight strap against fringe contender Patrick Allotey on September 14. Munguia’s management were originally negotiating a fight against former welterweight champion Jessie Vargas, but they couldn’t agree to a deal.

According to Mike Coppinger, Team Munguia (33-0, 26 KOs) wanted the fight with Vargas 29-2-2, 11 KOs) to take place at a 156 pound catchweight rather than at 154. This means that if Vargas had won the fight, he wouldn’t be the new WBO champion.  It’s not a surprise the fight didn’t get made. It would have been a bad deal for Vargas. He would probably lost anyway, but he had nothing to gain if he did win. Vargas is another Sadam Ali though. The same type of non-puncher, and close to the same talent.

Munguia will now be defending against Allotey (40-3, 30 KOs) at the normal 154 pound weight limit for the division. In other words, Munguia and his team were okay with fighting Allotey at 154, but wanted 156 pound catchweight for Vargas fight.

Vargas had fought just once at junior middleweight

It doesn’t make a lot of sense for Munguia needing a catchweight of 156 pounds to fight a welterweight. In Vargas’ last fight, he moved up to 154 in a contest against Humberto Soto last April. The fight took place at a catchweight of 150 pounds.

Munguia, 22, shouldn’t need to fight at a catchweight against a guy with little size or power in Vargas. If this was Golden Boy Promotions’ idea for Munguia to face Vargas at a 156 pound catchweight, it makes you wonder. Do they have confidence in Munguia?

The timing of this coming right after Munguia’s controversial 12 round decision win over Dennis Hogan looks bad. Munguia beat Hogan by a highly questionable majority decision last April in Monterrey, Mexico. A lot of boxing fans had Hogan winning that fight. They expected that Munguia would do the right thing and give Hogan a rematch, but that’s not happening.

Munguia would been the favorite over Vargas

Vargas’ lack of size and punching power would have had him the underdog against Munguia. It doesn’t matter if the fight took place at 154. Munguia is too huge and powerful for a finesse guy like Vargas, who has a KO percentage of 33. Vargas stopped 39-year-old Humberto Soto in the sixth round last April, but he had huge advantage over him. Soto has spent much of his career at super featherweight. As such, he was too small and old for Vargas. Munguia needs to move up to 160 already.