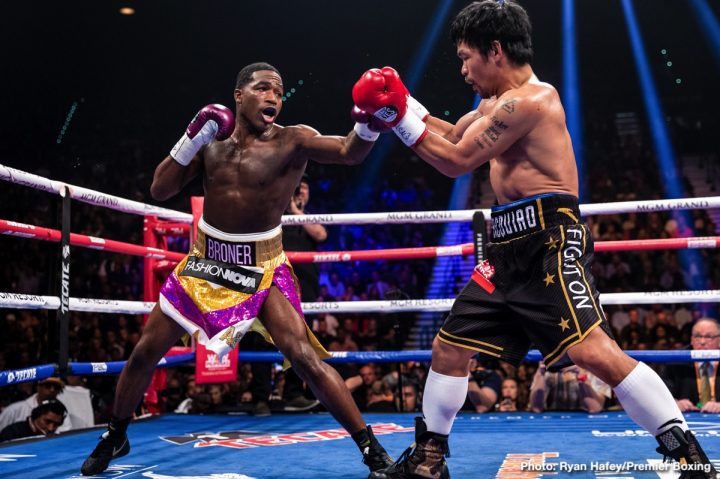 By Mike Smith: Adrien Broner has announced his retirement from boxing on his social media account. Using a lot of slang that’s difficult to decipher, Broner says he’ll take a “brick” and turn it into “eight.” Broner (33-4-1, 24 KOs) can still make a lot of money in boxing as a B-side opponent for the top level fighters with PBC. There’s no need for Broner to be selling bricks, whatever that is.

The 30-year-old Broner hasn’t won a fight in two years, and is coming off of a defeat to Manny Pacquiao last January. Broner recently gloated after seeing Keith Thurman lose to Pacquiao, because he felt he did a better job against the Filipino star.

It’s unclear where this leaves Ivan Redkach. Broner is supposed to be facing the 33-year-old Ukrainian Redkach (23-4-1, 18 KOs) in October. If Broner is retiring, then the southpaw Redkach will need to look for another opponent. You have to feel sorry for Redkach, because he was looking forward to fighting Broner. This was a winnable fight for Redkach, and it would have left Broner with no choice but to retire.

Some feel that former four division world champion Broner isn’t willing to put in the hard work in boxing for him to excel. Earlier in Broner’s career, he used his size advantage to win world titles against weak opposition at 130 and 135. He won his world titles against Vicente Martin Rodriguez and Antonio DeMarco. At 140, Broner defeated Khabib Allakhverdiev to win a world title. Broner beat Paulie Malignaggi to capture a world title at 147.

Is Broner crying wolf in talking about retiring?

This isn’t the first time that Broner has talented of wanting to retire from boxing. He’s done this before, but he continued to fight. It’s possible that Broner’s motive for talking of retirement now is to get attention from the fans to focus on him. In a video this week, Broner said he made eight figures for his fight with Manny Pacquiao.

There aren’t many jobs on the market where a person can make eight figures. That’s why it seems so unlikely that Broner is serious with his retirement talk. Earning eight figures as the B-side opponent for superstars is a soft life. The only thing Broner needs to do is trash talk a little, and he gets his money. Is Broner trying to get attention from the fans by talking about retirement? This is a poor way for Broner to try and attract attention on himself. If Broner keeps talking retirement without doing it, the fans are going to ignore his drama.

Adrien still has options with his career

A rematch between Broner and Marcos Maidana would be a fight that a lot of boxing fans would find appealing. As far as the top welterweights, Broner could face Danny Garcia, Terence Crawford or Keith Thurman. Errol Spence would also be an option. There would be a lot of criticism from boxing fans if any of those guys face Broner at this point, because he’s been win-less since 2017. The casual fans would still tune in to see Broner fight those guys. Broner’s trash talking is what’s keeping his career afloat, because he no longer possesses the physical skills to compete against the best. In Broner’s 12 round decision loss to Pacquiao, he lost by the scores 116-112, 116-112 and 117-111. Pacquiao is 40-years-old, and fans expected more from Broner than what he showed.