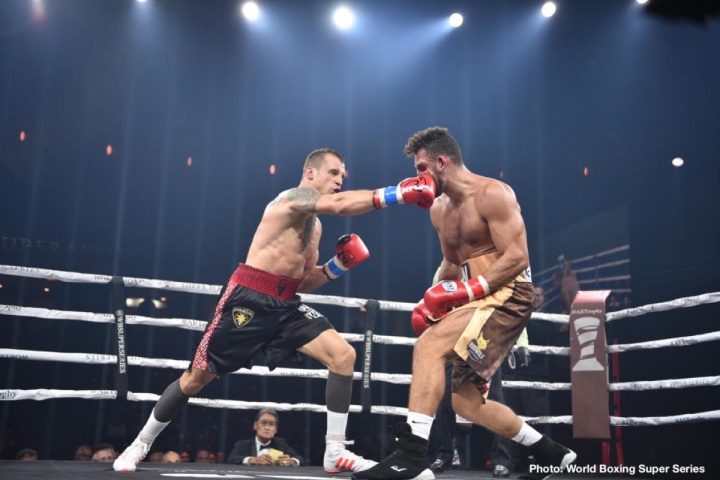 By Sean Jones:  IBF cruiserweight champion Yunier Dorticos (24-1, 22 KOs) and WBO champion Mairis Briedis (26-1, 19 KOs) will be meeting in the final of the World Boxing Super Series tournament on December 14 in Riga, Latvia, according to ESPN. The final could take place at the Arena Riga, which is where the semifinal was staged.

Briedis, 34, recently defeated Krzysztof Glowacki by a third round knockout on June 15 in their semifinal fight. Glowacki fouled Briedis with rabbit punches. Briedis responded by battering Glowacki. In the second round, Briedis elbowed Glowacki, and had a point deducted.

There are some boxing fans that felt that Briedis should have been disqualified for the elbow that he threw that hurt Glowacki. One hopes that the Briedis vs. Dorticos fight is foul-free, because it would be a disappointment if there fight turns into an ugly fouling contest.

Dorticos won his semifinal fight in the WBSS tournament in stopping previously unbeaten Andrew Tabiti (17-1, 13 KOs) in round 10 on June 15 in Riga, Latvia. The fight was suppose to have been a competitive affair, but the Cuban fighter Dorticos’ power was too much.

The WBSS light welterweight final between WBA champion Regis Prograis and IBF champ Josh Taylor is currently in bad shape. Prograis (24-0, 20 KOs) has pulled out of the tournament, and has filed a lawsuit against the WBSS organizer Comosa AG. It’s unknown whether that fight will still take place. There was talk of it happening in October, but it might not take place at all now.

This fight was expected to be the most exciting of the 140 pound tournament, but it’s unfortunate it’s off. Taylor’s boxing fans believe that Prograis pulled out of the fight because he was afraid.

Inoue (18-0, 16 KOs) has looked great in the WBSS tournament. In his two fights in the tournament, he’s knocked out Juan Carlos Payano in the first round, and Emmanuel Rodriguez in the second. Neither of those fighters possessed the punching power, experience and talent of Donaire. Nonito has looked equally impressive in the WBSS tournament in beating Stephon Young and Ryan Burnett. Now that Donaire is back at 118, his punching power is more devastating than it was at 122 and 126. Donaire will need to land his bombs on Inoue before the Japanese fighter connects with his big shots. This fight could down to which guy lands their power shots first.