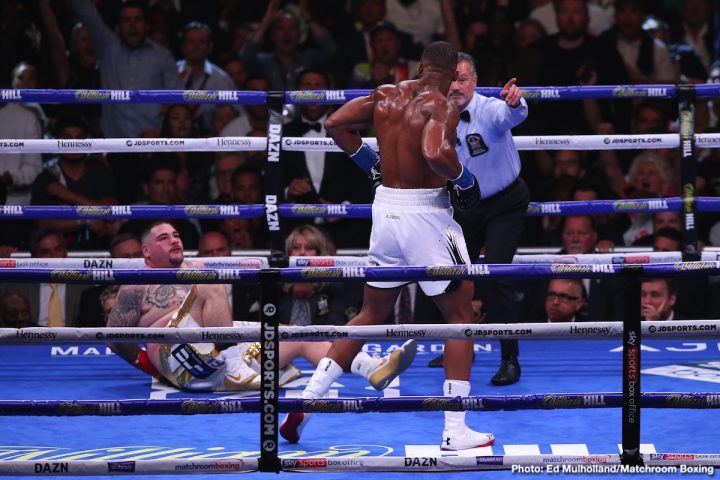 By Doug Berman: Trainer Peter Fury believes that Anthony Joshua (22-1, 21 KOs) can beat Andy Ruiz Jr. in their December 7 rematch if he ties him up frequently, and uses movement to keep him on the outside. It’s no secret that Joshua, 29, failed to use his size in his first fight with Ruiz, and it cost him dearly.

Fury wants Joshua to fight Ruiz the same way that he fought Joseph Parker last year. Joshua stayed on the outside, used his jab and tied Parker up all night win a one-sided 12 round decision in Cardiff. After the bout, many boxing fans compared Joshua’s fighting style to a young Wladimir Klitschko. But for some reason, Joshua abandoned the new style, and went back to his normal brawling form in his subsequent fight against Alexander Povetkin and Ruiz. It’s interesting to note that Joshua was hurt in both of those fights.

The 6’6″ Joshua has a big height and reach advantage over the 6’2″ Ruiz Jr. (33-1, 22 KOs) that he failed to utilize in their first fight two months ago on June 1. Peter would like to see Joshua employ his size advantage to keep his shorter opponent on the outside where he’ll be harmless to him.

Joshua-Ruiz will be fighting on December 7 in Saudi Arabia.

Joshua must use height to beat Ruiz says Peter Fury

“Use your height, use your boxing. Stop going around in a circle like that, when all your body is totally still. Get some lateral movement,” said Peter Fury to skysports.com in giving advice to Joshua to beat Ruiz.  “Get on your jab. Be loose. That’s all he needs to do, and [Ruiz Jr] will tire out…With the power of AJ, if he starts catching him with long shots on the way in, ties him up, uses his weight, he’ll win the fight,” said Peter.

Peter could be on to something in advising Joshua to clinch, jab, and move to beat Ruiz. It’s worked for Hughie Fury in turning him into a top tier heavyweight, and he’s not a puncher by any means. Joshua must keep Ruiz off of him to win, and the best way of doing that is to box.

Joshua tied up Parker frequently in their fight last year, and he didn’t allow him to get more than a few shots off when he was in range. Parker looked frustrated by the 9th round, and he had no answers to the tactics that Joshua used. It was a masterful performance by Joshua.

“He could get a late stoppage or easily on points,” said Peter Fury about Joshua. “He’s only got to keep turning him and keep him on that long jab, keep tying him up, and he’ll win it, landslide it. Same way as he fought Parker. If he does that, repeats that, he’s winning it,” said Peter.