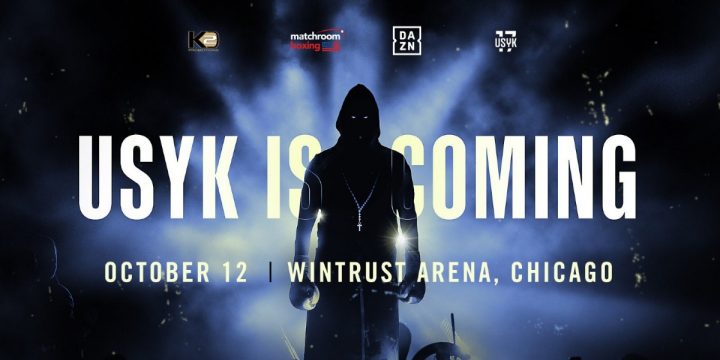 By Kenneth Friedman: Oleksandr Usyk (16-0, 12 KOs) will fight on October 12 against possibly Andrey Fedosov (31-3, 25 KOs). The 33-year-old Fedosov has accepted an offer to face Usyk, according to K2 promoter Alex Krassyuk @UA_Boxing. However, there are still other heavyweights in the running for Usyk’s next fight; one of them being former world title challenger Carlos Takam. It’s not a done deal that Usyk will be facing Fedosov.

Eddie Hearn of Matchroom wants the 38-year-old Takam (36-5-1, 28 KOs). He had previously been scheduled to face Usyk on May 25 in Oxon Hill, Maryland. The fight was wiped out when Usyk suffered a biceps injury while training. He had to pull out of the fight. Takam recently signed with Star Boxing in the U.S.

It’s unclear whether that promotional company will want to throw Takam in with a fighter like Usyk straightaway after signing him. At this point in Takam’s career, he’s needs some confidence boosters, as he’s been knocked out in two out of his last three fights. It could be a mistake if Takam is put in with a tricky fighter like Usyk given his recent losses to Anthony Joshua and Dereck Chisora.

Fedosov an excellent choice for Usyk

The 33-year-old Fedosov is a solid fighter with with past wins over these fighters:

Dawejko is a fighter that was rumored to have knocked down Anthony Joshua in sparring while he was preparing for his fight with Andy Ruiz Jr. on June 1.  Fedosov beat Dawejko by a one-sided 10 round unanimous decision in his last fight in October 2018.

The positives about Usyk fighting Fedosov:

🇺🇦 Oleksandr Usyk’s K2 promoter Alex Krassyuk has confirmed that Andrey Fedosov has accepted an offer to face Usyk on his heavyweight debut, Oct 12th in Chicago. However, he insisted they’re still considering other options, including Carlos Takam. Decision this week. [@UA_Boxing]

The negatives about Usyk facing Fedosov: