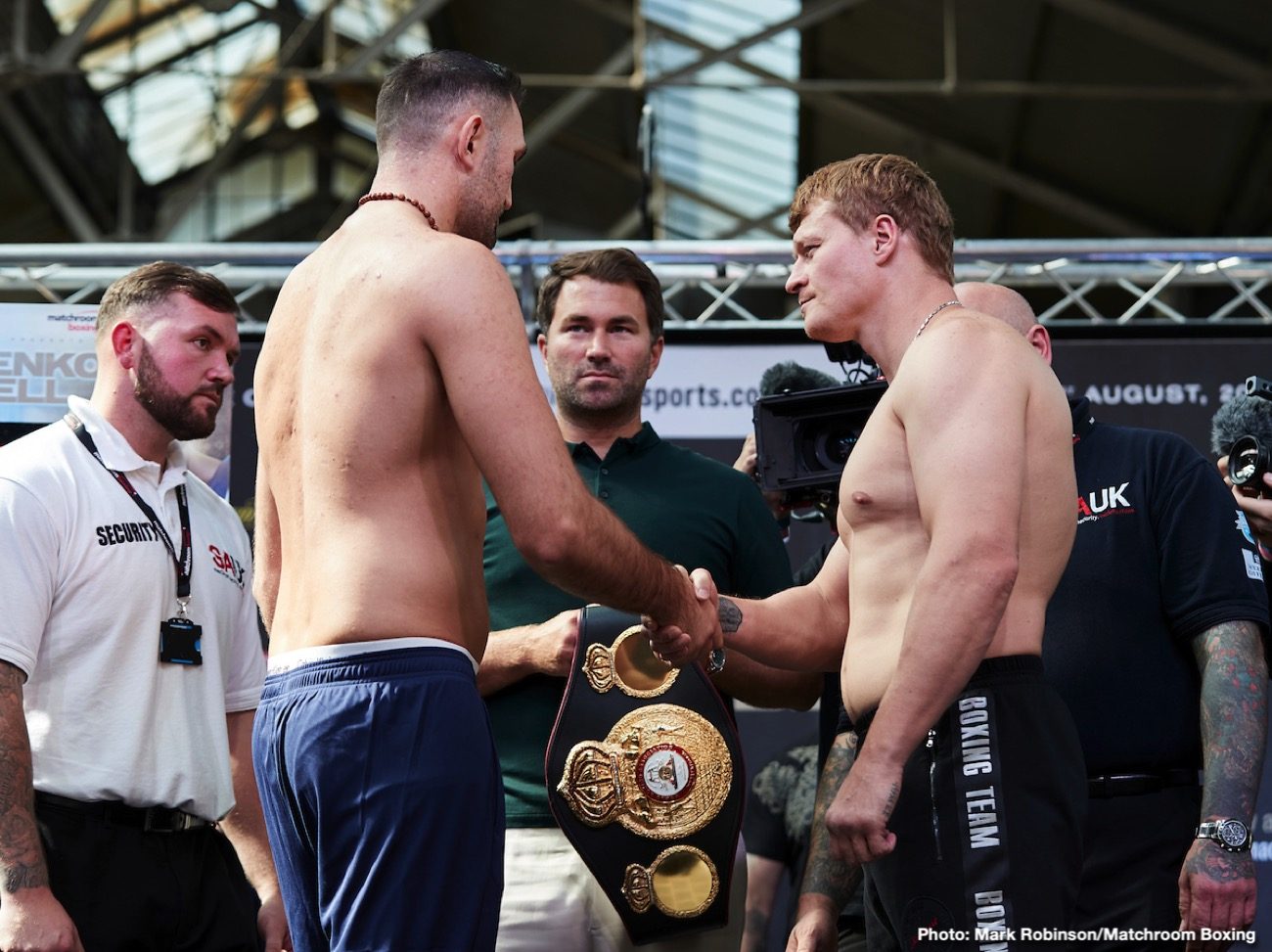 By Barry Holbrook: Former WBA heavyweight champion Alexander Povetkin (34-2, 24 KOs) is fighting Hughie Fury (23-2, 13 KOs) tonight at the O2 Arena in London, England, live on ESPN+. This is a contest that most would have viewed as a horrible mismatch if it had taken place 3 to 6 years ago when Povetkin was still in his prime. He’s now 39, and coming off of an 11-month layoff, and a stoppage loss to Anthony Joshua last September.

What’s interesting about the young 24-year-old Hughie is he’s consistently taking on tougher opposition than his cousin lineal heavyweight champion Tyson Fury.  Since 2017, Hughie has fought Kubrat Pulev and Joseph Parker. Now he’s about to fight a top 7 fighter in Povetkin.

In contrast, Tyson fought Tom Schwarz in his last fight, and now he’s facing Otto Wallin. there’s no comparison between Tyson and Hughie in terms of the competition. Hughie is showing more willingness to face guys that can potentially beat him than Tyson is right now. Unlike Tyson, Hughie hasn’t tasted the big money yet during his career. He’s hungry, and he wants to make the big money like Tyson is. As such, Hughie is still ambitious, and willing to fight the best. The money that Top Rank is paying Tyson seems to have made him content, and not satisfied with facing low level opposition like Wallin and Schwarz.

“You will see something different. I believe I can stop Alexander Povetkin,” said Fury to IFL TV.

That would be something if the 6’6″ Hughie knocks out Povetkin, because he’s only been stopped once in his career. Hughie has the size to KO Povetkin, but he needs to mix it up to do it. The way that Hughie has fought most of his career, he doesn’t trade often enough with his power shots, and he gets behind in his fights. Hughie does well against domestic level opposition, but he’s not proven that he can beat top 10 level fighters. Kubrat Pulev and Joseph Parker both dominated Hughie in winning comfortable 12 round decisions.

“Povetkin hasn’t fought since losing to Anthony Joshua which does play into Fury’s hands. Hughie is a good fighter and his losses have only come up against good fighters. If Fury is on form he should definitely win,” said former super middleweight champion George Groves to skysports.com. “The Russian is another good fighter, of course – he has the heavyweight size, boxing ability and experience, but is he now just that bit too long in the tooth?”

Groves is onto something in asking whether Povetkin is a “long in the tooth.” He’s looked old in his last four fights against Joshua, David Price, Christian Hammer and Andrey Rudenko. It was an overnight transformation for Povetkin. He went from looking great against Johann Duhaupas in December 2016 to looking pedestrian in every fight since.

We’re just hours away. @hughiefury vs Alexander Povetkin. A heavyweight clash not to be missed.

📺 Catch in on the undercard of #LomachenkoCampbell on @SkySports Box Office. pic.twitter.com/TzGXAAhxZs

Hughie bulked up for Povetkin fight

Fury put on six pounds in coming in at 224 pounds for the Povetkin fight, and he’s counting on that extra weight to help him in the power department. In Hughie’s last fight, he weighed just 218-lbs for his fight against former WBC heavyweight champion Samuel Peter on July 12. Although Hughie won by a 7th round knockout, he was taking punishment from the 38-year-old Peter when the two exchanged.

Fury has been heavier in the past, but he’s now shown any kind of punching power. It’s not realistic to assume that Hughie will suddenly transform himself into a huge puncher overnight, but he may not need to. He’s got an old fighter in front of him in Povetkin, and he’s got the size and youth advantage. Povetkin looked like a cruiserweight in his last fight against Joshua, and he really doesn’t have the size for this division.