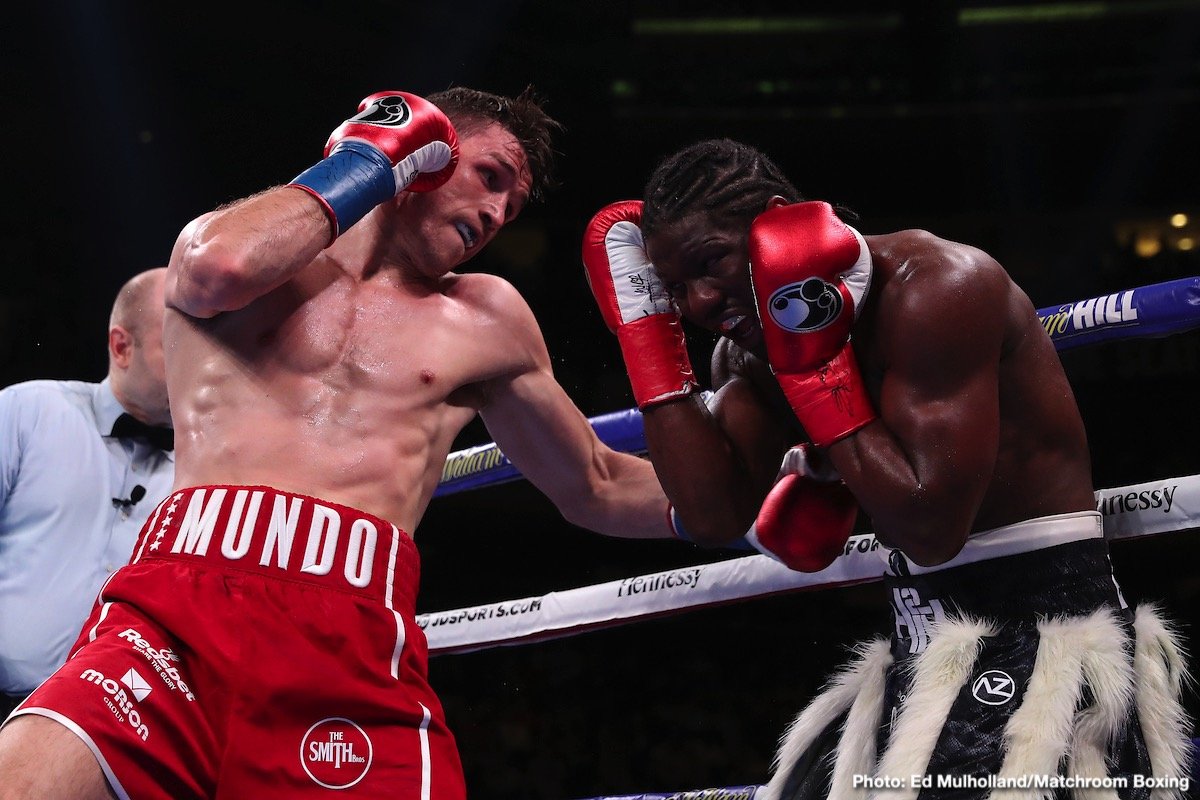 By Charles Brun: Callum Smith has been ordered by the WBA to start negotiations for a title defense against #1 mandatory John ‘The Gorilla’ Ryder for his World Boxing Association Super World 168-lb title. The negotiation period starts immediately, and the two have until September 29 before a purse bid is ordered.

Ryder (28-4, 16 KOs) is essentially a stay busy fight for Smith, as he’s not expected to be a threat. The 31-year-old Ryder has won his last four fights since losing to Rocky Fielding by a 12 round split decision in April 2017. Losing to Fielding pretty much lets you know where Ryder is in terms of talent or lack thereof. Ryder also has past losses to these fighters:

Pressure off Hearn to find Callum a good opponent

This is a lucky break for Matchroom promoter Eddie Hearn, because he’s off the hook for now in needing to find a quality opponent for Smith (26-0, 19 KOs) to defend against. Hearn has been criticized by fans for his failure to setup fights for Callum against the elite level fighters at 160 and 168. Although Hearn has a done a lot of talking about fights he wants to put Smith in, he’s not been able to set any of the fights up. He mentions Gennady Golovkin, Saul Canelo and Alvarez and Billy Joe Saunders as guys he wants to put in with Saunders, but he’s not been able to get any of those fights for him.

Smith recently received some offers from rival promoters to sign him to their stable. Hearn is aware of those offers, and yet he feels confident that he’ll be able to deliver big fights to Callum against Saunders, GGG and Canelo. Unfortunately, the only guy among those three that will likely end up facing Smith is Saunders, and the reason he’d be doing it is he doesn’t have great options for fights.

Ryder doesn’t have much of a shot at beating Smith, because he’s too much of a slugger, and he’s got zero power and size. At 5’9″, Ryder is too small to be fighting at 168, and definitely way too tiny to be mixing it up with the 6’3″ Smith for any length of time.

Callum needs to get this over with quickly

Smith shouldn’t let Ryder hang around for too long, because he’s going to look bad if he’s forced to break a sweat against this guy. Ryder would be easy work for the talented fighters at 168 like Caleb Plant and Davis Benavidez. That’s why it’s important that Smith show that he can get rid of this guy quickly, and send a message to the WBA to start ranking quality fighters for a change. Ryder is too low level to be fighting for a world title. In Ryder’s recent fights, he’s beaten Bilal Akkawy, Andrey Sirotkin, Patrick Nielsen and Jamie Cox. Before that, he lost to Rocky Fielding. That’s a guy that Smith knocked out in the 1st round in 2015.