Gennady Golovkin has agreed to terms to face Sergiy Derevyanchenko on Oct.5 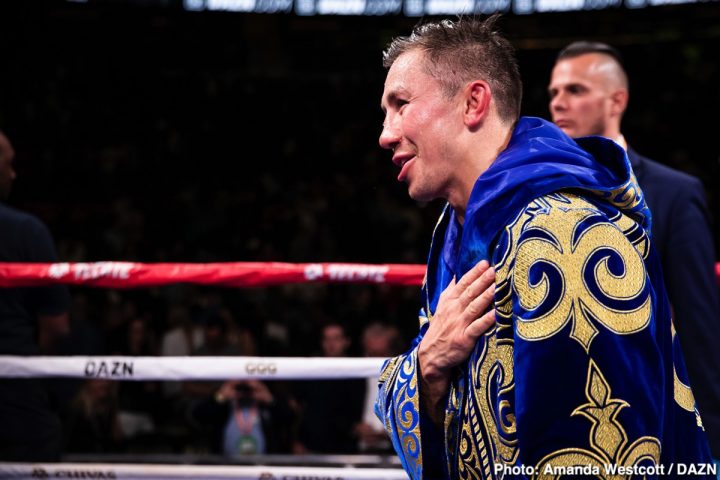 By Dan Ambrose: Former IBF/WBA/WBC middleweight champion Gennady ‘GGG’ Golovkin has agreed to terms for a fight against #1 IBF Sergiy Derevyanchenko on October 5 on DAZN at Madison Square Garden in New York.  Derevyanchenko’s advisers Al Haymon and Keith Connolly still need to give the green light, according to @MikeCoppinger. As soon as they give Derevyanchenko, 33, the go ahead, he and Golovkin will get the fight official for the 5th of October in New York.

Golovkin (39-1-1, 35 KOs) and 2008 Olympian Derevyanchenko (13-1, 10 KOs) will be fighting for the vacant International Boxing federation middleweight title. The belt in itself isn’t that important. What’s important is what the strap can lead to, and that’s potentially a big money fight against WBA/WBC 160 pound champion Saul Canelo Alvarez.

GGG vs. Derevyanchenko = a real war

This fight could be a real barn-burner from start to finish if Derevyanchenko comes to fight. He normally goes on the attack in his fight, but in this case he might not want to trade shots. Golovkin is too powerful, and he’ll give a good chance of destroying the Ukrainian.

The hand speed between the two fighters is roughly the same. Golovkin, 37, won’t need to worry about being countered all night long by Derevyanchenko like he did in his loss last September to Canelo Alvarez. Derevyanchenko isn’t that type of fighter. Even if Derevyanchenko were a counter puncher, he would be at the mercy of Golovkin when he returned fire.

Derevyanchenko just had a fight against Canelo slip through his fingers.  His management team were unable to put together a fight against the superstar. Canelo was none too pleased that his promoters at Golden Boy were unable to iron out a deal. It cost him his IBF title. The sanctioning body stripped Canelo of his valuable belt when Golden Boy missed the deadline to get the deal done, because they couldn’t agree on terms.

Sources: GGG has agreed to terms to meet Sergiy Derevyanchenko in a middleweight title tilt Oct. 5 at MSG on DAZN. Derevyanchenko advisors Keith Connolly and Al Haymon haven’t signed off yet, but once they do, Golovkin will be positioned to regain IBF title he lost to Canelo

Golovkin has a chance to win back his IBF title

Derevyanchenko getting another title shot

The IBF is letting Derevyanchenko get another shot at their middleweight title despite his loss last October to Daniel Jacobs. Derevyanchenko fought Jacobs for the vacant IBF title, and lost by a 12 round split decision. The IBF then let Derevyanchenko immediately fight Jack Culcay last April in an official title eliminator, and he beat him by a 12 round decision. So, Derevyanchenko gets another chance. If Golovkin beats Derevanchenko soundly, it could get interesting to see how long it takes for him to work his way back to yet another title shot with the IBF.