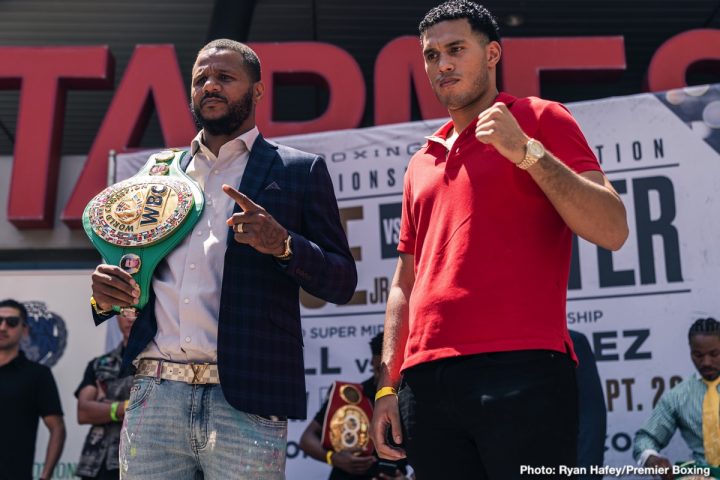 By Allan Fox: IBF welterweight champion Errol Spence Jr. says he’s going to be on his guard ready for “dirty” WBC champion Shawn Porter when or if he resorts to his fouling when they face each other next month on September 28 on Fox Sports Pay-Per-View. Spence (25-0, 21 KOs) says Porter has two sides to him.

Outside of the ring, Porter is a perfect “gentleman,” says Spence, but inside the ring, he’s a “dirty fighter.” Spence says he’s going to be ready to respond to Porter (30-2-1, 17 KOs) if he starts with his dirty tactics. Errol notes that Porter fights dirty when fight isn’t going well for him.

Spence and Porter will fighting in a unification match on the 28th of September at the Staples Center in Los Angeles, California. The FOX Sports PBC Pay-Per-View card starts at 9:00 p.m. ET/6:00 p.m. PT. The winner of the Spence-Porter unification fight could face WBA Super World welterweight champion Manny Pacquiao, who is coming off of a big win over Keith ‘One Time’ Thurman last July.

Errol to keep an eye on Porter’s dirty tactics

The thing with Porter, 31, is he doesn’t always use dirty tactics in his fights. Against Yordenis Ugas, Adrien Broner and Adrian Granados, Porter fought a clean fight without fouling. But against Paulie Malignaggi, Andre Berto and Danny Garcia, Porter came forward head first and roughed those guys up. Spence’s theory is Porter resorts to fight dirty when a fight isn’t going well for him, but the history doesn’t bare that out. Porter dominated Malignaggi and Berto from the start, but he still roughed them up. It’s possible that Porter saw weakness in those fighters that made him believe he could rough them up without being fouled in return.

“I have knockout of guys,” said Spence in addressing the criticism from boxing fan that he failed to knockout Mikey Garcia. “Keith Thurman didn’t knockout [Leonard] Bundu. I knocked out Bundu. [Manny] Pacquiao knocked down Chris Algieri seven times, but couldn’t finish him. I finished him. I knocked out [Phil Lo Greco]. Shawn Porter could’t knockout Lo Greco. So there are a lot of guys that they couldn’t knockout, that I knocked out. I’m not worried about it. I do have the power.

I can knockout somebody if I wanted to. The Mikey Garcia fight wasn’t just about whether I’d knock him out. It was me showing my skill-set, and my ability. I do have a skill-set that everybody was doubting that I had, and that [they were saying that] Mikey Garcia had a better skill-set. It’s not really important to me,” said Spence.

If Spence wants to avoid being on the receiving end of a controversial decision in the future, he’s going to need to focus on knocking out his opponents. Spence boxed Mikey Garcia in beating him by a 12 round decision last March. Although Spence got the decision, he didn’t win a new boxing fans with his performance.

“I can beat him on the inside or the outside,” said Spence about Porter. “If you watch all of my fights, I do fight on the inside too. I can negate anything he does. I might have to get on the inside and punish him. In my mind, as much as he’s a gentleman outside of the ring, he is a dirty fighter inside the ring. He might do it, and I might respond in a different way. You’ll have to just find out,” said Spence.

If Porter gets desperate, he may choose to rough Spence up in hopes of getting him out of there early. Porter found success in roughing up Malignaggi and Berto to score stoppages. A cut stoppage would anger a lot of boxing fans, because they’ll be paying to see the Spence-Porter fight on Fox PPV. They’re not going to want to see the contest end early with Spence badly cut from an elbow or a head-butt from Porter.

“He’s still there [as a top welterweight],” said Spence about Keith Thurman after his loss to Manny Pacquiao. “I think losses get a knock, because Floyd [Mayweather Jr.] stayed unbeaten for so long, and everybody wants to be undefeated. But basically all the champions did take a loss, especially when you’re fighting one of the top guys in the division like Manny Pacquiao. It was an exciting fight,” said Spence about the Pacquiao vs. Thurman fight last July. “He [Thurman] lost. He can fight somebody else, and he took some big shots, and came back and still fought. So I definitely think he’s still right there in the line-up [of top welterweights in the division],” said Spence.

Thurman (29-1, 22 KOs) suffered his first career loss to Manny Pacquiao last month on July 20. It was a competitive fight, but started well and finished strong. Thurman’s last two fights have shown that he’s lost something from his game. He’s still a top fighter, but no longer the elite level guy that beat Porter and Danny Garcia.

“Because I’m the truth,” Spence said when asked why he thinks he can beat Pacquiao. “You know, I think I can beat him all around. And, you know, he’s awkward. I think I’m all around just a better fighter. And, I think I’ll beat Pacquiao. I think it’ll be a very exciting fight. Pacquiao is a Hall of Famer. I give him all my respect. He’s a blood and guts warrior, but I just think I’d be able to beat him,” said Spence in predicting a win over Pacquiao.

“It’s going to be an amazing moment when I get this knockout at STAPLES Center,” said Spence. “My whole thing is that I’m looking for the stoppage. I want to make a statement that I’m clearing out the division. I want Manny Pacquiao and all of the top names in this division.”

There’s a good chance that Spence will beat Pacquiao if the opportunity comes his way. It’s still unknown whether Pacquiao, 40, will agree to fight Spence. The Filipino star has the chance to fight him earlier this year, but he opted for a fight against Thurman. Amir Khan has been trying to lure Pacquiao into fighting him in Saudi Arabia. Perhaps if Pacquiao receives a big offer from Khan, he might take that match over the winner of Spence vs. Porter. Spence’s best bet for a big money clash after Porter is for him to face WBO welterweight champion Terence Crawford.