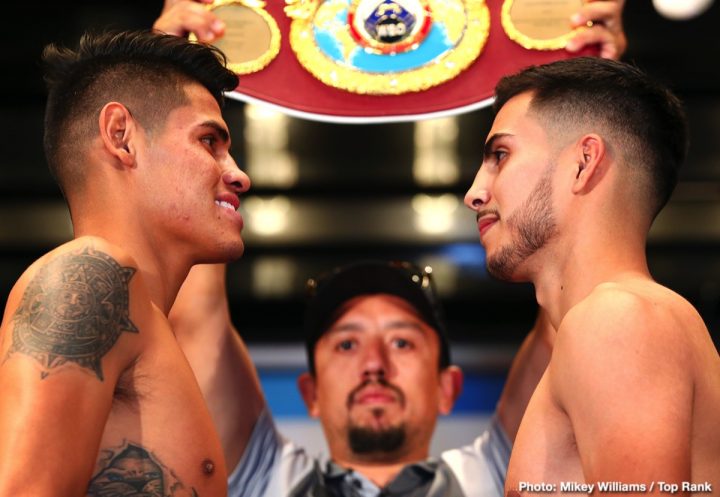 By Dan Ambrose: Emanuel Navarrete weighed in at 122 pounds on Friday for his title defense of his WBO super bantamweight belt against #10 WBO Francisco De Vaca for their fight this Saturday night on ESPN at the Banc of California Stadium, in Los Angeles, California. Navarrete vs. De Vaca card starts at 10:00 p.m. ET/7:00 p.m. PT. Undercard Streaming on ESPN+ at 6:30 pm ET/3:30 pm PT

In the co-feature, former WBO 122 pound champion Jessie Magdaleno battles the always tough Rafael Rivera in a 10 round fight.

The 24-year-old De Vava (20-0, 6 KOs) also weighed in at 122 pounds. Although De Vaca is unbeaten, he’s not faced anyone of note during his six-year pro career. De Vaca has wins over tough journeyman Christian Esquivel, Victor Proa and Ernesto Guerrero.

This is the second title defense for Navarrete (27-1, 23 KOs) for his World Boxing Organization super bantamweight strap that he won last December in beating champion Isaac Dogboe by a 12 round unanimous decision. At the time of the first fight, Dogboe was viewed as a talented champion that would hold onto his WBO title for many years.

Navarrete wasn’t viewed as someone that was a threat to beating the young 24-year-old dynamo Dogboe. But the size and the punching power of the 5’7″ Navarrete was too much for Dogboe, and he pounded out a close 12 round unanimous decision to dethrone the Ghanaian fighter. In the rematch on May 11, the 24-year-old Navarrete stopped Dogboe in round 12 in Tuscon, Arizona. Dogboe’s corner threw in the towel when he began to take heavy punishment.

With everything Navarrete has accomplished in the late eight months, he cannot afford to slip up against De Vaca on Saturday night. This is supposed to be a sure thing win for Navarrete, but you can never count out a young fighter that’s hungry.

“The reality is that my life has changed a lot in these last eight months,” said Navarrete. “The fact that I have become world champion and that I have won over a wide margin to Isaac Dogboe, who came from beating Jessie Magdaleno, makes me very happy.”

Lewis: ‘Joshua is disturbed; I accept his apology’ »