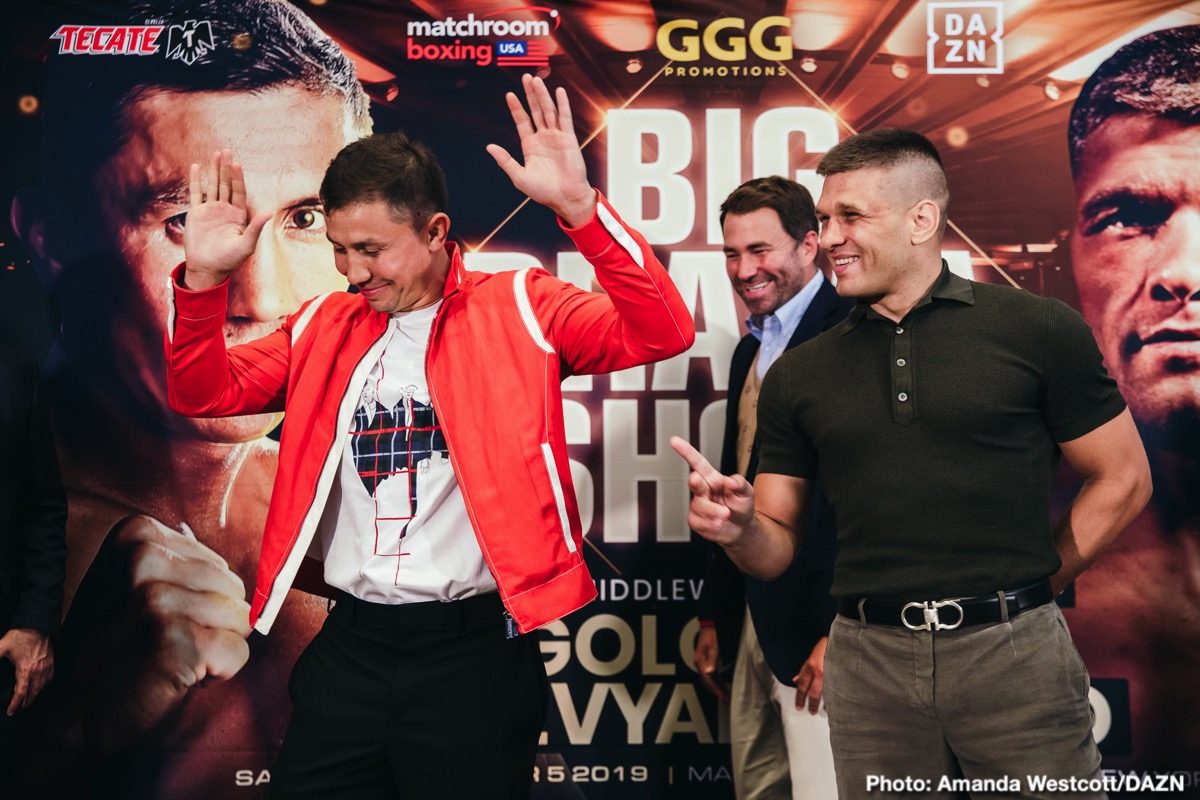 By Barry Holbrook:  Former amateur standouts Gennady ‘GGG’ Golovkin and Sergiy ‘The Technician’ Derevyanchenko met on Thursday to talk about their October 5 fight in the Mecca of Boxing at Madison Square Garden in New York. The fight will be streamed on DAZN. The talents will be fighting for the vacant IBF middleweight title.

Derevyanchenko, a fighter with 390 wins in 400 amateur fights, says he wants to end the 37-year-old Golovkin’s long 16-year pro career by knocking him out. Derevyanchenko, 33, doesn’t want to leave any doubt in the minds of boxing fans whether he deserved the win or not.

The Ukrainian has obviously heard all the complaining from Team Golovkin after their two fights with Saul Canelo Alvarez, and he doesn’t want to have his win tarnished the way the Mexican star’s victory was. Instead of taking the high road after his loss to Canelo last September, GGG and his promoter Tom Loeffler made it known they didn’t agree with the decision. Derevyanchenko doesn’t want Golovkin to muddy the water in the same way after he beats him, and that’s why he plans on knocking him out.

Derevyanchenko: GGG’s time is coming to an end

“I know exactly who I’m getting in the ring with,” said Derevyanchenko. “He’s the former Middleweight champion of the world, one of the best fighters in the world, but his time is coming to an end and I want to be the one that makes that time come to an end.”

The only way Golovkin will retire is if Derevyanchenko destroys him or dominates him by a decision. In GGG’s last fight against Steve Rolls, he looked very average for the first three rounds of the contest last June before turning it on in the fourth to get the knockout. That win was more about punch placement for Golovkin than anything, because he wasn’t hurting Rolls with his shots. In the fourth round, Gennady caught Rolls with an odd-looking looping shot that landed on he top of his head that hurt him.

Derevyanchenko says he’s going to try and KO him

“Everybody is saying that Golovkin is old,” said Derevyanchenko to Thaboxingvoice. “I cant’t see that right now, because he’s beating younger guys, and beating them convincingly. So I can’t count on getting an old Golovkin. I have to count that I’m going to get the best Golovkin. If I knock him out, then there won’t be any questions. I’m going to try,” said Derevyanchenko.

Derevyanchenko shouldn’t get too caught up with the age of Golovkin, because he’s not too far behind him at 33.  Canelo has created the blueprint in how to beat Golovkin by backing him up. He didn’t let GGG dictate the pace. Rolls, 35, was doing well against Golovkin until he backed up near the ropes in the fourth. That’s when things fell apart for him. Golovkin is a much different fighter when he’s coming forward than when he’s retreating.