Spence vs. Porter – Shawn threatens to cut up Errol 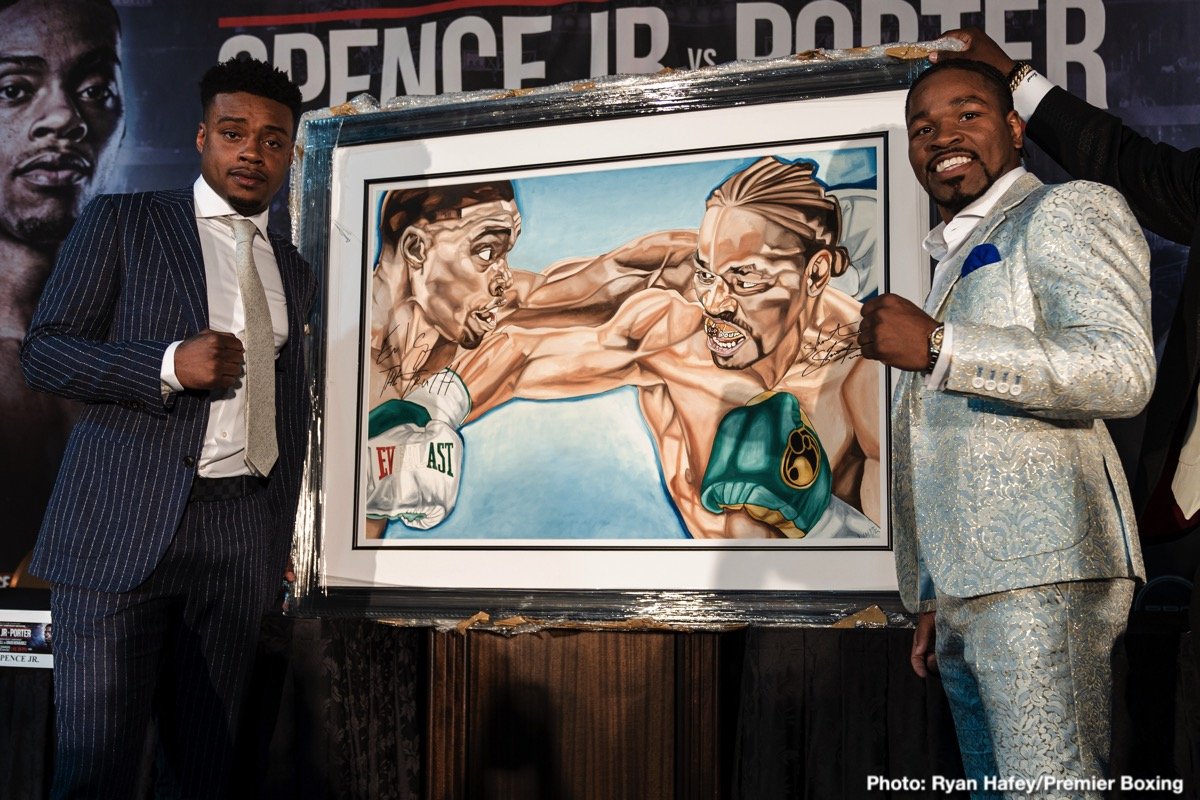 By Mark Eisner: WBC welterweight champion Shawn Porter is threatening to cut IBF champion Errol “The Truth” Spence Jr. with his roughhouse tactics when the to fight on September 28 on FOX Sports PBC Pay-Per-View at the Staples Center in Los Angeles, California. The card begins at 9:00 p.m. ET/6:00 p.m. PT.

Porter (30-2-1, 17 KOs) says he wants to see how Spence (25-0, 21 KOs) reacts after he cuts him on the night. Spence says the only way he’s going to get cut is if Porter catches him with an elbow or nails him with a head-butt. Porter isn’t denying that he plans on making it a dirty fight.

Can Spence handle getting cut early by Porter?

If Spence, 29, gets cut early, it’s going to make the fight interesting to see how he reacts, and adjusts to the blood. The fight could end early depending on how badly Spence is cut, because the ringside doctor won’t allow the contest to continue if there’s too much blood.

Spence: “I’m better than you talent-wise and skill-wise, and I know I got better power than you. You’re going to find out on September 28. I’m going to dog you.”

Porter: “When I cut you, we’re going to find out what’s going on.”

Spence: “The only way you’re going to cut me is with an elbow or a head-butt.”

Porter: “Right, because that’s what I do. I go in with my head.”

Porter: “I’m intentionally trying to be a dirty fighter.”

It’s difficult to tell if Porter is purposefully admitting to wanting to cut Spence in order to intimidate him or if he’s truly interested in hurting him, because it doesn’t make sense for him to be giving away his fight plans. Spence could return fire with fouls if he gets cut up by Porter, since he’s not going to want to get worked over. Porter bulldozed Andre Berto, Paulie Malignaggi and Devon Alexander with roughhouse tactics.

The undercard for the Spence-Porter card is loaded with interesting fights involving some well known fighters. Here are the fights:

These are some interesting fights, especially the Dirrell vs. Benavidez match-up. Those two are big punchers, and both of them are going to be swinging for the fences from the moment the fight starts. Benavidez, 22, has the youth the advantage, and he possesses the better engine. Dirrell tends to gas when he’s pressed hard.

Retirement or not, @Benavidez300‘s expecting the best Anthony Dirrell. pic.twitter.com/LHzQUkbgWb

Dirrell, 34, is getting up there in age, and he’s going to need to get to Benavidez early if he wants to win this fight. The longer this bout goes the more it favors Benavidez.