Broner calls out Canelo and Golovkin at 155 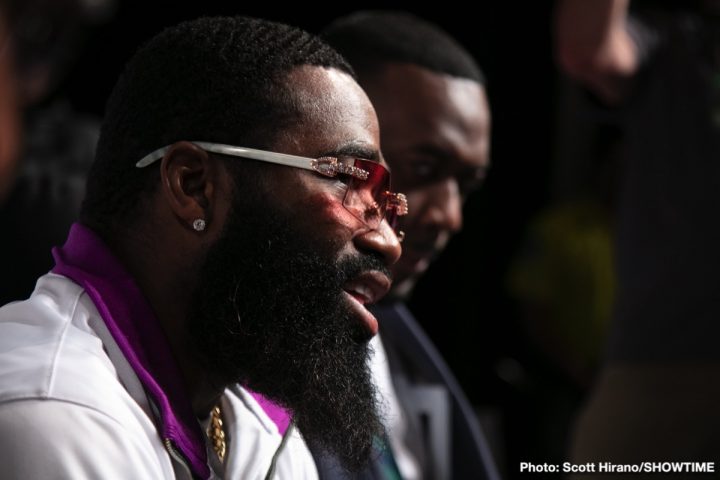 It’s good to hear that the former four division world champion Broner is so ambitious right now, because his boxing career has tanked since 2017. It’s been two years since Broner last won a fight.

Broner calls out Canelo and Golovkin

“I want to win a world title at 154, then fight Canelo at a catchweight 155, then to fight GGG at 155 too, then retire,” said Broner on his Instagram. “I love to fight and I want to fight the best in the world I’m a true warrior #KillOrBeKilled.”

Broner might not be aware of how this is going to look in the eyes of fans that he’s calling out Canelo Alvarez and Golovkin. This will be perceived like Broner, 30, is just looking to cash out with his career, and get one or two big paydays before retiring. If Broner can get a fight against Canelo or Golovkin, he would make a massive amount of money. Fights against both Canelo and Golovkin would bring Broner huge paydays.

The problem is neither of those fighters are likely going to want to waste time fighting Broner at this point. Broner is no longer a relevant fighter at any weight. That’s not to say that Broner can’t still get fights against top guys at 140, but he would be looked at as food for the young lions.

At 147, Broner has worn out his welcome, and has little chance of getting any of the top guys to fight him at this point. He’s lost to Marcos Maidana, Manny Pacquiao, and Shawn Porter in that weight class. At 140, Broner was beaten by Mikey Garcia.

Adrien doesn’t say who he would target to win a world title at 154, but it’s quite possible that he would go after the World Boxing Organization title once Jaime Munguia vacates the belt. Munguia is moving up to 160 after he makes a final defense of his WBO 154 pound title against Philip Allotey on September 14.

Broner would likely face one of these guys for the WBO belt:

If Broner wants to cash out, he needs to target some of the top guys at 140 or 135 to fight. Lomachenko probably won’t want to fight Broner right now, because he looks too needy.

Boxing » Adrien Broner » Broner calls out Canelo and Golovkin at 155