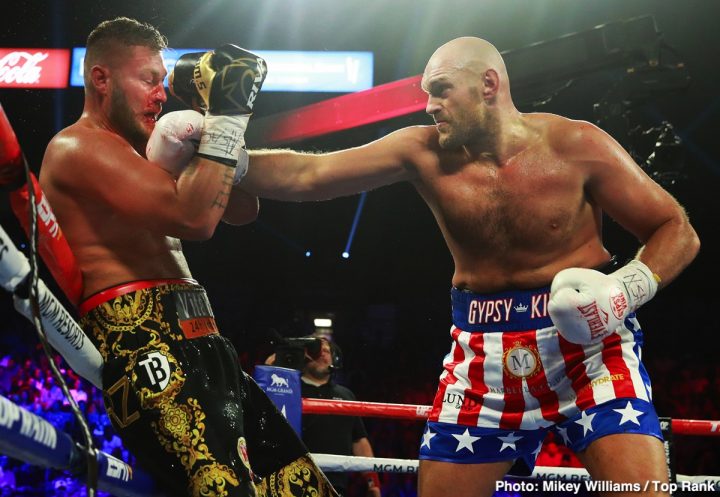 By Mike Smith: Tyson Fury has confirmed that the rematch is signed between him and WBC heavyweight champion Deontay Wilder for February 22 in Las Vegas, Nevada. Fury (28-0-1, 20 KOs) broke the news on Saturday in talking to ESPN, and says he and Wilder (41-0-1, 40 KOs) still need to win their next fights before their rematch is official. Other than that, it’s a done deal for February 22.

Fury, 31, will be defending his lineal heavyweight title against unbeaten #4 WBA Otto Wallin (20-0, 13 KOs) on February 14 on ESPN+ at the T-Mobile Arena in Las Vegas. Fury, 6’9″, is a big favorite to defeat the unheralded Wallin, who is being given a once in a lifetime type of Rocky Balboa shot. Wilder will be defending his World Boxing Council title against Luis ‘King Kong’ Ortiz (31-1, 26 KOs) in a rematch on November 23. The fight still hasn’t been announced, but they’re definitely facing each other next.

“The rematch is signed for February 22, Las Vegas, Nevada,” Fury said to ESPN about his rematch with Deontay Wilder. “I broke it [the news] on TV. If we both get through our next fights, then we’re going to fight on February 22,” said Fury about his long awaited rematch with Wilder.

This is a huge fight between these two giant heavyweights. They fought to a controversial 12 round draw last December in Los Angeles, California. While Fury and his boxing fans believe that he deserved the win, the judges saw the fight as even. They scored it 115-111 for Wilder, 114-112 for Fury and 113-113. Wilder landed the harder shots in every round, and knocked Fury down in the ninth and twelfth rounds.

The referee could have stopped the fight in round 12 after Fury was knocked out cold by Wilder, but he gave a count until he regained consciousness. You don’t see to many referees playing like that anymore, because it’s too risky to give a count to an unconscious fighter.

Wilder and Fury were supposed to fight each other last May, but Top Rank threw a wrench in the works by signing Tyson. They decided to let the Wilder-Fury rematch marinate by waiting a year. In the meantime, they matched Fury against a tall German heavyweight Tom Schwarz, who he destroyed in two round last June. Fury will be fighting another Schwarz-esque heavyweight in Otto Wallin on September 14. Wallin is on the same level as Schwarz in terms of talent or lack thereof.

“Well, as I always say, I am the most real champion in the business and, as I mentioned before, I must handle all my controversial fights as soon as possible,” said Deontay Wilder.  “Luis Ortiz is the first and then Tyson Fury. In no way (am I) looking (passed) Ortiz. He’s a dangerous fighter, but I’m looking through him.”

Wilder cannot afford to overlook the talented Cuban Ortiz, because he almost lost to him last year in March in their fight at the Barclays Center in Brooklyn, New York. Ortiz hurt Wilder with a left to the head in round seven, and came close to scoring a knockout. The fight was a seesaw battle with both guys landing huge shots. Luckily for Wilder, Ortiz gassed out in the ninth round, and was hurt by a big right hand to the head. In the 10th, Wilder finished off Ortiz in knocking him down twice. Wilder will has a lot tougher fight on his hands against Ortiz than Fury does in fighting Wallin. Former IBF/WBA/WBO champion Anthony Joshua wasn’t too impressed with Fury fighting Wallin, because he beat the Swedish heavyweight in the amateurs. He doesn’t think much of him.

Broner calls out Canelo and Golovkin at 155 »